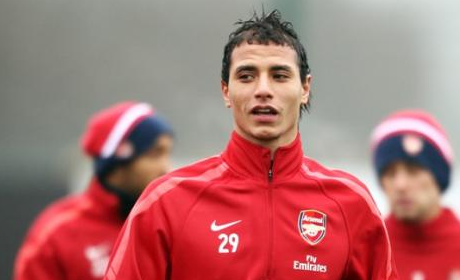 Arsene Wenger’s new-found admiration for playing fringe first-team players in the Reserves paid further dividends last night as five members of his squad helped the second-string dispatch of a young West Brom side at Underhill.

Ju Young Park got on the scoresheet with a fine finish in a 3-0 victory, whilst Johan Djourou was impressive at centre-back. Full-backs Carl Jenkinson and Andre Santos got forward well as they received some much-needed game time, whilst up front Marouane Chamakh’s lack of success in front of goal continued, although the Moroccan did demonstrate some good link-up play.

Despite the involvement of the first-team contingent, though, it was two younger members of the side who stood out most, with Chuks Aneke and Serge Gnabry, who scored the other goals, impressive throughout. Aneke has returned in impressive form since a frustrating loan spell at Stevenage, whilst Gnabry, at just 16, continues to cause havoc for opposition defences and, given that he is highly regarded by the club’s coaching staff, seems set for a promising future.

With such a strong side in comparison to their opponents, it was perhaps to be expected that Arsenal would win this game by a somewhat comfortable margin. West Brom offered little by way of attacking threat, but the Gunners were professional throughout and the presence of the first-team players seemed to bring out the best in their younger counterparts.

First-team players have turned out at this level before, of course, but now it seems that Wenger is more open to the idea of allowing a group of individuals who aren’t receiving regular run-outs to gain some match practice. With only three more Reserve games remaining this season, the policy is likely to continue until the end of the campaign, especially with the likes of Jack Wilshere possibly using the second-string as a foothold on the way back to full fitness.

There is something of a downside to this in that it means fewer members of Steve Bould’s under-18 side will get game time at Reserve level, but, as the likes of Gnabry have shown, if you’re good enough you will still be provided with opportunities and this is likely to spur on those not involved to raise their game.

Don’t want to hype the kid up but Serge Gnabry looks a class player.

Agreed, but let’s just leave it at that.

And he is only 16 and on the club lists him as a First Year Scholar!

Glad to see the two full backs up and running again.
They were both looking pretty special before the injuries.
Such a shame about Barnet’s ground.
I almost wish we would buy underhill just so the reserves have an open place to play. I don’t think you learn as much behind closed doors.

And another German at the Arsenal! I guess the sausages they serve at Colney must be extraordinarily tasty.

Must certainly be better than the ones at our ground. Probably cost less too!

Use to love going to Underhill with the Dad and Brother seen alot of players play there that have gone on to have great careers. Remember Arsene being annoyed at me when i asked for his autograph because a player was injured, remember Ray Parlour using my pen to sign about 20 peoples autograph, a mate of mine tried to get junichi inamoto’s signature but the pen ran out and he carved it into the page. When Eduardo came back from injuring the crowd that turnt up were great. Sol Campbell, Almunia and maybe even a young Cesc Fabregas i… Read more »

manfredi
Reply to  BC

that song, he comes from a place near iraq is just so dumb…make arsenal fans like BC seem so ignorant and stupid.

There is nothing wrong with providing competition for places at all levels in the club. If the youngsters want to break into the 1st team they will have to outshine 1st team squad players. Also the youngsters could learn from the more experienced players. Ultimately that is a good thing for the players and the club.

What kid wouldn’t feel great when he’s scoring more and running rings round players like Chamahak its good to see he’s had some real use here.

Still a little puzzled as to why Park has had almost zero opportunities in the first team. Guess we have to trust Arsene on this, we don’t see him day-in, day-out.

Like how Stuart Downing and Andy Carroll together are worth £60m.

Chamakh has played 2 games in the reserves this season the same as Park and he hasn’t scored any goals unlike Park who has scored 2 or is it 3? (not sure now). Anyway my point is I hope we put him out of his and our misery in the Summer.

Hey guys who is the man in the picture? looks familiar…