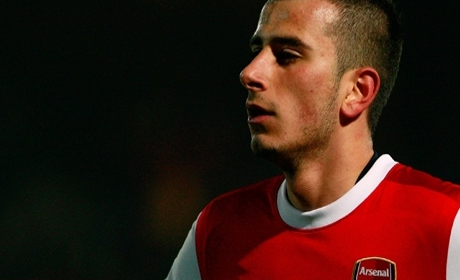 Amidst all the belief, hope and, ultimately, pride in valiant defeat last night, the fact that a promising 19 year old midfielder came perilously close to making his Champions League debut for the club against seven times winners AC Milan went largely unnoticed.

Oguzhan Ozyakup, a Dutch born youngster who recently switched his international allegiance to Turkey, was sent to warm up on several occasions and looked poised to be coming on at one stage before Arsene Wenger changed his mind.

In normal circumstances, Ozyakup wouldn’t have been anywhere near the matchday squad but, with a midfield casualty list containing no fewer than seven first-team players, he was called upon to make up the numbers.

He has certainly enjoyed a proficient season to date, often starring for the Reserve team as either a deep lying or, increasingly, an attacking midfielder, creating numerous chances for others and finding the net five times himself. Extremely comfortable on the ball and possessing pinpoint passing accuracy, Ozyakup made his first team debut against Shrewsbury in the Carling Cup earlier this season and added to that with another cameo against Bolton in the following round.

Wenger, has, however, hitherto been reluctant to deploy him on the big stage. Ozyakup was left unused on the bench in the final group game this season, a dead rubber away to Olympiacos, and was similarly neglected yesterday, suggesting that a loan spell is likely to be required before he is to make further inroads on the first-team picture.

Just a year ago Ozyakup was sat watching from the stands as Arsenal beat Barcelona at Emirates Stadium in the Last 16 of the Champions League. Last night he got a step closer to the action, but the final step, to actually make it onto the pitch, will be the biggest task of all.

There is something of a chasm between Reserve football and loan spells in England’s lower leagues. Fellow midfielder Chuks Aneke recently returned from a loan spell at League One Stevenage where he struggled to impose himself and Ozyakup will be wary of similar pitfalls, having previously stressed that he will not leave Arsenal on a temporary basis until he finds the right club to go to.

At stages last season it appeared Ozyakup was close to an exit from the club, as he deliberated on signing a new contract, but eventually agreed a new deal and his confidence has been reflected in his subsequent displays at second string level.

He will be all too aware, though, that this is only the beginning and much effort will be required to make the step up.

I know. But if i gave him the wizard then he would look like he’s from that place down under.

I was hoping he’d come on later , We needed more creative players to break them ,Song and Rosicky were getting tired , Park and Chamakh don’t create.

Anyway an impressive Pre-season and an ‘adapting period’ with the first team with few apperances next seaon should be enough to attract EPL club to loan him next January Like Frimpong and Miayichi .I hope it happens this kid is awesome and He is the only Arsenal player who can take set pieces

That captain of ours can strike a decent “dead ball” and all.

RVP can’t take a set piece? Arteta? Oh and that 18 year old kid who assisted our first goal yesterday from a corner? Yeah they are all quite poor aren’t they…

Shame he didn’t come on towards the end when Theo and The Ox were out of gas. Would have rather seen him add another body to the middle of the field to get some possession back rather than chucking Chamakh and Park up top.

i remember he was putting on his shin guards and was all warmed up.

I had hoped, he would have been brought on to replace AOC, plus Afobe! Instead of Park. But look it is over, Arsenal played deliciously.

If only we had shut up shop in Milan when we were two goal down???? But all our yesterday’s are no more!

Comedian
Reply to  The BearMan

I saw Park making more contributions than Chamakh. Saw him defend and track back for the ball ,control the ball near the oppostion D only the to be taken away from his feet by Chamakh.

To be fair Park had to cover more ground playing where he was. Also by the time Chamackh came on our creative players had lost their legs.

We should of been putting balls into the box late on.

Thought he’d have made a bigger impact than Chamakh. I feel he’s a great prospect and think he’s now too good for the reserves.

Chamakh out and Park out, please AW.

Bring in Podolski.
And give Campbell, Ryo, Afobe a chance.

Shouldve chanced him ahead of poxy chamakh

Should have come on for Ox imo. Ah well, I’m not the manager 🙂

I’m at least glad we have some talent there when the injuries hit.

In the last 20 minutes we needed 5 midfielders on the pitch to supply RVP. Wally and the Ox needed to go off- Gerv was useless all game. We should have played Ozzy for one of them but with Frim, the Coq, Ram, Art, Wil, Diaby and Benny unavailable– what the hell could he do? Considering they had a full team out– Arsenal were epic, deserved to do it but didn’t. I agree with AW that the ref helping Milan at the contact area was a crucial factor and kept them in the second half. Like many refs- he was… Read more »

let’s hope at least when AW reviews the game he realizes that on that one point of not putting Ozy in and instead sticking with his favourite Chamakh that he goofed. Unfortunately, as AW puts it, he doesn’t have to answer for every substitution he makes……

Yeah, especially to you.

word of the day: hitherto