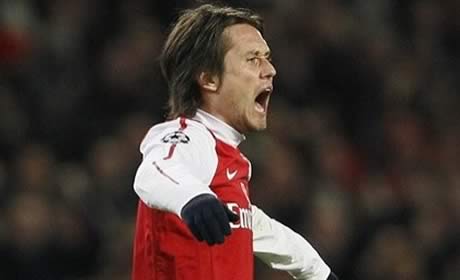 Tomas Rosicky says he thought Arsenal were going to achieve the almost-impossible against AC Milan last night, going in 3-0 up at half-time, but says he’s proud of his teammates even though the Gunners couldn’t manage to find the fourth goal.

The Czech midfielder was outstanding again, scoring Arsenal’s second, and providing constant drive and energy. With 45 minutes to find a goal that would bring the game to extra-time, Arsenal found it impossible to break down a Milan side much improved from the first half, even if Robin van Persie’s 59th miss will be a talking point.

“We’re very disappointed,” he said. Sometimes miracles happen and you could see we came very close today. We knew that we had nothing to lose so we just said to each other: ‘Let’s go for it, let’s give our best and we’ll see what happens.’

“When I scored I felt we could score two more because we got an early one which definitely gave us a boost to start with. When we scored another one I really thought we would make it.”

“We said [at half-time] to keep playing the same way,” added the 31-year-old. “You could see in the second half there was a drop because we had given so much in the first half but all the same we had a chance to score the fourth one.

“It’s difficult, though; you can’t blame anyone after tonight’s performance. I’m very proud of my team and what we produced today. We’ve beaten AC Milan 3-0 and we’re going home disappointed. It’s a bit funny. But we blew it in Milan.”

He looked more distraught than anyone at the final whistle but it’s good to hear he’s taking the positives from what was, despite our exit, a restorative night for us in Europe.

Give the Little Mozart an extension. Quick!!!

For all the talk of him not scoring in two years he is one goal away from equaling Torres in his entire time at Chelsea. Not that goals were ever the only benchmark that Tomas was judged on but he’s starting to score goals and his sudden burst of pace is so surprising. I really hope he stays fit and stays on to guide the youngsters and hopefully add a few medals to show for his time at the club. Top player!

We are all proud of you guys last night! It was totally worth it to wake up at 3.45 in the morning just to watch you guys. Keep the momentum going Tomas. It will be worth everything at the end of the season after what was simply our worse start of the season earlier. No one give us a chance to be where we are today.

Wow. 25 thumbs down. What I meant was, it was funny how we demolished Milan 3-0 and didn’t go through the next round. So… Yeah. Was just agreeing with Rosicky. And he has been one of our consistent players this season. Doubt we’d be in fourth place if not for him.

Our present midfielder shortage killed is blogger said. We just didnt have the quality on the bench to maintain momentum.

I’m surprised no one has mentioned Arshavin in relation to this – could have really used the Russian last night.

And we are proud of YOU. You in particular.

Me too, Tommy. I have to admit I was not positive about us ‘going for it’ last night. I guess I couldn’t see past all the potential injuries to our key players. But after watching last nights game I have to give credit to the manager and team for putting up a fight worth remembering. I’ll also have to admit to being quite ashamed for not believing that the team could turn it around, in the end they didn’t but what a fucking effort they put in. Some pride is restored, now let’s continue in this vein for the remaining… Read more »

let me say it out loud and honestly do u think Rosicky deserve a new contract ? i would say Absolutely he is 31 years yes but we need such experience he is amazing , outstanding and i am sure he can help the like of ramsey and young players to develop well especially under his talent he is a clever Midfield he is being outstanding . i salute our brave Gunners who made us proud . OX is amazing he is 18 playing against Milan. Song what a solid defensive style but sad he looked tired count how many… Read more »

you are the best player at AMC position in the team.Wish you be our Scholes.Ramsey can learn
from you.

Rosicky, for me, has what even Cesc never had. Heart of pure gold with tiny cannons running thru em instead of blood.
Nothing less than a 100% is a norm with him.
Class!

Shame that Rosicky has never won any thing with us since he has joined. Although if he continues to play the same way, I’m sure we can change that next season some how.

Thou i neva blief we cud progres,u guys do us proud by restoring our pride.no quality on d bench killed our game.all d same,proud of u guys.WILL NEVA CEASE 2 B A GOONER

as soon as van persie was able to leave his injuries behind and get a decent run of games he bloomed. the same goes for rosicky, he was always unlucky with injuries but now he got a few games together and can show his quality… who will be next? diaby?

Well worth a long trip down from the northern wastes to the Emirates – what an atmosphere, great support from the crowd and a privilege to see such a committed performance from the team.
Welcome back Rozzer, looking like the player you were when you first joined us.

the proudest night as Gunners, battle with spirit until the end.

Stay fit. Fight for third this season. And next season we shall conquer all! Not improbable judging from our last 3 games. We got what it takes! COYG!

Rosicky was excellent. I love him.

TR7 finally living up to the expectations I had when he came to Arsenal! He is a class act, and everyone loves playing with him. He’s got brilliant ability and great awareness, always finds space for himself to turn in midfield and push deeper with the ball, even when the midfield is tight. Seriously hope we can keep him fit and injury free, with each game you can see his confidence building, his game improving, so I must say I’m hoping for more good things from him. A few more goals for him this season and hopefully he can build… Read more »

if it wasn’t for RvP’s 35 goals or whatever it is this season Rosicky would be player of the season so far.

Brilliant to see such a good guy have some good fortune with fitness and show the talent he obviously has. A cool head just when needed!

On another matter, gotta love Szczzy for this http://www.thisislondon.co.uk/sport/football/english-players-are-running-chelsea-says-wojciech-szczesny-7543706.html. This deserves to be a story on Arseblog news. I love this “I’d be really pleased to see Tottenham in the Europa League next season.” LEGEND…

TR7=legend….on a side note wenger should get on to extending AOC contract tie him down for life kid is talented!!!!

Read the article London Gooner posted, absolutely hilarious what a hero…what’s almost as amusing is the comments from the chav supporters talking about “big club” Chelsea…HAHAHAHA 🙂

Sorry Barnet Gooner not London Gooner – I am an idiot. Ta

Rosicky for Ramsey was always the change we needed. I remember typing it here few weeks back and getting a few thumb downs. That position is crucial to the style we play and Ramsey struggles to interpret the role with regularity and consistency. I love Rosicky.

sorry to put a pisser on it all but did anyone notice either chamack or park when they came on. Not a peep out of either of them. Such an oppertunity to make a huge name for yourself and boost your confidence, but i cant say i saw a single pass, creativeness or surging run into the box. this could have been a huge night for either of them and all they did was jog around for ten min and pick up a cheque at the end. MILAN AT HOME,GO DO ANYTHING TO SCORE, even if that means hiring a… Read more »

TR7 has being brilliant recently, hopefully he can stay fit and get a new contract his experiance is needed and when on form he can be one of the best around