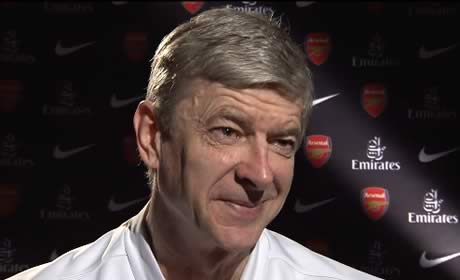 Having been charged by UEFA for what seems like the millionth time in recent memory, it’s fair to say Arsene Wenger is unimpressed by the treatment being dished out to him by Europe’s football governing body.

Facing another lengthy ban, after allegedly using naughty words in the vicinity of official Damir Skomina following the Slovenian’s whistle-tastic officiating in favour of AC Milan on Wednesday night, Wenger made clear his contempt when questioned by assembled press at London Colney.

“I keep my line of conduct until the end as ‘no comment’. But I think I’m quite surprised,” he said. “I’ve played 200 European Cup games and the situation is becoming a little bit surprising.”

Asked if he felt justified by what he’d said to the referee, the boss responded, “Yes.”, with a somewhat rueful grin on his face.

AW was equally dismissive of suggestions that Roberto Mancini talking about Robin van Persie would prove unsettling to the club or the player.

The Italian was quoted in midweek saying van Persie was one of the best players in the world and that City were always interested in those players. He then rather transparently backtracked saying he hadn’t said anything about wanting to buy the skipper, but for Wenger it’s just part and parcel of football life.

“Nothing is unsettling and at our level we are professional people. I believe if you have one quality it is not to be unsettled by what people say about you, or what other clubs say, that’s part of the job.

“Our plan is to keep Robin van Persie even if we buy any player. Robin is the leader of our club, and I was just like to specify that he is not out of contract.

As they say in Italian, ‘Stick that up yer hoop, spaghettio’.

Dont mess with AW mancini. you know you have one more game with us…might be title decider. up the Arsenal

To be fair the Italian Hair Dresser, he was asked a direct question about what he thinks of RVP and he answered it just like our manager answered the question about Hazard. But, he also said, I think RVP will stay with Arsenal.

Yea but that makes him look like he knows RVP’s intentions, that is a bit arrogant for my test….i remember he tried similar speech about that cunt he bought from us. i dont like the guy. he should be banned from having opinions about The Arsenal players. fuck off mancini

Well, he also said he was sure the Manures will beat the Spuds and he was proven right as he knew Spuds are Manures bitch.

That was funny when he said it though, it got on the Spuds nerve.

‘Stick that up yer hoop, spaghettio’

Wanting to keep rvp and signing the quality players and offering him a wage that matches one of the worlds best players are different things.
These things will help rvp sign not the sort of words we heard when cesc and nasri were said to be staying. Hopefully the club will be honest about things this time round but I won’t hold my breath.

Once punched in the face by the SZCZ senior, he should shut up before he gets another SZCZknock out

Is it really true that Podolski is coming to the Arsenal? Him and RvP (I am assuming we keep him, if not I will be shocked) may be a very lethal duo. How would we play them together? Any thoughts?

Goldi can play on the wings.

Connor. Nothing is signed as its not a transfer window. People really need to calm down. Koln still have an outside chance of relegation.
Arsenal fans are up in arms because Mancini said he would love to sign rvp, who wouldnt?
Imagine if he said yes we have already agreed to sign him. We would be going fuckung mental.

Don’t you think he would’ve denied it by now if he wasn’t intending to join us? It’s been a couple of days. The silence is deafening.

And Wenger and Per’s little smiles when asked about it. Those were the most telling for me.

You can sign contracts out of transfer season, it just won’t take effect until the specified transfer window.

Btw everyone Mancini didn’t say much when asked about RVP other than compliment him and he did say that he an important player for us nothing else the media are still up for stirring glad AW didn’t say anything regarding this because there wasn’t anything in it.

When asked ‘are you phased about Mancini’s remarks that every good club will want a striker like Van Persie?’ he simply said ‘No, we are a good club’
Love that man

Are we a fuckin’ feeder club for City?! If it wasn’t for Barca and City we would have dominated Europe for the last decade! Grrrrr!

No, we’re just smart enough to get rid of cunts for a good amount as they don’t deserve to represent the The Arsenal. Look at that chinless lesbian cunt and Adebawhore. They feel right at home at City with their fellow cunts.

I hope this time he mean it about RVP, and do not let him go until end of his contract. as i remember he said the same about Nasri and Fabergas. let hope that he mean it or he buy world class player instead of RVP and we need atleast 2 attacer infront line.

We are a selling club. We will sell to the highest bidder. At the moment it happens to be city. They will continue to plunder our club until our philosophy on what we consider to be a successful club changes.

You`ve too much violence in your imagination, boy 🙂

Spot on. Even if some of our players wanted to go, we should never have sold them ti City. You don’t sell to your rivals.

Adebayor and kolo were hardly success stories there, nasri looks to be going the same way, so I think we did the right thing taking more money than those players were worth. Now if we had sold them Cesc, or sell them RVP or Jack that’s a different matter.

Volders, from looking at our accounts it seems that until we are going to have to sell until our commercial deals can be improved. If we hadn’t sold Cesc/chinless cunt we would have made a loss. Let’s hope we can get the crap off the wage bill and start being sensible with new contracts.

Darren dein,. Our players,.. & man city,.. hmmm. arsenal need to signal their ambition by offering RVP the contract the lad deserves. AND by signing “super quality” players to play alongside him, arsene Wenger is an intelligent man, hopefully he Will have learned from the whole situation with cesc & na$ri (cunt) last season. as for Mancini, I find him arrogant. but he is also clever enough to know what he can & cannot say. I gotta ask though what the hell is he gonna do with all his strikers? he can’t play all the ones he has as it… Read more »

Boy ? What sort of Chav language is that.

He’s a Norwich fan, I think.

When Wenger says that he has a contract until 2013, perhaps he is signalling that he will not let Robin go whether he wants to leave or not. And you must ask the question: Is getting 30m for Robin better than potentially dropping out of the Champions League positions. This is the quandry the club faces if Robin wants to go. Although, let’s all hope that Robin wants to stay. If Na$ri is a reference point, I think we can all say that Robin’s case is very different. I personally think Robin loves the club more than Cesc did as… Read more »

Corp, your right, I think that’s the key to a lot of our troubles and future deals. Get rid of some of the crap on high wages. Pay rvp what’s he’s worth and start paying top wages to top performers.
Keep rvp sign podolski and a top quality midfield player or two and we won’t be far off winning proper trophies. Let rvp go and may as well turn the lights off because no one will trust arsene or the board ever again.

Moyes you are for sure a Dick please stick yourself right up the spuds. Come on Everton!

Whats fucking spuds putting thumbs down for? Come on you toffee cunts.

What Arsenal supporter would thumbs down that?

[…] I’m talking about. For example I’m fairly certain that I want to say something about Arsene Wenger talking about what irredeemable cunts UEFA are. But you see he didn’t say that exactly. But […]

Give RVP what RVP deserves and shut the mouth of those arrogant Citeh!!

In Moyes we trust ha ha