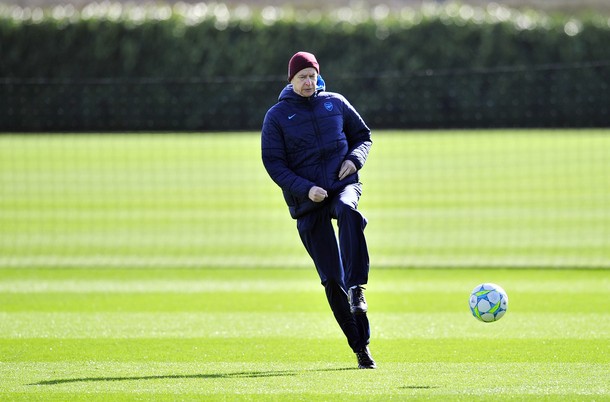 Arsenal have confirmed that Steve Bould and Neil Banfield have joined the club’s first team set-up.

Bould, as Arsene Wenger stated a couple of weeks back, will be the new assistant manager, while Banfield is the new first team coach.

“I have always felt it is important to have people around who understand what this great Club is all about,” explained the boss.

“With Steve and Neil joining the first-team staff, it ensures we carry forward our traditions and approach in a consistent way. I am looking forward to working closely with Steve and Neil and wish them every success.”

The duo, who have progressed from coaching the under-12s and under-14s to the Youth team and Reserves respectively during Wenger’s time at the club, have, as you might have expected, spoken with pride about their promotions, while both stressing their desire to maintain the manager’s footballing philosophy.

“It is more than excitement, it is an absolute privilege and an honour,” Bould told Arsenal.com.

“I know I have some big shoes to fill with Pat having spent 44 years at the Club and that is going to be the hard part.

“There is a brand and philosophy that we have to play. That is No 1 whether it is youth players, reserve players or first-team players.

“All of our kids have to be technically sound and able to play and that is the basis we all work off. First and foremost is the philosophy of the football club and the manager.”

Explaining that he thought the boss was inviting him in for a chat about why he’d be staying with the Reserves, Banfield rather charmingly relayed what happened when he was told of his new position.

“The manager invited me into his office, and with Steve Bould going up to be assistant manager I thought that he may have pulled me in to explain his decision. To me it was a logical move anyway, but I thought it was nice of him to explain it to me.

“Then he told me he wanted me to become first-team coach, and you could have knocked me over. I was a bit gobsmacked to be honest, but after the initial surprise and sense of achievement inside, I was just delighted.

“I am absolutely delighted, it is a dream come true. To think I am now going to be first-team coach… well I pinch myself sometimes. I am really looking forward to it.”

You can’t fault the enthusiasm of either man, that’s for sure. Congratulations to them both and may they both be successful in giving Arsene big hugs, laying out cones and pinning unruly slackers against the dressing room wall with gusto.

An announcement on who’ll be taking over the Youth Team and Reserves is expected shortly.

Looking forward to Bould’s contribution to the first team!

Let’s hope he’ll develop smoothly into a potential candidate for succeeding AW which at some point will be a question that needs to be solved carefully. Referring to their philosophy etc. (cf. article) I wonder whether the club will limit potential AW successors to candidates that come from within the club?

I don’t think the next manager will be a promotion from within the club. I think he’ll be from outside the club but one who is aware of the traditions of the club & one who would use the existing coaching structure at the Club rather than have his own staff.

Hope not, hope they’ll limit potential successors to candidates best suited to a complex and difficult job. Bould and Banfield may well be ideal assistants to Wenger – they all know and trust one another, they understand one another’s ways – but that’s a long way from saying either of them have the necessary experience and abilities to be his successor. Besides, given the importance attached by Kroenke to the club’s brand, he’s likely to want someone with a higher profile internationally – a Guardiola (say), in the event he’s still available when Wenger steps down, or (my choice) the… Read more »

next manager? pfft. Arsene’s going to be winning doubles and trebles for another 15 years. wait and see

Can’t wait for the next season to start..

Can we bring in Jens to be a youth/reserves coach just for fun??? Think of the hilarity…

tsk. think of our future!

Does that mean Boro Primorac will stay on as first team coach as well as Banfield?

Anon
Reply to  The Calm

Think Boro Primorac leaving would be real big, as some journalists I read from feel he’s part and parcel of Arsene Wenger’s coaching set-up, so no doubt yes.

Let’s get another great in the U18’s

He’s got no hair but we don’t care

I’m unclear about the distinction between the roles of Bould and Banfield, particularly as Primorac is still around? How do they all separate out duties?

I ask a question I’m hoping someone will know the answer to, and I get a thumbs down? Some people are idiots.

Haha yeah that’s true. I was asking myself the same question, what is the difference between assistent-manager, first team coach and all the other first team coaching staff?

That is hilarious. Don’t ask questions!

That was me. Was trying to keep a low profile and would have suceeded were it not for you pesky kids.

Bouldie is in charge of cones

Banfield is in charge of bibs

Primorac is in charge of the half time oranges

ryo likes cones.so that technically leaves bouldy jobless?
or maybe wenger will consider loaning ryo for the sake of bouldy.

Thanks for putting that song into my head again.

Thanks a fucking bunch.

hahahaa The Bould and The Banfield. Goodness me how i love this website.

seems alot is going on in arsenal as a club.next season definitely will be special. glory is not far from reach. Arsenal till D.I.E.

Anyone smell an FA or Carling Cup next season?

yeah i can see them winning F.A cup and bould and banfield going naked in the wembely dressing room.

great choices brianh but since Chelsea got uefa.I have been having very high hopes.I’m yet to get over it.

bring on the killer Bees!

Both great additions to the first team coaching squad. Now all I hope for is the DB10 return to coach the attacking rumors are true.

Side note: Just read that Bayern Munich have put in an offer for Matias Suarez. Looks like we won’t be seeing him at Arsenal.

Here is what I want to happen
Our trophy drought will end in 2012-13. We will win the league. Cesc will get bored at Barca and realize his true home is at Arsenal. And he will be the catalyst and big superstar signing that will help us defend the league (for the first time under Wenger) and win the Champions League in 2014 (I don’t think it will happen next year.)

Then we go on to win more trophies and get the bigger sponsorship deals, hell LIVERPOOL gets 20m a year from Standard Chartered and around 20-25m per year from their kit makers. Imagine the kind of money Arsenal will be able to get! By 2020 the debt we have will be miniscule and we will be among the top 3-4 clubs in terms of revenue and 3rd in terms of value. Also, Wenger will win the manager of the decade award for the second time and (if they work) the Financial Fair play rules will mean that Arsenal is the… Read more »

Anyway, enough dreaming, I am glad about the appointments. I hope they bring some fresh ideas and the team gets to hear some new voices for a change. Our defense has gotten weaker every year since 2008. That is total bullshit. I remember when the times when we used to be 2-0 up and everyone would know that the game was over. Now we can’t even defend a 4 goal lead. Tim from 7amkickoff said it perfectly. “There is too much mental. Not enough strength.”
Hopefully that changes in 2012-13.