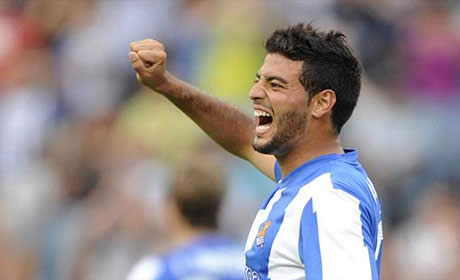 Carlos Vela will meet with Arsene Wenger in London to discuss his future after a productive season on loan in Spain.

The Mexican scored 12 goals for Real Sociedad helping his team to a comfortable mid-table finish, and will tell the Arsenal manager he wants to leave the club to pursue a more permanent La Liga deal.

Last month Vela spoke about his desire to leave and the interest Sociedad had in keeping him, but such is the financial situation at the Basque club they seem unlikely to be able to afford Arsenal’s asking price, while Vela knows any move is dependent on Arsenal.

Catalan daily Sport reports interest from Salamanca, Celta de Vigo, and Osasuna, as well as Real Sociedad, but claims that Espanyol have made him their priority this season, having been impressed by him when he scored twice in three minutes against them last month.

Vela’s agent, Eduardo Hernández, has already spoken to Espanyol and the Barcelona side must now try to find an agreement with Arsenal over a player who has a contract until 2015.

Whether Arsenal are willing to lower their price to get a player off their books, or if they’ll look to loan him out again remains to be seen. However, Wenger rarely keeps a player who doesn’t want to be at the club and Vela has been quite clear about his intention to stay in Spain on a permanent basis.

£3-5m and his wages off the bill would be great.

3-5million pounds for vela?who is going to pay that amount for him?
sp*rs?

Sad that he couldn’t click at Arsenal. I definitely thought that he’d make it big here. Funny how it sometimes doesn’t work out for seemingly talented players.
Anyway, i doubt if any of the stated clubs will be able to afford our asking price. Didn’t know that Salamanca was interested. Seeing as he’s played a whole season there before, he might just be inclined (although unlikely seeing as they’re playing 2nd or 3rd division).
But it’s (almost always) all about the money so you never know.

He’s the best Chip master in the whole wold. Even before Messi or anyone else.

A small part of me will miss our Giggling Mexican, if only because there’s no one else who meets that description in the squad. Maybe could we make Vela more affordable to Real Sociedad by insisting that they take Park Chu-Young as part of the deal?

Sad that he couldn’t click at Arsenal. I definitely thought that he’d make it big here. Funny how it sometimes doesn’t work out for seemingly talented players.
Didn’t know that Salamanca was interested. Seeing as he’s played a whole season there before, he might just be inclined (maybe not – seeing as they’re playing 2nd or 3rd division). If its 1st Div football that he seeks, then i guess that Osasuna and Espanyol would be favoured.
But it’s (almost always) all about the money so you never know.

They have us over a barrel, they know we don’t want him and we want him off our wage bill and that he doesn’t want to come back here anyway. Just let him go for free if they won’t offer a fee and just cut our losses and hope that we have learnt the lessons that we should only give decent contracts to players one they have earned one on merit. Pay them a decent wage offer them a 4 year contact or whatever and if in the first few years they have progressed then offer them more with a… Read more »

I know there will always be footballers controlled by money or the allure of greener pastures but we’ve picked up a few bimbos in recent times that have just been wastes of time. Some we recoup exponential profits on, some we don’t but still disappointing to see talented players just go through the motions or have their heads turned.

Is he Kun Aguero’s twin?

Nick
Reply to  The invincible arse

LOL, when I saw that picture I was thinking how frighteningly similar he looks to Aguero! If only he could score the goals like Kun we’d be set.

tbh, the more I think about it, natural talent for most players isn’t enough. there are more who fail that have talent and no application than the other way round. when you don’t have enough skill, you usually find other ways to better your game, and this usually turns out clever and committed players. you can teach a certain level of technique if you get them young, but some players with great skills just can’t be arsed.. too much praise and reward too early usual beats it out of them. it’s not a shame if these guys don’t make it.… Read more »

Carlos Vela will make it to the top level of his game without Arsenal. Although i thought Arsenal was the perfect club for him, he was never happy in England.

wenger should let vela go n use d money 2 get other players.

No text speak allowed. Thanks.

I’ve slagged off all sorts and used all kinds of language on this site. But I never thought I would get pulled up for shortening the word ‘please’ .
How about smile faces? I’m not very good at showing my mood without dots and dashes, so I might be fucked on that account.

I think blog was replying to fisher more than you grape

@ Old Man Grape – I think blogs’ post was intended for the guy you initially replied to. Relax mate.

I need my eye sight checked!
well. it got me to read the comments policy, so thats something

How about Emoticon? add it up blog, it will be fun to show our emotion.

I think if we can get them to show up with 7 to 10 mil, they can have him. Or else loan him out…….what the harm…….the team where he is playing pays his wages, so he is off the wage bill anyway and who knows, with another 15 goal season, he might just develop into something good.

He has signed on till 2015, whats the hurry to offload him by underselling him. Loan him out and keep him off our wage bill anyway.

Alf Johnson
Reply to  Too Drunk To Be Offside

Not always true – Our favourite ex-player from Togo was still getting paid by ManCity when he decided to spend the season wearing a shirt depicting a chicken on a beachball.
Often the player in question is loaned out to give them some experience so the loan deal involves both teams paying a percentage of the wage.

JohnDale
Reply to  Too Drunk To Be Offside

He scored 12 goals for half the season, not the full season.

true word oldman,denison,vela,diaby,bendtner n co should move out of arsenal.

Vela doesn’t work hard enough so dont anybody say he would be a hit at our club. The form he’s in at the moment is good-and thats it!-any mid table team striker can pull it of (holt), Not good enough, I say take him of our wage bill and use it to upgrade rvps contract, besides with all this left footed strikers – an open book to opponent defense?. Completely out of topic: but I think, I hate $AMIR NASRI!….. He should have barbed fish hooks inserted in his scrotum & foreskin and be towed round the pitch by a… Read more »

Wow. The Nasri related lines inspire quite the visual.

I don’t think Jermaine Pennant has a driving license right now.. you might have to wait a while on that one.

Barton would be my pick. His recent Twitter rant against Shearer and Lineker had me in splits. Pure entertainment.

All of them, driving along a clifftop road, fighting amongst themselves for the wheel!!

Yep,couldn’t have put it better. Nasri is a disgusting, chinless muthaf*****r, I really despise that guy.

Nasri will rot once that dude Hazard comes around. Let’s all pray for that.

I think we should be able to get at least £7-10m for Vela. He’s undoubtedly a very talented player who’s still young, and he’s done really well in La Liga this season, so I don’t see why it should be less than that.

I’m not sure we could get 10m, since considering we paid 10m for Podolski, it would be putting them in the same category and Podolski has played for Germany a lot more than Vela for Mexico.

I don’t know exactly how contracts work, because sometimes when they are on a high wage, the transfer fee gets reduced (to compensate for the wage)….I guess.

let him go with a massive sell on clause in the transfer in case he comes good. some players take longer to mature than others and if he does i think he can still be a helluva player.

Sociedad fans say he was their best player and gave him a standing ovation in his last game. He took a while to rediscover his form but in the second half of the season he was La Liga’s fourth highest scorer with 12 goals and as many assists, only bettered by Messi, Ronaldo and Benzema – not bad in a fairly poor team. Sociedad want to keep him and are hoping they can get the price down from the 4m (euros not pounds) we’re demanding to 2. If they succeed and if he continues to improve in leaps and bounds,… Read more »

Wish wenger unleashes frimpong on Nasri .. he will know what to do with him!!

Now that is a wonderful thought. Frimpong would probably rip him to shreds, that chinless punk

Bang on billy, the sell on clause is exactly the thing to do. I rated him over some of the others we have out on loan but can’t sell. And he may come good but he clearly doesn’t want to come back and because of that his heart will never be in it for us now. Maybe let him go for free with an 80% sell on fee coming back to us.

Sell him for a transfer fee between 3-5 million with a sell on clause. It’s good business and it frees up room on the roster and lowers the wage bill. I like Vela as a 3rd option but if he were gonna make it on Arsenals team it would’ve happened by now.

I wish him luck.

Espanyol know we have problems offloading players and their financial situation is extremely bad. They want him on loan, and even getting 3 million euros from them will be very difficult.

Why not let the whole Nasri thing go,we all know he’s a prick….why give the cunt the satisfaction of talking about him

..how about? sell him for a decent price and let him go….Vela has been with arsenal ..since he was 16….he never got enough playing time at all…He has a lot of potential… i’m sure he loved this club …..But all things come to an end …. after all this years with arsenal ..and no play time … He needs to move on and find somewhere he would be given a chance…..People in Mexico ..realized Vela opted out to play for the country ..because , he is about to jump a big hurdle in his life….for his BEST interest….and like an… Read more »

[…] has the shop window of the Euros to help him. Carlos Vela scored 12 times for Real Socieded and is interesting a range of Spanish clubs, while Andrei Arshavin, linked with Fulham, is still enough of a name to command a fee if/when we […]

Vela tell Wenger to Fuck off