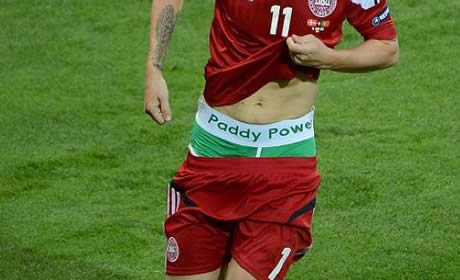 The world of Nicklas Bendtner is a strange and wonderful place. A man whose alcoholic drinks are spiked with alcohol has had some run ins with the authorities in recent times.

There was a speeding fine, he was up in court for allegedly clambering over parked cars with Lee Cattermole (before the charge was dropped), he once crashed his car into a tree on the way to training (probably when chasing a squirrel), and now he’s in trouble with UEFA for wearing advertising laden underpants.

After scoring his second against Portugal yesterday he lifted up his shirt to display the bookie’s logo on his boxers, prompting talk of a UEFA fine. In the tournament regulations, they state, “all kit items worn during the final tournament must be free of any sponsor advertising.”

Of course Nick is no stranger to displaying his jocks to the world when he really shouldn’t, while Paddy Power last night suggested Bendtner’s two goals were brought about not by his footballing ability, but by the lucky pants:

Nevertheless, it’s a timely reminder of the big Dane’s goalscoring ability when Arsenal are trying to move him on this summer. It would appear that the imminent arrival of Olivier Giroud, following that of Lukas Podolski, means Arsene Wenger is remodelling his forward line completely, and both Arsenal and Bendtner know his future lies elsewhere.

Two goals in a high profile tournament will surely prove tempting to some manager, somewhere, and Sunderland’s top scorer last season with a mighty 8 could well find himself with more options than the last close season.

Full disclosure: Paddy Power is an Arseblog and Arseblog News partner and will give you up £50 in a free bet if you sign up with them but will not provide lucky underpants. At least we don’t think so, we’ll ask though.

How can I get one of that lucky boxer? Maybe I can be the next TGSTEL.

Bendtner totally swaped bodies with ronaldo yesterday. He was a different guy.
The goal celebration though was all bendtner.
Haha.

And you people wonder why I don’t associate myself with him anymore.

Why do you arsenal guys like picking on me?! I proved I am the best in denmark and the brief thing was an accident. Jeg er den bedste! Watch me play..

Where did you get that pant?

why make me wear Nick Bendtner, i have standards you know!

His performance should increase his sale value which is the most important thing.
So the 5-2 was the beginning of the end for The Twitcher.Totally overrated manager.With
that squad AW would have easily got them into CL
Bring on the next Spuds victim in AWs reign.

Breaking news: Harry Redknapp has been confirmed to be the first manager in history to have buckled under the pressure of the England job without actually having it.

Breaking breaking news: Redknapp’s reported pay-off from [email protected] is £3m. After tax, that works out as £3m.

I don’t understand taxes, so I don’t pay them.

Got to wonder what goes on in his head……. the bloke is an idiot.

I hope he bangs in a couple more against Germany to increase his transfer value as I wont be sorry to finally get him off the Arsenal books.

Same for Arshavin, although I see the little Russian as a loss of talent to the squad. Just wish he improved each season after his excellent first in the red n white instead of going backwards. (sigh)

Surprising Bendtner looks a decent player in his position. Miles ahead of Cham Park.

Ofcourse the great Arsene could not put a foot wrong so its probably Bendtners fault. and Arshavins.

So Bendtner hasn’t shown anything like the required ability to play for Arsenal and take us forward but now he’s scored in the Euro’s, he would have been the answer to our goal scoring last season? Is that supposed to be a joke?

In fairness I do think he has been decent enough for us, he has got some very important goals and like I said below I imagine he would of had a future with us had he got his mental act together.

If Cygan would read before frothing he would see I suggested he was a better squad player than Chamakh and Park.

Similar to what the Blogger said today, on the blog. Bendtner nowhere near as bad as made out.

You are the joke Mr Cygan.

@Hudson do you even know what a squad player is? Bendtner always whines the crap out of me whenever he plays. Always complaining when he’s played on the wing. Prove yourself if you wanna be a regular at a top club or gtfo.

I actually rated Bendtner quite highly, I think he’s a talented footballer with good technic, considering he’s pretty tall. I thought he could succeed at Arsenal but something in his head is wrong. In my opinion his ego is to big that he’d really fight for his place, work on his weaknesses and accept to be a squad player. So he’s not what we need at Arsenal and should be moved on

Honestly, its rare to see a striker getting in to so many beautiful scoring positions and then slice it wide, power it over the bar or hit it straight at the keeper. Extremely frustrating.

I must of been one of the few people defending Bendtner and his ability over the last few years. With a different mind set he would of been an excellent back up striker but the fact is he is a bell end.

How about we keep Bendtner , sign Giroud, keep VP and get rid of the rest . 4 strikers who can score is better than 1 that can , 1 that can’t and 1 that is nothing more than a mystery !

Lol. Bendtner would never play second fiddle to RVP and/or Giroud. He is TGSTEL, he would demand/command first team action.

Did NB52 know he would score a second?, just curious as to why he did’nt reveal it when he scored his first?
I guess his ego was pretty sure he was gunner do it.

You won this round bendtners ego!.

he thought that draw was good enough to send DK through to the playoff’s so he was high as a kite.

wow … the world’s most greatest underwear is revealed

Chamakh is now keen to get into Bendtner’s lucky pants in a bid to improve his own goalscoring form.

Yup I’m made of steel!

Ibrahimovich is bellend too, but he’s one of the best stikers in the world when his ego is entertained… maybe bendtner might end up actually becoming TGSTEL if he goes somewhere like milan

yeah but ibrah is good at pretty much everything when he feels like trying, bendtner, yeah not so much

Did you give him the pants blogs? You seem to be friendly with ol’ Paddy Power.

You score two goals against Portugal and immediately cancel out any pride you could have in it by acting like a total douchebag!

What a classless idiot. This is why nobody wants you at Arsenal. If he scores one more goal Spuds will try to sign him. 3 more and City might!

And here I was thinking football was supposed to be fun.

So does eating shit. How is it relevant to a man wearing shorts aye?

It’s just a shame for us that Bendtner’s shooting boots have: “Property of the Danish FA, return to Copenhagen after use.” stamped on them.

I scored both with my head so go fuck yourself.

And while you’re at it return my head to Bellheadens and Co. Danish Importers.

But he was super yesterday give that to him, and I must say he is better than Chamakh or Park.

But the manager knows better.

He has definitely had some rum ins with the authorities in recent times.

Am I the only one who would have bendtner stay on our bench? Eh? Its good to have a bit of character around the place and he’s not too awful.

I have to say that associating yourself with a betting company when you are a professional athlete is not exactly smart. In other sports, or countries you risk getting banned or going to jail. Just knocked of the million he had added to his selling price for the 2 goals.

Maybe Paddy Power should wear boxers with Niklaus Bendtner’s name on them he might just score with his wife.