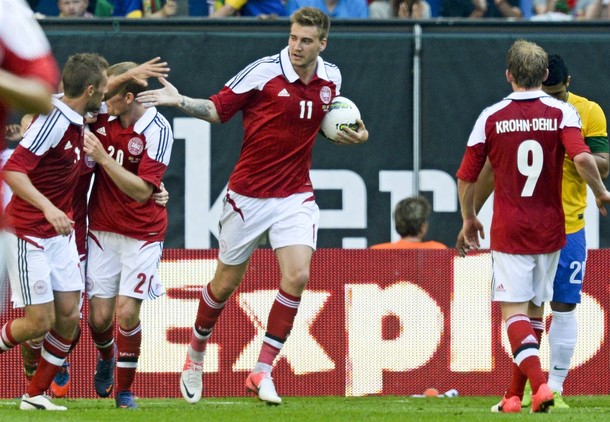 Nicklas Bendtner admits that playing in the Bundesliga is an attractive option after confirming he’s on the lookout for a new league in which to test himself.

Making clear that his focus is on performing well for Denmark at Euro 2012, the big Dane hinted that a move to Germany was a possibility as speculation mounts that reigning champions Borussia Dortmund could make a bid.

“I’ll try something new and can easily see myself in the Bundesliga, but it also applies to several other leagues.

“I am open to most things, but will wait to decide where I will play when the Championship is over,” he continued.

“My whole focus is now on making it good for Denmark at the European Championships.”

Given the number of Arsenal players set to feature in Poland and Ukraine and the fact the boss will likely be on television / sponsorship duty at the tournament, it looks as though the future of not just Bendtner, but several other stars, will be left in limbo for at least another month.

pretty sure during octoberfest they’d welcome a photo of him with his pants around the ankles, plus germany are very strict on no drink spiking so he won’t be subject to that again….

good luck to him, he is ‘the best striker in the world’ so bayern will probs be knocking on arsenes door

His huge wages mean he’ll continue to stay at Arsenal and continue to be a Benefit Scrounger.

Bye bye… pick up your underwear on your way out.

and my shisha pipe, cheers

i am upset that this has been made

You’ll be better than Mario Gomez.. hahaha… now give us back the 52k/week wages.

Haha maybe we should see whether Bayern would do a swap?

Although you’re right, Gomez is one of the most overrated strikers in Europe at the moment.

Good God. I don’t even know where to begin.

Chimaera
Reply to  why is my name required

A. He’s not been that good at Sunderland
B. Has large wages so Arsenal obviously want to sell
C. He’s not exactly in demand

If Podolski cost £11m then i don’t see Bendtner as a £7m player, and neither will a buying team since they hold all the cards. I’m going to guess that we’ll get between £2-4m, unless he does really well at the Euros in which case we could get £5-6m.

NO NICKLAS! You can’t possibly go, what would we ever do without you?!

In all fairness I thought he was pretty talented, but his ego and arrogance always got in the way. If he’d have worked on his finishing he could have been a real star.

Best of luck to him, and I mean that sincerely, but I don’t think we want him around the club any more.

I have no problem if he stays as long as he keeps his mouth shut. This guy knows where the goal is and i would rather have him on the bench rather than Chamakh or Arshavin.

I seem to recall him getting in the way of another player’s finishing before too.

I can easily see a succesful arsenal team with you in germany. So yeah, it works.

Bayern have Gomez and Pizzaro, and are close to signing Luuk de Jong and Dzeko so they’re pretty set up-front. Maybe we can offer Nicklas the Great to Dortmund in a swap for that Lewandowski fella. I would like to have a Pole in hole as well as a Pole in goal at the Arsenal.

…With the problem, of course, that no idiot’s going to sign Bendtner and give away Lewandowski….but a nice deal for us, if done.

Perhaps if there transfer criteria is based on the players ego, then bendtner would surely make the cut.

Didn’t we just get a pole in the hole?

Podolski might be Polish by nationality, but he plays for Germany. Lewandowski plays for Poland. Besides, having two Poles in the hole can only be a good thing 😉

Hi..does anyone still rmb me?

Who are you again?

I’l tell you he is, he’s every other asian guy.

nope, but you sound like a scarey place for kids to visit.

Oh my god I looks so hot in that pic.

Guys srsly look at how cute I look. Hmmpthhhhh!

Sad, really sad you can’t even get your own name right.

The sooner he’s off our books, the better. Auf wiedersein

Tim
Reply to  bc

When you come back to earth we’l talk.

Kops
Reply to  bc

While you’re at it, replace Song with Messi, Park with Ronaldo and Bendtner with Neymar. If you’re gonna dream, at least dream big.

Lotus Flower
Reply to  bc

Replace our funds available with City’s

Rad Carrot
Reply to  bc

Quick and dirty approximation of how much we’d have to spend to land those players: £120 million.

Quick and dirty approximation of how much how wage budget would increase: 200k per week (£8 million season).

Quick and dirty approximation of how much we’d make from all those players: £30 million.

Look how well it turned out for Liverp…….oh!

Replace your pc with a calculator you cock

I wish he’d just fucking do one, I’m sick of reading about the cunt!

Some just take this cretin off our hands PLEASE!

‘Maybe someone will want you Nick, but I doubt it. You’ll probably just end up on the same footballing scrap heap as Bentley, Gallas and Adebayor.

Looking back on the last two years or so I am sad to say that it looks like Arsenal was carrying around too many knobs. Imagine having to get up in the morning and having to go deal with Adebayor, Nasri and Bendtner. Glad to see the back of all these clowns.

With how he’s been behaving, let’s sell him to that anzhi machakalalalalala team way out in bfe Russia with all the petrol money. Surely they need more players, and their inflated self image matches big nick’s

Let Nik try to sell himself as he is his biggest fan. I am sure that if we were able to sell him for what he thinks he is worth then we would be able to pay off the stadium and buy the olympic stadium as well for the youth team.

Yup i was never appreciated, now watch the tears roll as i set the Bundesliga on fire!

If anyone wants a laugh, check out Bendnter’s miss when clean through, round about 68 minutes into the Denmark v Australia friendly. Comes complete with the vacant gormless stare and slack – jawed gum chewing we know and love. Cheers Nick!

I don’t understand this at all. Surely Anzhi Makajawbreaker are going to offer a bazillion pounds for TGSTEL and he’ll be off to the Russian league?