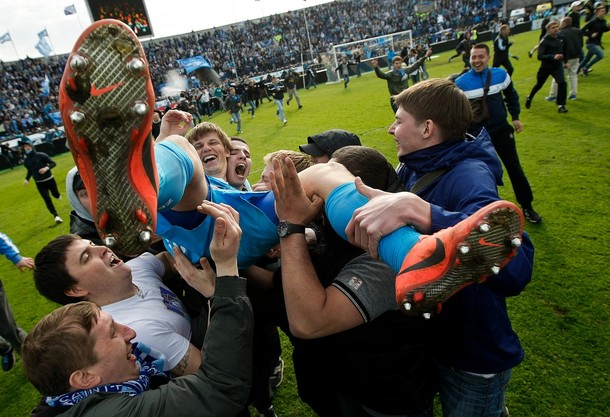 Zenit St Petersburg have confirmed they are ready to talk to Arsenal about a permanent deal for Andrei Arshavin, but insist the midfielder will only be signed for football reasons not because of his history with the club.

Taking a swipe at the way Arshavin has been dealt with by the Arsenal coaching staff, Zenit CEO Maxim Mitrofanov told Izvestia:

“We took Andrei on loan, and we believe that we’ve shown Arsenal how to deal with players as they train.

“Now everything depends on Arshavin. If Andrei is ready to stay in the team and go on the field as a player, we are ready to discuss it.

“Arshavin is part of our club, but with all due respect to him, he’ll only stay in the event that he proves himself useful as an active player, not as a man making up the numbers.”

Having returned to St Petersburg in February, Arshavin scored three goals in ten appearances as Zenit wrapped up the Russian title.

While it has been widely reported that the Russian benefitted from regular football, showing flashes of his enigmatic brilliant, Mitrofanov (seemingly echoing the noises coming from the Emirates) is obviously expecting more from his country’s most high profile sportsman.

Arseblog News fully expects Arshavin to sign for Zenit, although whether Gazidis and Wenger can squeeze a better price  for him this summer (assuming nothing was put in paper in January) will largely depend on the player’s performances at Euro 2012.

In other news, it was reported yesterday by the BBC that Mikel Arteta could get himself a pay rise after a successful first season at the Emirates.

While the Twittersphere got its knickers in a twist about a player asking for more money, you can’t help but think this was something agreed to by the Arsenal hierarchy on deadline day last August as the club rushed through the Spaniard’s signing.

Given the haphazard nature we went about our business, it’s fairly easy to assume that a few corners were cut (and that agents pushed through certain details for review) as the clock ticked down. You only have to look at the complete confusion over Ju Young Park’s military service for further evidence of the madcap way we threw cash around.

UPDATE – We’ve removed the line about his contract being more lucrative at Arsenal than Everton…Cheers.

Fingers crossed something can be worked out, whether he stays with us and works really hard, or signs for Zenit, because like him or not, he is a brilliant footballer on his day. He deserves regular football.

Flog him. Get him off the payroll.

Brilliant when he arrived, now sporadic and as effectual as Denilson was before going on loan. No longer a serious first team challenger and not worth a place in the squad.

Seriously, winning a title back home certainly must have lifted his spirits. If he’s got back his confidence, he can be a good “addition” to our team. We all know he does have the quality.

Doll head, action figure body, baby arms for legs. I love andrei arshavin and then some. You can take him yes!, but i’l be one sad gunner.

Arteta’s contract at Everton ran until 2015 (which is the same length that we offered him), so it wasn’t more lucrative than his deal at Goodison. (source: http://www.guardian.co.uk/football/2010/aug/07/everton-mikel-arteta-new-contract)

ofcourse we shouldn’t have a problem, we’re not the ones paying him!!

Umm.. don’t we as “fans” buy tickets, shirts, food, drinks etc when we watch the Arsenal? Doesn’t that contribute to the revenue, which in turn pays our players?

I could have sworn, that was vaguely how it worked!

Arteta had signed a 5 year deal with Everton, so his existing deal was as long as the one he signed with us. We dont know the details of the pay structure of that deal, but the fact that he was on more before he signed with us suggests he would have earnt more by staying with the Toffees than by moving to us

me want move, me love vodka and not running much

The_Voice_Of_Reason
Reply to  A. Arshavin

My 5 year old knows better jokes then this, can people please only pretend to be players on here if it’s funny. not every post just to get thumbs up

THEREISBEARCUM
Reply to  A. Arshavin

Getting bored now. Bring on the new fixture list.

It says something about the club that we couldnt even match what Everton were paying Arteta and Everton are famous for being broke!

Any hope i had of RVP staying is slowly fading.

And Arsh should come back, all is forgiven.

Arshavin come back – brilliant next you will be forgiving Denilson and squallachi (in fact the latter might be a shit player, but his attitude is better). Jettision all three.

ive gone past blaming individual players for our misfortunes!
Denilson wasnt around this season, Squillachi didnt really feature but we still didnt win anything.

Considering we still have players like Park & Chamakh in our squad, I’ll take Arshavin over both any day of the week, don’t forget we’ve actually used Arsh as a lone forward a couple of seasosn ago and he scored more than those 2 combined.

If the Arsh could have played in the hole behind RVP, I think we would have seen a VERY different player – one who was effective and motivated to play. Instead, AW bought him as a hole sitter and played him out on the left of an attacking 3 where 1) more running / defensive cover was required, and 2) he wasn’t going to be as creative thus bagging less goals. I don’t feel sorry for the imp, but I do think he has been asked to play in a position that doesn’t suit him at all. Either way, £8m… Read more »

I kinda like Arshavin, but I don’t he is strong enough to work on the center of the park for the Premiership.

The brutish center backs and def midfielders will dispossess him repeatedly.

He could probably work in a withdrawn forward capacity in a league with lesser standards for defenders.

I suppose we could have played him more central, but he has pissed me off with his complete lack of application, so fuck him.

Also, pay Arteta what he wants.

So if we loan out squillaci for 3 months and he has absolute blinder do we all want him back?
i like arshavin but if the boss only thinks he can play left wing and lets face it he cannot then what is the point of him staying.

So the suggestion is that we allow our players to become lazy right? As devil’s advocate I would suggest that whether they go for money or not, and whether we like them or not, there are two types of player that leave Arsenal. The ones who want to be the best (Fabregas, Henry, Cole) and work hard to get there when they leave us, and then there are the ones who have grown comfortable with the easy life at Arsenal and fail at their new clubs through lack of application, or at best receive a rude awakening when they have… Read more »

Arteta proves my point, as does RVP. They worked so hard last season in every match, for the whole 90 minutes, and we’d have been (and were) screwed without either of them.

Goodness. I don’t do a lot of criticising of Arsenal, but I felt that just needed saying. I am a believe in Arsene though, and I do believe that he just needs one more dynamic hard working coach to instil a better work ethic into the team and Arsenal will BE THERE.