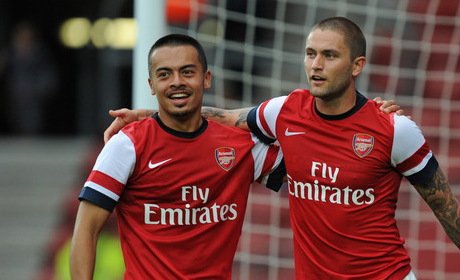 For the majority of Arsenal’s young professionals the past couple of weeks have proven to be rather enjoyable as they spent time in and around the first-team set-up, with several even forming part of the senior squad for the Markus Liebherr Memorial Cup hosted by Southampton last weekend.

For many, though, it will be back to the day job tomorrow when an Arsenal XI travel to the more humble surroundings of Boreham Wood’s Meadow Park for their opening pre-season friendly in what will be new coach Terry Burton’s first game in charge since he returned to the set-up.

There will be some notable absentees, however, with Benik Afobe, Chuks Aneke, Henri Lansbury, Ignasi Miquel, Nico Yennaris and Craig Eastmond left out of the squad for the now traditional encounter with the Blue Square Bet South side. Some, if not all of those players are likely to be part of the first-team squad that travels to the Far East this weekend for a three-stop tour of Asia that includes a game against Manchester City.

For some, Aneke, Lansbury and Eastmond in particular, their chances of going on the tour can be seen to have benefitted greatly from their performances in the aforementioned pre-season competition on the South Coast. Lansbury scored the only goal of the game against Anderlecht by latching onto Carl Jenkinson’s cross, Aneke showed some diligent touches prior to succumbing to injury and Eastmond was the only player to start both fixtures against the Belgian side and the hosts.

The tournament was also notable for maiden first-team call-ups for some of the younger members of the Reserve squad. Promising Swedish midfielder Kris Olsson, who is extremely comfortable in possession, has not yet featured for the second-string let alone trained with the senior squad, yet acquitted himself well in unfamiliar surroundings, whilst Kyle Ebecilio, usually a midfielder, filled in at right-back for a period in the second game.

With regards to the squad that will take on Boreham Wood, goalkeeper Damian Martinez will be present and, if truth be told, probably a little disappointed that he won’t be heading to Asia, whilst the inclusion of Sanchez Watt in the Reserve squad will surely ring as a death knell for the 21 year old’s Arsenal career.

Midfielder Conor Henderson is also included, but for a different reason as he seeks to build up his fitness having missed almost the entirety of last season through injury, whilst there is a first call-up at this level for new scholar Chuba Akpom, an exciting England youth international who can play in a variety of attacking positions and possesses a skill-set not commonly seen among home-grown youngsters.

Meanwhile, the under-18s travel to Cobham to take on their Chelsea counterparts today in their first friendly, with the side likely to be comprised mainly of the new intake of scholars. Schoolboy Jordan Brown, another England youth international with an impressive scoring record, could make his debut against the Blues.

A man in a movie theater notices what looks like a turtle sitting next to him.
“Are you a turtle?” asked the man,surprised.
“Yes.”
“What are you doing at the movies?”
The turtle replied, “Well, I liked the
book.”

OK, who are the sourpusses giving turtle jokes a thumb-down?

Carl jenkinson has been and will continue being a success imo. There’s no slowing that kid down.
Love arsenal, love our youth project.

Great engine, great crossing ability. The future looks promising for him. Just needs to sort out that bonnet.

Hear hear. Finally good to see someone not speaking ill of the boy. His crosses are superb, we just haven’t had the type of players who’d attack those sorts of crosses playing with him. I daresay, Chamakh would’ve loved playing with Jenkinson…

Agreed. And a Gooner through and through…Love this youth project and the genuine love, admiration, and hopefully future loyalty of these lads.

I’m actually delighted that Lansbury is going I think the boy is class. I don’t know what it is about him but it seems managers overlook him after he’s played a good game. For instance 2 seasons ago when we beat tottenham away in the league cup Lansbury pretty much controlled the game from the middle and then next min he was sent out on loan. I hope he’s kept around for this season. I reckon he’s going to grow into a very good English Arsenal player

he looks a bit thin for an English player

Santos has been stealing his lunches.

I know where you’re coming from but there’s no need to exaggerate.
Lansbury did not control the midfield against Spurs, rather it was Wilshere & Rosicky and a certain chinless cunt.

But the fact he signed a contract extension last season, showed there was still some faith that he’ll make it at the club and hopefully he delivers this season.

ETID
Reply to  Curiosity killed itself!

He might not have controlled it but he won the man of the match award.

the Arsenal youth setup is the best in the world.imo if these guys are shown the right way starting from having mental strength then the future looks bright. are they not ambitious enough lord van pizza?

Hopefully we’ll see some youngsters break through this season!

Wenger highly rates kyle ebecillo, kris olsson and thomas eisfeld. So I too will rate them highly…… Yeah I know, i’m a genius.
On to the next one!!.

Let them get their chances and show the world. Local players show more loyality in any team any league we need a few more at Arsenal

Simba ! what are you doing talking to humans ,Where’s Zazu ?

Some ds Arsenal shap should be given chance to play, they are not bad.

Do us a favour!. Lay off the net, get some grammar lessons. Thankyou.

*shakes head and continues with rest of me day.

Curiosity killed itself!
Reply to  BrianTheBelfastGooner

same here, but inst he just recovering from an injury??

Great we’re all developing these young players and give them a chance! T hose are good players but, unfortunately, at the moment, I don’t see any Cesc or Wilshere calibre among them to make a real difference at Arsenal.

Anyone know what’s going on with wellington silva?

Still getting high on pizza’s?

shame he’s earned this unprofessional reputation, he seems a player with lots on promise

What exactly is happening with Ryo lately then. Any goss?

I may take the 15 minute walk from my house to see Arsenal take on the mighty Borehamwood!

I’m gonna be there. Last year’s game was a pretty entertaining way to spend an afternoon. And their burgers are great!

Yeah Borehamwood are pretty world renowned for their tasty burgers!