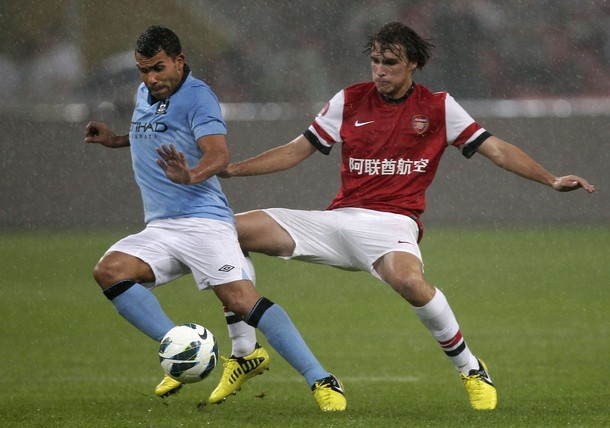 Conor Henderson and Ignasi Miquel are both eager to consolidate their Arsenal credentials this season with the former open to furthering his football education on loan and the latter focused on getting fit and discussing his options at the end of the transfer window.

This time last year Irish winger Henderson was enjoying a fine pre-season with the Gunners first team squad before a cruciate knee ligament injury ruled him out for nine months.

Now back to full fitness, and in fine form judging by his two goal salvo against Bolton in first fixture of the new under-21 league, the 20-year-old says he is happy to follow in the footsteps of Benik Afobe and Ryo Miyaichi by testing himself on loan.

“It is important for me to get games this season,” he told Arsenal.com.

“I think the plan for me now is to go out on loan, get some first-team experience and see where I go from there.

“A few clubs are asking about me but I think they want to see I am match fit before they take me, so hopefully I can have a few more games for the under-21s and do that.”

Indeed, given his proximity to Arsene Wenger’s starting line-up it appears the young Spaniard is willing to wait before discussing any such loan move of his own.

“Right now, I just aim to make sure I am fit and ready,” said Miquel. “Then I’ll have to wait. I haven’t really thought about anything else – first of all I want to see how all the players are, who comes and goes, and then we’ll see what happens.

“We start from the beginning now and I really want to do well this season – working hard until I’m an Arsenal first-team player.”

There were rumors about us giving Miquel on loan to Malaga, no? Would be good experience for him, but I don’t want him within sniffing distance of Barcelona.

No. Miquel needs English footie, not the tippy-tappy spanish shit.

Send him to Stoke ..

maybe then they will understand that there is no need to play Neanderthal football all the time .. and that you can be a defender and be graceful and technical at the same time ..

Miquel would man-up watching Pulis joining their lads in the shower, and Stoke will see the light of modern football ..

I thought he was supposed to be going to Brighton – what happened to that?

His agent, the reisbearcum was unavailable for further comment. We’ll have to wait for further developments.

I know this isn’t relevant to the article, but The Independent are saying Sahin has passed his medical with us and is to be announced in the next 24 hours, whilst the Evening Standard are saying he’s now talking to Liverpool.
Are there more than one of this guy or something?

He obviously signs for both teams.

he is gaining some prem league experience!jus sahin

6 months for us then 6 months for litterpool. Win us the f.a cup and takes us to the top of the table then embark to litterpool in their europa league struggles as cazorla and co finish the business for us in the champions league. Works just fine!.

If Sahin could win us the FA Cup in 6 months i.e. in February he will become the greatest player in Arsenal history. Seeing as the final is in May.

Obviously we’re still at the “Make whatever shit up you like, no-one can confirm it either way” stage of proceedings

i think we are pretty well covered for the 3 in the middle.

We need another option up front.

Loaning Ignasi would actually makes sense, if Arsene is indeed on the market for another defender with the same charasteristics (ie a centre/left back).

Join the dark side…

This is the perfect example of a cunt.

What's my name?
Reply to  Truth

Truth
Reply to  What's my name?

I know this is AW blog, but i dont support AW i support AFC, you are all some stupid ass niggaz……..9mmm semi auto pis

9 micro-millimetres? That gun will do fuck all, unless you’re an ant.
Which leads to my next question:
Are you an ant?

The truth is, you are a troll and a cunt rolled into one. Does it hurt?

Does anyone else have this image that Truth is a spoilt 14 yr old middle class kid who has anger issues since his parents split up…….or is he simply a twat?

AW Sell the club two best players and kissing Madrid ass over a loan signing. Stupid ass Nigga, where is the cash from vp and song sale, this is going to be your last year AW, starting at stoke on Saturday…

1st of all, Arsene is not black, neither is he stupid
And if he was black, calling him the ‘N’ word would racist.

Actually your comment will probably be removed anyway, so mine will look completely random.

this is what happens when someone posts after watching the wire boxset .

i ll bet he has far more qualification that you wil ever have,more intelligent you will ever be and more white that you think you are

I henderson loaning him.

@Oberon i know why u refer to me as a cunt, because you are Arsene W panty shield fucking gay

Lay off the hooch son, you obviously can’t handle it, poor love.

I am assuming (and hoping) Truth will now be banned?

Giving the truth tumbs up or down, ban or whatever, it still remain the truth. Stoke on Sunday….its going to be a long trophyless don’t fool yourself… top 10

Kid, give mummy his phone back, get out of the house alittle more often, make friends……..with your cuntiness though I doubt you will. Good luck though, you ninny!

Real Gooner, give you all something to rant about, i see you can all keyboard warriors…lol…the truth is just playing…gooner for life…you all enjoy your day…hoping to see Sahin later…….COYG

Who let this guy out of the crazy house?
For someone who clearly thinks he is right about everything his vocabulary and sentence construction is, quite simply, fucking awful.

that Truth fella wont be around for long, shcool hols are almost over

Not sure they have schools “in da hood”

they have school burned down in the last riot

the only one troll

I think there have been enough times Miquel has come on instead of Squillaci (who was available) to be able to label him as our 5th-choice w/ or w/o Squillaci.

Sorry for the delay in sorting out the troll. It’s done now but I guess you could say we couldn’t handle the Truth.

I couldn’t handle his illiteracy!

Sp*rs fan trying to find a way to drown his sorrow.

When will Lansbury Watt and Eastmond be sold / released?

Yes they both have no chance of ever getting into this team, they better leave!. Lansbury opening the door, craig following closely behind. Wenger waves goodbye!

Truth is a fucking spud. And he just can’t handle that truth

Şahin Signs For Liverpool; Commence To Freaking Out If It Is Your Wont « The Tasty Nuggetz

[…] Conor Henderson, recently returned from injury & Ignasi Miquel are likely set for loan deals to get some first team experience, likely in the Championship or even League One level.  Miquel […]