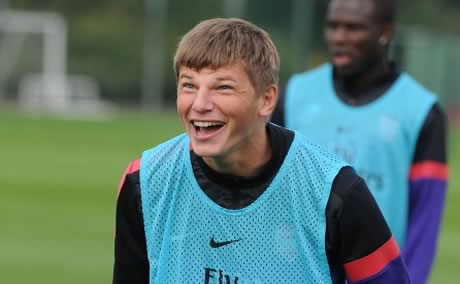 Andrei Arshavin will start his first game for Arsenal in over eight months tonight as the Gunners face Coventry in the Capital One Cup.

The Russian last started on Jan 15th in the 3-2 defeat away at Swansea in the Premier League, and not long afterwards spent the remainder of the season on loan at his old club Zenit St Petersburg.

Arshavin has played just a few minutes of football this campaign and has failed to make the last two match day squads, however, Arsene Wenger says his absence from the squad is due to its strength and that the owly one is fully committed and working hard.

Speaking to Arsenal Player, the boss said, “I have personally a great respect for Andrey Arshavin because sometimes some wrong ideas are circulated about him – that he doesn’t care, but it’s completely the opposite. He’s a 200 per cent professional who works very hard in training every day.”

“At the moment he’s a victim of the high level of competition that exists for places. He has a huge respect from everybody in the dressing room, and especially from the staff.

“I feel he’s unhappy that he doesn’t play because deeply he loves football and he practices every day with 100 per cent commitment. I’m happy to give him some competition on Wednesday night.”

Arseblog News knows that Arsenal were willing to let Arshavin go on a free transfer this summer, with interest from a number of Russian clubs, but he wanted to remain in London.

Tonight is a chance for him to show that the player we paid £13m for is still capable of producing something, and with a long season ahead, can contribute to our trophy pushes.

Wenger also spoke about the opportunity for Andre Santos with the Brazilian set to make his first start of this campaign, and the manager suggested patience will be a virtue for him and others slightly on the fringes because of the team’s good form.

“I keep confidence in Andre Santos. At the moment Gibbs is doing well, the whole defence overall has done well since the start of the season so we don’t have much chance to change. But it will come because we have so many games if we do well in all the competition, that’s absolutely natural.

“Nobody can play all the games anyway.”

With Capital One replacing Carling, the two domestic cup competitions now read FAC UP and COC UP! 🙂

Shut the fac up coventry the coc is up!

What are the odds of Arsene playing the cuddly maverick as a CF tonight just to piss off Walcott’s “people”?

Santos up front and walcott on the bench that would be so funny and childish. I do hope we can sort things out for him as well as us so he stays.

Theo does offer us something different

I asked Mr. Wenger when would I play as a CF. He said ‘The day a monkey comes out of my butt.’
And I wished I were Bruce ‘ Theo’ Almighty

I for one thought If you were bruce theo almighty you would bless yourself with talent and skill then ofcourse add a few zeros on that cheque.

Where your priorities at theo?

I’m a striker. I don’t care if Andrei plays on the wings. It is about time I played up front

There’s a queue here, get to the back.

Yeah get in line 😛

I’ve decided to come out of retirement. Having already spoken to Arsene, I can tell you that he said I’d start in front of you Theo this season.

Oi! First choice strikers not going to play? This is MY chance to shine, pal!

Is that photo the reaction from Arshavin when he was told he was playing.

If Arsecast taught us anything it’s that it would go like :
“Arshavin? Start…behind err… striker?” shut up Eboue.

I hear his Arsecast voice very time I see him now.

AT HOME WITH EBOUEEE! Definitely my favourite feature.

Anyone know which arsecast this was to relive

The ‘shut up Eboue’ arsecast skit was pure class. I implore our host to link it.

Arshavin……such an obvious talent….I’m so puzzled as to what the hell happened there. If he’d carried on the way he started he could have easily become an icon.

And so would chamakh.
No, not him!. Arshavin is cuddly easy on the eye, chamakh is well cham-aargh!!

The type, speed, accuracy and timing of passes that Cazorla pings around seemingly effortlessly on matchdays makes me feel that Arshavin doesn’t have a chance in that playmaker position.
We know Arshavin can beat players very well, but he has a chance to really give the boss a headache when selecting the first team squad. I hope he starts playing well and forces his way in the team like how Rosicky ripped it up last season.

Somehow you have to love Arshavin, he seems like the most likable person in the whole premier league 🙂
I was sure that he’d leave in summer, but it’s such a refreshing contrast to all the footballers who think they are to big for the club that he stays here and fights for his place. Let’s hope he gets his career back on track, stating today.

Arsene always protects and respects his players and rightly so, but as a fan I just don’t see arshavin giving 100% on the pitch. For whatever reason it just hasn’t worked for either party and it’s a shame that we can’t move him on due to his wages and or attitude.
Could be a world beater in the right team, he has the talent.

Please Arshavin, bring your A game tonight!
& stay at Arsenal!

Arshavin is still quality (mind u, I do wonder abt my own opinion these days, I still haven’t given up on Chamakh!) it’s just that football moved on whilst he been with us, we don’t play to his strenghts. Hope he does well tonight. We all like him coz he’s aways smiling!

Im annoyed at Arshavin. How can a player I like so so much end up like this. It makes me sad.

Arsenal my love:) Supporting the boys since I have been watching soccer for 15 years…

Am I reading too much into Arsene saying he’s 200% professional and only 100% committed in training ergo should be trying twice as hard in training?! Love the guy – 4 goals against Liverpool will always have a space in my heart. Hope he can contribute something for us this season.

Apart from the 4 he smashed against pool, do u remember the one he counted into the top corner at old trafford? One of my favourite ever goals! I really like arshavin. Never moaned or slagged off arsenal, in fact, he’s refershingly gracious enough to admit that his patchy form is the reason he’s not a regular, (take heed of this self-awareness theo) I really wish he could find his mojo on the pitch again he hasn’t looked happy for quite a while now, poor chap.

Don’t tell me your’e trying to sideline me! Are you nuts?

Why’s Theo making such fuss about a central role?