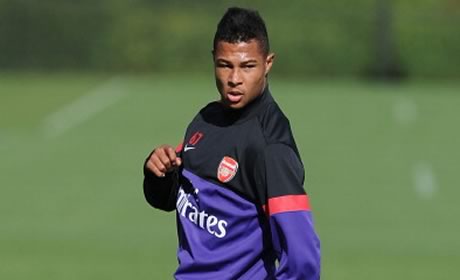 With the Capital One Cup upon us, Arsenal fans are hoping to see some of the next generation in action against Coventry tonight.

The competition that has provided the starting point for the likes of Cesc Fabregas and Theo Walcott in the past allows Gooners to get glimpses of players they normally wouldn’t see in first team action.

One youngster, in particular, looks to be very much in the manager’s thoughts and that’s Serge Gnabry. The young German is very highly thought of by the Arsenal coaching staff and Arsene Wenger says his potential is such that he could make a first team impact this season.

“Serge Gnabry is a great hope for the future, I rate him highly,” he said in his pre-game interview with Arsenal Player. “If he continues his development, I think he could play in the first team this season. At the moment he needs to work and ensure he remains fit.

“He is in the category of Oxlade-Chamberlain and Walcott – guys who have great power, great pace and good dribbling skills. He has goalscoring potential and good vision as well for the final ball. He can play centrally behind the striker or on the flanks.”

The comparisons with Walcott and Oxlade-Chamberlain, who were fast-tracked into the first team squad at an early age, are very interesting, suggesting that Wenger is looking at using Gnabry in a similar way. A good performance tonight would cement the boss’s thought process.

He also spoke about some of the other youngsters who could be involved, citing Kriss Olsson, young Spaniard Hector Bellerin amd even the not that young any more Craig Eastmond. There was susprisingly no mention of Gnabry’s compatriot, Thomas Eisfeld, but he could be on the bench tonight too.

You sir are a prat.

I find you highly negative and prickish.

The comments about him being a similar player to Walcott seemed like a veiled warning to Theo. Sign now or we already have your replacement waiting in the wings ready for first team action.

Theo really doesen´t affect me that much. He´s been promising now for 6 years and is yet to make a consisting impact on the first team. The Ox has played for one season and has shown a lot more and now this fellow is coming along.

I know that THeo only is 23, but I really can´t see him becoming a world class fotballer with Arsenal. I like hom staying for us (mainly for marketing purposes, since he´s a major celebrity), but really would not care if he left.

Theo needs to appreciate that there are young guys coming through that would happily take his place, and on a fraction of the wages.

And we still have ryo

From Per – Poldy – Eisfeld and now – Gnabry the germans are great n healthy! keep it up guyz n make us proud!

Maybe goetze next year.
Sorry but want that to happen one day.

We need more Germans in the squad! The German youth ranks are overflowing with high quality players. We definitely should look at Germany’s young defenders.
If Theo refuses to re-sign I say we take the money we’ve got and immediately go after Marco Reus!!!

The same Reus who just signed for Dortmund?

The very same yes, just because he’s playing for Dortmund doesn’t mean we couldn’t go after him.

I just hope any of these youngsters pull a cashley on us. I hope they are all true gunners like titi was.

AW was excited by mark randall, kyle bartley, henri lansbury, thomas cruise etc in the past didnt he?

Name the last coach who called his youth players shit?

I don’t care if this is an Arsenal forum, I can’t live this lie anymore: I fucking love Harry Redknapp.

Bring in these young and good skilled players, I still insist that Diaby is not as good as Mr. Wenger thinks about him. He is the boss anyway.

*Looks at picture* Giroud definitely needs to start tonight, If only to restore a certain level of good looks in the team tonight.

I thought we would all call it the Credit Card Cup! Never mind.

The Financial Crisis cup.
Ironic that City are already out of the banker’s cup.

I agree Diaby had 1 good game against Liverpool and thats it. . If Ramsey maintains what he did against city and Wilshire on the verge of return + Rosicky . . Diaby has no place on the bench . If he aint consistent

Fingers crossed his attitude is “exciting” too, aka not a la Bentley/JET.

Shame Eisfeld wasn’t mentioned along with the other youngsters. Hopefully he still gets a shout tonight

I’ll get my coat…

Bloody hell, theres a lot of happy shiny people commenting on the blog today aren’t there?

Must be the rainy weather!

I am a little confused as to why Eisfeld isn’t in the running tonight, I thought he was a major upcoming talent too. But le Boss knows best. Would like to see him at some point this season though. Definitely looking forward to seeing more of Gnabry, I’ve only seem him play in snippets and highlights, but looks confident on the ball. If Wenger is happy to play him in our packed midfield, he must have some talent. Didn’t think Eastmond would be playing though, some papers are reporting he’s gone on loan to Colchester. Ad for Giroud, I’ve love… Read more »

Take it you’re not a regular Countdown viewer then Red?

Ah! Of course! Thanks.

Took me a while too mate. Imagine if it catches on…

That would be amazing.

I’m looking forward to seeing Gnabry, Eisfeld, Akpom, Bellerin, Toral & Boateng. I’d also like to see more of Miquel to see how Bould has influenced his play since we last saw him.

I think we need to give Giroud some time in these games to get his confidence up and maybe JW#10 when he’s fit again to ease him back into it.

Has it not been called that before?!