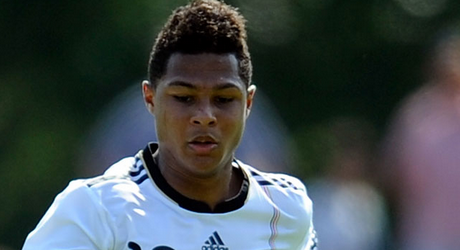 Such are the greater options available to Arsene Wenger this season in terms of numbers, there were fewer youngsters on show than usual as Arsenal commenced their Capital One Cup campaign with a comprehensive 6-1 victory over Coventry City on Wednesday night.

The Frenchman did hand out three debuts, though, with Argentinian Damian Martinez impressing in goal, Martin Angha struggling a little at right-back and Serge Gnabry catching the eye as a late substitute.

It is the young German who has generated the most excitement among followers of the Arsenal youth system in the past 12 months or so, and, having been off-colour in the friendly against Cologne, he seemed instantly at ease in a first-team environment here, making a couple of dangerous runs down the left flank.

Before the game, Wenger stated his belief that, should the 17 year old continue his development apace, he could find himself playing Premier League football by the end of the campaign. Such a notion may seem fanciful to some but, whilst there have admittedly been some games during his brief Arsenal career where Gnabry has been rather anonymous, on most occasions he has excelled, displaying his superb close-control skills and a penchant for delivering swift, direct attacks on goal.

It is not often that Wenger, despite his reputation for developing youngsters, provides playing opportunities in the top flight for 17-year-olds. Jack Wilshere only featured briefly at that level when he was that age, whilst Cesc Fabregas slotted into central-midfield with ease. Gnabry, though, will be hopeful of making a quick breakthrough, even if it seems somewhat difficult to envisage exactly where senior minutes would come from at present.

From one youngster with designs on the first-team squad to two more who, it seems, will not make the breakthrough. Craig Eastmond and Sanchez Watt, who possess 13 senior outings for the club between them, have both joined Colchester United on a three-month loan deal, which will, in all likelihood, be their final temporary transfers before departing next summer.

Both players see their contracts expire at the end of the season and Eastmond is already considered a senior player in Premier League terms, with Watt to be added to that category next season. They have both amassed considerable experience out on loan already, with Eastmond spending time with Milwall and Wycombe Wanderers, whilst Watt has been out on temporary transfer on no fewer than five occasions, most recently struggling to command a starting spot at Crawley Town.

Two members of the FA Youth Cup and Premier Academy League double-winning side of four seasons ago, this latest loan is seemingly the death knell as far as their respective Arsenal careers are concerned. Eastmond is a much better player than many give him credit for, having greatly increased his tactical awareness during his time with Wycombe, whilst Watt’s irrepressible work ethic is endearing, but, it seems, their long associations with the club will soon be coming to an end.

Wenger: Gnabry is more of a walcott type player, they almost have the same attributes.
Walcott: *shivers*. Bring me that pen.

(The pen is brought and out of nowhere the Ox takes it and signs)
Wenger: nods in agreement.
Walcott: *waits anxiously*

Meanwhile, terry is still a cunt.

In all fairness, if we get three players out of that list that make a career at Arsenal, we’ll be doing extremely well.

Agreed. Eisfeld, Gnabry, and Martinez seem the most likely at this point

Gnabry seems the player next among the youth to make the step up. Next year could be Olsson turn if he keeps improving. Very cultured player. Our youth team seems to be stacked with talent and don’t forget Chuba Akpom as well. He has been accelerated into the U21s as well. Competition from the Senior squad all the way to the youth level seems tough. In fairness, I think martinez will have tough time cracking the first team with all the club keepers very young and all on par with each other. To add on the theme of Germans we… Read more »

Are we all forgetting Ryo just because he’s on loan up north this season?

Would have thought he’d be ahead of Gnabry at least.

Shame about craig eastmond, I liked him the couple of times I saw him, but well behind Coq and Frimpong. Hope he makes it to a decent Championship or Prem team.

In the end, Eastmond just wasn’t good enough to compete with all those players ahead of him in the pecking order, and he’s not getting any younger.

I have the highest hopes for our two young German Gunners! I think Gnabry and Eisfeld both have exactly what it takes to make it into the first team at Arsenal and I hope to see them more in the near future.

Hopefully having 2 experienced German internationals in the BFG and Podolski will help them along as well.

Stumbled on this today… Arteta is truly brilliant.

On the subject of fantastic videos featuring Arsenal players, every fan should check out this interview with a club legend.

He was 28 when he signed for the club, and went on to be a then-record goal-scorer. Are you kidding me? amazing commitment!

His co-driver should NOT be fucking jermaine pennant under any circumstances!

He’ll get some playing time once we secure the title. No problem.

Off topic again. if we lose walcott and arshavin in january then gervinho and chamakh to acon we will be left pretty empty up top. even if theo and arsh stay we might need thierry again!

With Gervinho playing for Cote d’Ivoire this winter, Walcott might get his chance at striker in the new year.

Yeah make the euros, copa america stupud too while you’re at it. You piece of shit!. Don’t know why you overlook whats happening much closer at home.

A first-team Serge Gnabry would be much better than a first-team surge in knobbery.