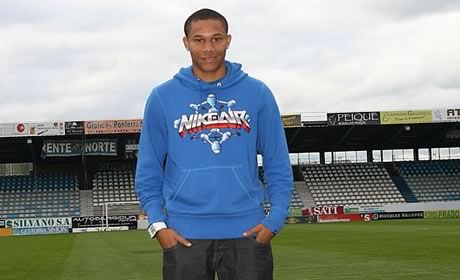 Wellington Silva has revealed that Arsenal are keeping a close eye on him during his loan spell at Spanish second division club, SD Ponferradina.

After difficult spells with Levante and Alcoyano, the youngster is finding it tough going again and has only made three substitute appearances this season for his new club.

However, he says he’s patient and will wait for his chance, while revealing Arsenal have scouts in place to report back on his progress.

“I have to wait because the team is playing very well,” he told AS ,”but I’m here to help. I want to play, like everyone else, but I am calm and have been working hard from day one to have a chance. Who plays is the coach’s decision.”

When asked if he had contact with Arsenal, he said, “Every week. In addition, the club has scouts concerned with my workouts or if I’m missing something.”

At the moment he’s missing playing time more than anything else but the Brazilian is hoping his versatility up front will change that.

“I’m a striker,” he said, “but I like to play on the left. I’m ready to go where the coach wants. I’m not very big, but with the ball at my feet I can do many things and that’s the best attribute I have.”

There’s still plenty of time left this season, but unless he starts making a serious impact, Wellington could well be given the boot by Arsenal.

Will well do well?, well I hope so.

Oh well, i hope there’s a silva ligning to all his loan spells.

Guys got skills from what I’ve seen and heard, and given Wenger’s comments on missing out on Ronaldinho and another Brazilian who I can’t remember due to work permit issues, I’d say he’s going to at least get a shot at first team action if he shows a decent enough attitude…although he has Campbell ahead of him in the ‘South American wonderkid waiting for a permit’ stakes imo.

If it’s below USA it’s South America to me.

Maybe not geographically but screw geography, it never does anything for me

Most naturally talented ‘prospect’ i’ve ever seen on the books at Arsenal.

Hope he ditches those pizzas and we get that work permit.

I’m proud to say John Terry is a CUNT once more.a boot to his face by Diaby next game will be appreciated by his family

My favourite arsenal prospect, I’ve been so impressed with his talent and I hope that he gets a regular first team place in the near future and becomes an arsenal legend along with Joel, the ox and wilshere

Everytime I see an article about Wellington I always post the same thing. Here it goes again, in a different rendition:

Give the boy a fucking visa you fucking fat immigration officer idiot and pig.
Bah! Babylon.

I read that his work ethic and falling out with his coached ruined his time in Spain in his first, but from this snippet it sounds like he’s trying harder now. He’s pretty talented from what I’ve read elsewhere, but there are a number of talented youngsters in and around the club; Eisfeld, Miyachi, Campbell and Gnarby. Two of which have played full season in top flight in European football.

If it doesn’t work for him at Ponferradina – the club needs to use their links at club where he can be assured of match time, or let him go.

Here he is, playing in Brazil a few years ago Bob: http://www.youtube.com/watch?v=ldc526nHlUQ

I suspect some stability in his career might be all he needs. There are not many environments who can be more beneficiary to a young player than Arsenal. I hope his situation gets sorted soon.

Sad to think that not getting a work permit straight off might have permanently damaged this seriously talented kid’s career. I too reckon he might have settled well here, but there’s still hope if he works hard enough. Can’t Brazilians get naturalised in Spain after a few years, or is that just a myth?

I wonder what the beef is with Wellington? I’ll get my coat…

Give him time. He is still very young, not all people are like Cesc or Wilshere. Wellington moved to Europe and indulged in several things normal teenagers would do. It is because he is away from Arsenal. However, he knows that he has to start making an impact soon. He has all the talent and I am sure if he can get that work permit, Arsene will make a true world class player out of him. His control and skills with the ball are outstanding. I hope he matures this year and gets that work permit.