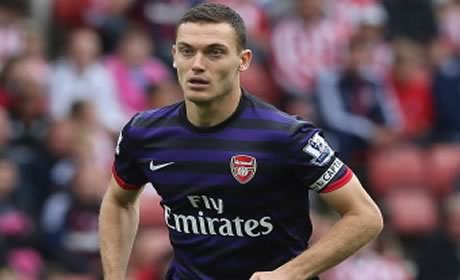 Although he missed Sunday’s game with Man City through illness, skipper Thomas Vermaelen said Laurent Koscielny’s late equaliser had him jumping off the sofa to celebrate.

The Frenchman whacked home the goal that Arsenal deserved and had an eventful game on his first appearance of the season. Via his captain’s notes in tonight’s matchday programme, Vermaelen revealed he’s not a great spectator under those circumstances, saying, “I had to watch the game on my sofa, which is never a good experience for a player.

“You feel more nervous, knowing that you don’t have the control and ability to affect things that you might have on the pitch. Despite feeling ill I couldn’t help jumping up sometimes, and certainly when Laurent scored our equaliser!”

The Belgian was full of praise for his centre-half replacement, and midfielder Aaron Ramsey who started in an unconventional position on the right, but he reserved some special words for young full back Carl Jenkinson.

“Another player I must mention is Carl Jenkinson who had another fine game on Sunday. I even heard that he was trending on Twitter!

“It’s really important for any player to keep improving. There’s nothing worse than standing still and it’s obvious that Carl is making big steps every single week. He’s playing better and better and I’m really pleased for him.”

Such is the measure of his progress that he’ll sit out tonight’s Capital One Cup, a competition he would have been earmarked by most to take part in. Obviously the injury to Bacary Sagna is a factor, but Jenks will be boosted by the encouraging words from his captain.

Loving life at Arsenal right now. Let’s hope we can keep the sprit and momentum.

Mr.BC
Reply to  Gooner Up

Yes, for terry to fall flat on his face. Then his family from the stands to rise up in unison and applaud the event.

They would probably jeer. I can’t imagine a Terry clapping, it’s a little too civilised.

Can you guys believe the match against chelski is not Live in North America? 🙁

The internet is your friend Frank.

Live on ESPN and WatchEspn online. Unless you’re Canadian, then I can’t speak for you.

And koscienly celebrated it like a proper striker!. He ran to the side, a troop of 9 arsenal players behind him, then……sob sob… Arsenal moment.

yeah but what was mertesacker doing with the 360 slide…lets just hope HE never scores a winner in the dying minutes !!

if he scores the winner every week, i won’t mind seeing that awkward 360 slide again and again

But if giroud did that 360 slide it would no longer be awkward…..it would be considered a sexy dance. Come on giroud.

Didn’t notice initially but having relook at the wonderful pile-up celebratory photo, Arteta was the only one facing the camera with his perfect smile. He approaches his game professionally, right till goal celebrations.

It was a bit of a doofus smile, but it’s still Arteta’s smile, so it’s pretty perfect.

Big merts celebrating jump was a classic, it’s a must see fucking priceless

’twas hilarious when I watched back again, up you mighty gunners , how good are we

What a captain!
Sounds like the atmosphere around the club is overall positive
Love it

has he landed back yet ? we need him on saturday

Bub here’s the great thing, unless he’s 100%, we don’t NEED him. I’d take a fully fit with something to prove Koscielny over a tired still slightly sick Vermaelen.

Mert should be rested abit I think. All that dance he did to the goal celebration must have got to him abit. An all better verm and a fit koss against that cunt hazard and mata should do. We haven’t seen the two pair up yet this season, should be exciting

Notice I didn’t put in torres, coz he’s fucking irrelevant.

He jumped and landed on one foot…….Then a chinese movie aura swept across the room. The shaolin verminator!!.

And I also jumped off my couch!

I jumped of the pub stool…. Almost knocked over my beer! COYGs!!

And I jumped off a roof and died but with mertesacker awkwardly dancing for the goal celebration. ……i had to see that!. Thankyou per.

I almost stuced my finger in the ceiling fan.

…followed by a horrible grammatical error.

Stucked your head in next time!

I think Carl Jenkinson trended a good few minutes after the game. This was obviously helped with his now rather famoous plaque (I forget what plaque means now) that said “Hope you’re proud, grandad”. Afobe also commented how he was trending even after the game ended.

Also David Price labelling him as Cafu Jenkinson is so right. That last-minute burst before the crap red-worthy rugby tackle by Javi Garcia could well have been the remaining 2 points we’d lost. Brilliant Jenks.

We have a trend of great right-backs recently, Lauren, Eboue, Sagna and now Jenkinson

Agreed, though Eboue is head and shoulders above all of them.

I love jenks even more for being a Massive Gooner!

NFL has armchair quarterbacks. We’ve got a Sofa Captain. No drop off with Kos in there, and even emulated Vermaelen with a crucial goal. Looking at him and Corporal Jenks we do have some good depth in defense. Bodes well.

I did the Wenger dance.

How does one dislike the Wenger dance?

wasn’t this against Villareal? just wanna know if my memory serves me right :O

The Liverpool, Southampton and City games revealed the explosive attacking, miedfield and defensive talent this arsenal squad has. Our players now work as a team, for the team. The depart of Robin seems to have enhanced our potential as we do not rely on one man only for the goals. The new aquisitions, combined with the experience gained by youngers who now look much more solid than last year (jenks, ramsey, mannone, the Ox) is pleasant and fingers crossed we win something good this year.

What a cap’n! Made up entirely of man and steel. Has no little boy on the inside, like some defective product …

On the contrary, I used to have a little boy inside. But I strangled him when he started talking some sh*t about some Manure sh*t.
Life has been so much less complicated since then …

Nice to hear your captain backing the guy who replaced him. That’s real team spirit and you can’t buy it. What an awesome hit it was too!

A mate just dropped out so have a spare upper tier ticket near the middle for coventry tonight if anyone is in the area and wants it, free and gratis, ring 07534185037

On another note , why’s Theo making such fuss about a central role? I’m cool being on the wings and denying messi his goals…. See you in the final of champions league Arsenal!

Because he has the tactical awareness of an elderly badger on crack.

Unrelated but had to vent somewhere.
Fucking Capitol one cup! I got up at 440am Australia time to watch this. It’s not even televised here in aus and arsenal player has no live feed.
Fuuuuuuuuuuk

haha nah mate, went straight back to stackin z’s…
FIFA 13 is released today, i;ll need them if i’m going to be in any suitable working state on friday haha

You are not alone there mate

I love the Kos but he also made me jump out of my bar stool when he hacked that clearance right to the feet of Kun Aguerro who somehow steered his shot wide of the post. As blogs said, it was pube hair close!
Got to be good to be lucky I suppose.

Giroud off the mark, apparently a quality finish as well!!
Only problem is had to hear it of that ape Tony Cottee instead of seeing it for myself but there’s no streams as far as I can find.
Anyway, before I start to ramble, congrats Olivier, onwards and upwards from here!!

Who thumbed me down….i’ll fucking kill you!

Has anyone got a stream for the game?

One legend standing in for another. When Rosicky, Whilshere and Sagna come back there really will be top cover in pretty much every position on the field.

We are fucking runnning riot.

Reading away should be ok

And le coq was top of this match today.
Played firmly behind giroud from the onset and did well with distribution of his balls to throughout the pitch.

So we can all say le coq stood up and got counted!

well that was good – strange first half, oddly subdued but redeemed by Giroud’s goal second half weird start (two coventry pitch invaders/streaker fail, penalty miss) followed by a goal glut. arshavin impressed theo was pish the whole game so when wenger took off le coq, the ox and giroud with less than 20 to go it looked a pretty firm slapdown to walcott (“that’s how fucking close you are to playing on saturday son, no rest for you”). theo responds by transforming from ball-bounce-off-the-shin-windowlicker-theo to thierry-henry-used-to-do-that-but-not-as-fast-theo with a quickfire brace – both using searing pace and excellent finishing good… Read more »

Hey! Did you guys notice Mert’s expression when Gerv missed that sure match winner? Boy, was I touched! The spirit in the team is……..fantastic.
Keep it up guys and give us long-suffering Gooners something to cheer in May.

Kos scored..and I jizzed. In. My. Pants.

What bloody channel did he watch it on?? I know he didnt stream it. He needs to bring me in to this secret arsenal football network.

Love having this guy as captain. Having a defender with the armband just makes me feel so much better.

Ya. I see that agony when gervinho mis that match winner. I still belive giroud will be great for us. Just need time to adapt.guner till eternity. Love u guys

we appeared to have improved in leaps and bounds (Arsene is also noticable bouncing water bottles off the turf in desperation)…..We are on the up! Next in line for service…..Cheski….a lesson in efficiency awaits.

my favourite moment of the match…. CJ giving Lescott a roasting after a 10 yard head start then a superb cut back for Podolski….shame he blazed it