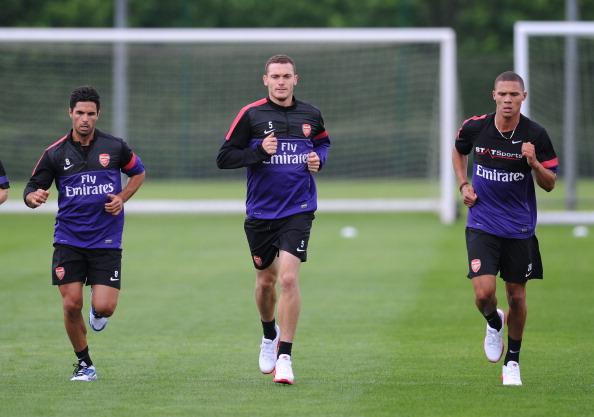 Thomas Vermaelen is pleased with Arsenal’s start to the season but insists that despite confidence being high his team needs to maintain its focus ahead of tricky games both at home and abroad.

Unbeaten after four games, and with two impressive victories under their belt, Arsene Wenger’s squad are starting to play with a fluidity which bodes well for the rest of the season.

“The team has a strong bond in the dressing room and outside as well,” Vermaelen told Arsenal Player.

“It feels good; especially the guys who came in look confident. Everybody plays with a lot of confidence and that is good.”

Of course, with tomorrow night’s Champions League showdown against Montpellier swiftly followed by Manchester City and Chelsea in the Premier League the captain recognises that tougher encounters are on the horizon.

“We have to stay focused because there are a few hard games coming up,” he continued.

“We have to play away at Montpellier on Tuesday and then we have Manchester City so it is not going to be easy. It is good for confidence, we are happy today but Tuesday is another game.

“The Champions League is always different so that will be a test as well, especially away from home. Manchester City are the champions from last year so it won’t be easy. We have to go there and play our own game – I am confident we can get a result there.

Kieran Gibbs has echoed the captain’s optimism ahead of the trip to France. The left-back, who assisted two own goals in a swashbuckling performance at the weekend, claims that after a month together the team’s attacking combinations are starting to gel – as evidenced by the six goals against the Saints.

“People say it was a slow start but I think all we were lacking was a bit of quality in the final third,” the left back told Arsenal.com.

“We had a bit of getting to know each other as a team with the new signings, and we look like a new team now.

“That is obviously why it took us a while to get going. But I think of the four games we have played so far we have dominated all of them and we want to continue doing that. As long as we play the way we want to play, the results should come.”

the only sam is nelson
Reply to  Jsergio

Dr Baptiste
Reply to  the only sam is nelson

He seems to think that our players being asked a question in an interview is PR for the team…..

In Arsene we trust.

All it takes is that seed of belief. As long as the players believe, anything is possible. Things are looking good for the Arsenal!

Somehow the departure got us playing more like a team, we are now sharing the goals and not at all looking to one particular guy to score for us. When rvp was with us if a game came to 60th minute and we are in a loosing position or a heading for a draw, we would spend the next 30 trying to find rvp who was mostly englufed in a surge of 2 or more defenders. Sometimes all that came out of this was wasteful long balls and frantic passing trying to find rvp. But now, we knock the ball… Read more »

I totally agree with u. Though they were painful departures, its all for the better.
Like AW said “its for the benefit of the arsenal football club”.

I remember how there was a similar case when titi left. Titi was a really great player, but this made him an imposing figure to the other Arsenal players as well. Players were almost pressured into passing it to him, even when there was no chance at hand.

The next year team did really well with the Fabregas/Flamini partnership, and with everyone looking to get on the ball, and play more freely. Hopefully we can go one better this year with a trophy!

Did anyone read that in Vermaelen’s voice?

Did anyone read that in Vermaelen’s voice?

I can’t do a vermaelen voice, so no.

it’s all about maintaining focus. That is our biggest task this season. It has been silly mistakes that have cost us in recent seasons and if they can approach every game with the same level of commitment and desire, without underestimating anyone, then I think might well see something new and shiny in the cabinet come the end of the season.

if gibbs overthrows cashley cunt out of the england team that is not bad news.

Meaning he’ll now pair up with Joan terry for Engerlunds backline, that scummiest of cunts!.

I think that’s the worst piece of news.

Ca$hley and terry deserve each other. I bet they talk about cuntish things in both chelsea and England lockerooms.

Eg. Terry:Who will I racially abuse next?, You got my back ash?.
Cashley: sure thing. (cunts!!!)

Ya, I bet that’s what they talk about. Dope.

Don’t worry, I don’t think JT will be holding his place down much longer. He’s past it.

This is random but still worth saying: I hope our fringe players can contribute to helping us win this season.

I mean that’s the only thing that worries most Arsenal fans is the lack of depth in certain areas, right? So let’s hope players like Arshavin, Djourou and Chamakh put in good performances when they need to.

I don’t think we lack in depth anywhere. I did think we would need another central striker but seeing Gervinho play so well through the middle on saturday, with Podolski no doubt able to fill in too, and Giroud no doubt soon to start scoring when he wants, I think we’re pretty much as well stocked as we can be all over the pitch.

There is one big weakness in this squad though. We have no one capable of replacing arteta.
Of course if coquelin/frimpong can step up, that would make this squad almost perfect

Coquelin did well on Saturday, so I’m not too worried. Obviously if our first team all went the season injury-free, or as close to, then that would be great but I think this year our midfield is easily able to match City’s player v player.

We also have no adequate replacement for Cazorla. That worries me more tbh. Rosicky is Rosicky and Ramsey is almost certianly not ready to slip into Cazorla’s boots, although his last performance was very good.

If Arteta gets injured/suspended, we would probably play Coquelin and Diaby and instruct them to stay disciplined. Or Wilshere when he’s back.

Gibbs’ performances this season have left me very impressed. He’s been excellent going forward, and even though he’s mostly operated as a left wingback in these 4 games (as his heatmap will tell you), the attacking and defensive side of his game has been well-balanced – bar a few times when Arteta has had to fill in for him. Hopefully, his injury woes are well and truly behind him, and he can get a good run of games under his belt (30+ games this season and I’ll be a happy man!). Because if he does, there’s no question that he’ll… Read more »

Definitely an upgrade to Clichy.

Nuff said. Game at city will prove whether we are genuine title contenders or not. I think this is out season. Time to leave that unlucky 7 years behind.

reckon wenger broke a mirror or something?

Sorry if a little off-topic:
Whatever you think of Vermaelen being the captain (and I think that so far it has been all good), doesn’t it make it harder for Arsene to drop him #if# his form dips later on this season?

On topic:
If we maintain the focus, intensity, and teamwork throughout the season without switching off, we will be hard to beat.
Basically we need to be consistent in (bigger) patches.

So it would be better for the team if we didn’t have a captain because, by your reckoning, anyone who is captain cannot be dropped. Bollocks!

No, but a captain is generally someone who has no reasonable chance of being *dropped*. Eg – RvP, Cesc, Henry, Vieira, Xavi, Casillas, Kompany

I think Vermaelen will look much more consistent this season — seems as if he’s been instructed not to make so many forward runs, and is spending a lot more time doing his job (defending). We have many players capable of scoring, so he can be more disciplined and hang back.

““…… we were lacking was a bit of quality in the final third,” the left back told Arsenal.com”. You never realize it and then one day you wake up and start sounding like Wenger. I bet arsenal fans the world over have looked at school teams and commented about a returning player “you know what he looks like a new signing”.

Perhaps Vermaelen’s appointment as captain has contributed to his excellent start. Time and again, we’ve seen top players reach an even higher level when handed the Arsenal armband.

if GERVINHO actually drove down the middle and scored a GOAL like he did this last match(those 2 words hardly worked positively in the same sentence), and he went on to score another,…and nearly another…! THEN this arsenal team has improved. he actually played top 9! Gibbs going thru the left allows POLDI to shift more into the box like a 442, and that is the next best thing to GERVINHO actually attemping a hat trick(though if he did, i would’ve collapsed). As for those waiting to measure our level with the City game, know that ARSENAL has little problems… Read more »

I HATE it when PEOPLE use capitals where they ADD no EXTRA meaning to A sentence.
YOU idiot.

I just hope the wins continue…Arteta is pure class…Cazorla is a destroyer…i bet Silva’s eyes will be filled with tears come Sunday when the destroyer destroys his team…oh i almost forgot that Man Shitty have more cunts in their team in Na$ri…hahahaha…cant wait to see his face turn red when we bang in 4 goals at Etihad. COYG, In Arsene we Trust.

Gibbs’ sliding manoeuvres give me just the boner I seemingly never expect.

The way he runs in from the side, eyes on the ball, calculating his steps and then pounces on the ball with such swift precision is just……wow. I love ‘et!

YOU hate it? you did it TOO. IDIOT! now i am just laughing cos i catch your fun. Nice to spice things down here. Others be thinking we’re fighting. Gunner family.

Sorry, missed the ‘S’ and the gender apparently… she did it to mock you

Everytime Vermaelen make that majestic run from the back to attact.. It’s the most awesome thing ever!! :*

@giddygun if there are 4 teams plus 16 other teams the prem would consist of 21 teams including us. just saying.

I completely agree with comment above. There are many important players at Arsenal right now and I am thrilled so far with the spirit and quality in the squad. But honestly I love mudders. Guys that go out and do their job. Whatever the boss says that job is on a given day. Mikel Arteta, you sir are top class. I mean top drawer footballer in every sense of the word. Work rate, technical ability, unselfishness…all of it. Vermalean, Cazorla, Podolski, Jenkinsen in place of Sagna, it takes everyone to be sure in a successful trophy winning squad. But Mikel… Read more »

Did ya’ll see it? Gibbs said Arsenal were LANT! I like that.