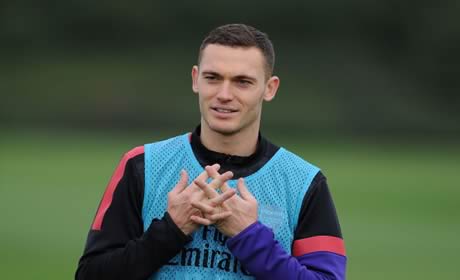 Thomas Vermaelen wants his Arsenal team to ‘send out a statement’ during today today’s game with Chelsea at the Emirates.

The skipper, who missed last Sunday’s draw with Man City, will come back into the side and admits that given the way the team are playing anything less than three points would be ‘disappointing’.

Speaking in today’s official matchday programme, Vermaelen said, “A win today would send out a statement that we’re in very good form.

“We’re a home and this means that any other result would be a little disappointing. We’ll be going for the three points today, aiming to make sure that only one of these two teams remains unbeaten.”

The captain isn’t blind to the quality of the opposition though and spoke about the threat of his international teammate, Eden Hazard who will certainly occupy Carl Jenkinson down the right hand side.

“People talked about him a lot when he played for Lille,” said Vermaelen, “and understandably so because he’s one of the most talented players in Europe.

“At Chelsea he has already shown what exceptional quality he has. He can do a lot with the ball and has the ability to decide a game on his own, so we’ll have to keep a close eye on him.”

But Vermaelen is confident this Arsenal has what it takes to do the business today.

“It will be a tough game but we’re full of confidence after a really good performance against Man City and can’t wait to get going against another unbeaten side. ”

The Verminator: Come with me if you want to win.

Yes sir vermaeleen. We should pick off from where we left at citeh and I believe we’ll get a positive result. Win this one and leave a marker for the rest of our season. Come on you gooners!
Terry is still a cunt.

Too Drunk To Be Offside
Reply to  Ferngunner

Yup, we shoulda won last weekend, lets do it today.

Statement…. Boot to that racist cunt’s face… That would do along with 3 points

The Captain is back. Lead the way. Gooners faithful, LONDON IS RED.

“Send out a statement”…..that we will!
Can we send out a boot to john terrys’ face aswell? I trust you’ll handle this vermaeleen.

So basically he’s gonna run the length of the pitch in the 94th minute and score the winner? After John Terry slips on the penalty stop?

I hope Terry will play, I hope he will slip again. I hope we will win even without his help against the best opponent so far.

Citeh? have been the hardest so far and we still got a result. As for chelsea fuck em!.

i dare say chelshit look better than shiteh at the moment.. nevertheless i’m sure we’d get the job done.

After the excellent defensive performance last week, who do you think will be dropped to make way for Vermaelen? Arsene has a tough decision to make.

I think we might see Koss partnering Vermaelen today, considering the opposition we’re against.
But honestly any combination with or without Mertesacker would be fine.

Frankly I don’t think it would be a very easy game, but it’s still one we should win.

Wishing the GUNNERS the best in today’s match,we CAN do it guys…

and the statement is:

“here is the church, here is the steeple, open the door, and see all the people”

I would really like all three Verm Mert and Kos to play. Perhaps Gibbs to make way and Kos or Verm on the left. We could do with the extra muscle and it would be harsh to drop either Kos or Mert after their performance last week at the champs away.

Ferngunner
Reply to  Too Drunk To Be Offside

What? No.
Gibbs has been magnificient aswell, either mert or koss will make way. Mine will be mert but whoever makes way we’ll still be exchanging 100% for another 100%. Selection solution! Like wenger said. Excited.

I do hope we start Giroud with Poldi and Santi behind him. He scored and we will make a very potent strikeforce. Also Ox starts as he did super defensive job at Anfield and against Hazard Jenkinson could do with some support that Gervinho may not provide.

He haven’t lost to that mob for a while and lets keep it that way………….three points.

I really fancy us today. Walcott has to play for me…..

I don’t know why I made so many posts lol

I think the lads feel they deserved 3 points up north last weekend and wanted to send a statement by that. Now, they know they have the quality to compete with the top teams and want to remove all doubt to themselves, the fans, England and Europe that this is a different Arsenal team from recent years.

Three points would be a massive boost going into October and into a run of fixtures that we can really take advantage of and gel as a team while we ramp up our form. COYG.

We’re at home… and London is OUR home! There will be only one team in London today, who will make sure that all see RED!
The Captain has spoken… London is only RED!!!
And that is only the beginning of our statement….

Cunt hazard might be tricky inside the box. Better keep him outside, he’s won many penalties due to this. His has quick legs and when putting in a challenge I hope our defenders focus and not rush in to a challenge. An all round focus will win us this one, be swift in counterattacks and if we can be able to get diaby to show up like he did at pool then I reckon our mid will be superior. I have no worries, about caz and arteta coz as long as they got each other I expect an astute display.… Read more »

Damn these time zones – up at the crack of dawn only to watch the arsenal. I must still be dreaming. Come on you gunners!

The difference is with these statements the players make, this season is I believe them. Last few years was all talk followed by a poor performance. Have full confidence in this team now.

At least we created all the goals…
Koscielny 2 – 1 Gervinho

Two problems, two goals. The first one’s simple, a total lack of defensive organisation. Plenty of people prepared to point and shout, but nobody to take overall control and deploy the troops. That’s quite simply a “missing BFG” problem. The second is more complicated. I have to first point the finger at Mannone for his positioning. If he’s to have a wall that size at that range, it’s purpose is to cover the near post, so the threat he should be covering is the far one. Secondly I can’t help thinking that a longer, BFG sized, leg might have kept… Read more »