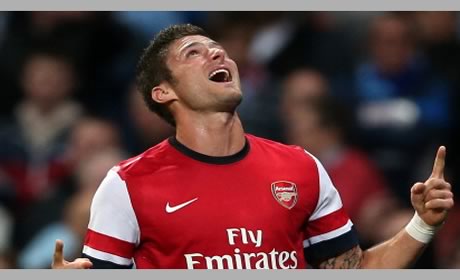 Arsene Wenger has admitted Olivier Giroud was struggling with the fact he’d yet to score for Arsenal ahead of last night’s Capital One Cup game against Coventry.

The £12m man had failed to hit the target until last night and although the boss said the pressure he put on himself was far greater than any put on him from elsewhere, he expected the striker to take the confidence the goal will bring into the games to come.

“It was in everybody’s mind that the sooner he gets it the better,” he said. “Certainly in his mind much more than in others’ minds. That is positive of course. It was a good finisher and he is a good finisher, Olivier.

“At the moment I believe he is looking for confidence again and that goal will help him. I expect him to take that confidence into the Premier League.”

Giroud’s clever, clipped finish to put Arsenal 1-0 up was a sign of his quality and hopefully the floodgates have now opened. And the manager was also full of praise for Theo Walcott who put his contract wrangles aside and scored twice, with the hint that he might be given a chance centrally.

“I am not against it, not at all. We will try. At the moment we have a big competition up front, we have a different formula and the team is doing well. His time will come for that and at the moment we have to be a bit patient. He is a great finisher now, Walcott, in front of goal he is absolutely amazing.”

While the Capital One Cup is, primarily, a chance to give youngsters a run out and some first team experience, it’s also a way to keep the fringes of the first team sharp and ready, and no doubt Wenger will be pleased that Giroud, Walcott and Andrei Arshavin all contributed to the victory.

A reportedly fine performance from Francis Coquelin will do him no harm, while Emmanuel Frimpong’s comeback gives the manager more options in midfield.

All in all a good night and many positives to take.

Took it like a boss. That’s pure confidence my fellow gooners. Pure confidence me tells ya. Now hopefully this should be the first of many.
(Wenger already knows of this I think)

He’ll score against Chelsea (if he starts).

Great goal from Giroud, and he shouldn’t be to worried about the penalty, looked like he struck it well and into a good spot, just a fine save. He may not have scored before today, but his passing around the box has been fantastic from what I’ve seen with two assists so far to lPod and AA. He’ll get there.

The streaker was apparently rvps little boy all grown up with a sense of belonging at the emirates stadium.

And Giroud is off the mark. We all love it. B

Great performance last night (what i saw of it). Giroud was always involved, great to see Arshavin playing well and a couple of the youngsters looked very good. I know it was only Coventry but still they more than got the job done.

I will love it if he scores against Chelski
Bring it on!

Well Wenger did say Drogba used to bully us. Hopefully we have our own wrecking ball now. A handsome one at that

Don’t think we should worry at all. Remember, Henry didn’t score till his 8th game with Arsenal.
Wenger knows and we ain’t a fucking sugar daddy cock sucking team! We got dignity.
Cmon you fucking Gooners. Let’s do something.

I think a lot of them needed that game. Ignasi miquel kissing the badge. Fucking brilliant moment. Well played to the whole team.

Now for those other rich cunts this weekend.

Tear the roof off the stadium this weekend lads!

You can only beat what’s infront of you and rightly so, we dispatched off coventry in a rout with our second string!. Next up is chelsea, knock afew past them and lay down a marker for the rest of our season. COYG!

Where can highlights be seen…. anyone?

Arsenal player or 101greatgoals (i think) …

Arsenal Player. Well worth the few bob if you’re net a mamber yet. you get a copy of So Paddy Got Up with a Red Membership too 🙂

The invincible arse
Reply to  OTOTBOTBAG

footytube has a decent chunk of highlights

Great to see the team having more depth and fringe players doing well,however I think coventry isn’t a proper test for this group of players,hpe to see them perform as well under tougher opponents.

Brilliant finish by Giroud. But not a good penalty – it was too close to the ‘keeper and at the wrong height.

My favourite moment of the night was the Ox’s blockbuster goal. I want more Ox!

It was fun playing with Giroud.

Is he a good gay?
See you at training tomorrow

The highlights (cleverly packaged) showed for me, that our second level of squad (fringe players, youth) looks quite dangerous. It was Coventry, but it was still some pretty football. And Olivier looked so relieved, the kid deserved it. Anyone who doubts his skill need only see how he holds up the ball, and makes nice passes to set up teammates. He’s contributing despite the solitary goal in his account.

After watching the chelski game and although I Am gutted I am pmsl at these comments about giroud. He scores against coventry and everyone thinks that’s it! The goals will come now.lol. he is useless, no excuses.I watch my 12 year old lad play local league every Sunday (Wales schoolboys too) and he could show this clown how to skin a keeper and slot a football.I dunno what he’s on but how anybody can miss sitters as regular as this guy and claim ridiculous wages is disgrace.I don’t mean just the sitters at arsenal. YouTube him.you ll c.