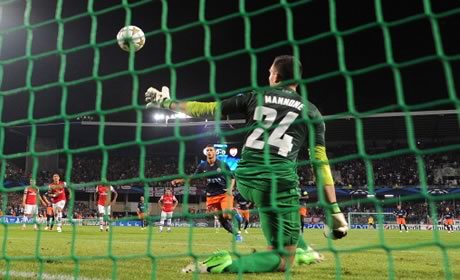 Vito Mannone, currently enjoying an unexpted run in the Arsenal side due to injuries to Wojciech Szczesny and Lukasz Fabianski, says he was mad as hell when Arsene Wenger told him he felt he wasn’t ready for first team football.

After a spell in the team in 2009, again due to injury, the boss told the Italian stopper he needed more time to mature, but Don Vito, with the impetuousness of youth, didn’t agree.

“I had some tough time, as in 2009 I played for 10 games after Almunia’s injury, but the manager did not think I was ready,” he told Corriere della Sera. “I was absolutely furious and wanted to leave. Now I understand and have achieved maturity by working hard.”

A loan spell at Hull gave him regular football and renewed confidence, but even then Wenger made it clear he’d have let him leave this summer. The poleaxed Poles opened the door for Mannone though, and he’s setting his sights on a long stay at Arsenal.

“I am happy at Arsenal and want to be Number 1 here,” he said, but also revealed he’d like to play in, and for, his home country at some stage.

“I’d love to play in Serie A, hopefully with my beloved Milan. I have always supported the Rossoneri. And finally, the Nazionale, which I already experienced at youth level, but the senior Italy squad is very different.”

There’s no harm in aiming high, that’s for sure, and with no sign of Szczesny returning in the very near future, he’s going to have more chances to prove he’s got what it takes.

Should have said this after his stint at hull. But now that he’s on a rich vein of form I guess it’s okay too.

Glad Mannone realized that Arsene was right and he buckled down to become the keeper he is today. Maybe he can give some advice to young Mr. Walcott.

I think I remember hearing that Mannone was Walcott’s best friend in the squad. So there might be some merit to that.

Whatever happens to him, he will always have the option of playing a Mafia Henchman if his career goes tits up.

He seems a damn sight more confident than Almunia /Fabianski and that makes me feel a whole lot better.

Fact remains that it is very unusual to have 2 outstanding goalkeepers at one club.As long as the 2nd string can do a good job and keep the No 1 on his toes
that is ok.
Some clubs would be v happy to have Mannone and Fabianski as a back up.
WBA last year as an example,such a shame.

I know it’s early days this season, but I’m still not completely convinced he’s up to the task long term. Maybe it’s just me and i’m judging him unfairly because he hasn’t made any ‘flashy’ saves to really show his class, or maybe his class is that he gets into the right positions and doesn’t have to make those saves. Either way, I hope he keeps working hard as he seems to be doing, especially on the balls in the air, which he does seem to fluff at. Still fully behind him though!

I agree with you, he’s a bit suspect in the air at times and hasn’t looked particularly outstanding like Szczezny did when he started out. But the great thing is he hasn’t had to be so great and he has not only done his job, but also become much better as this run of his has continued, so much so that we are all less worried of his position. Think about it. We have always complained about goal keepers and there were many fans complaining saying we need one, but imagine we are down to our 3rd keeper and still… Read more »

One thing I just thought of in Vito’s favour, he seems composed and consistent. My mate and i have a running joke that Szczezny makes one absolutely blunderhead decision or action per game (see Southampton goal), which stops him from beignet a top tier keeper I feel. Haven’t seen Vito have that one ‘how the **** did he manage to bollocks that up moment.

oh come on ! find your own name

I like your perspective on this, FRG. Please accept a green thumb.

Yeah I think Vito handlin of the high balls, esp during WestHam game leave much to be concerned abt…hopefully he can improve on that side of his game. He’s definitely No. 2 for me once Szczesny recovers…not Fabianski!!

I think Fabianski is better than Don Vito.Well he was awful at times but there can be a change in form who knows?maybe like rosicky’s.
Still curious how long is fabianski out for? Never heard of him in any news site when is he expected to return.

I agree with you, that I prefer Fabianski since he really was playing great for two or three months after the penalty save at Partizan. His injury opened the door for Szczesny (which ironically enough was inflicted by Szczesny during warm ups). Although, Mannone’s form has been impressive, and definitely exceeded any expectations I had for him. It’d be a difficult decision for Mr. Wenger, but it’s a good one to have. Funny how several positions will have that problem once players return from injury?

Despite his retrospective agreement with his dropping I still think it was unfair to have dropped him back then because if we had persisted we would have had a world-class keeper in our hands by now. His angry, but true sentence, back then mirrors it all ‘With Me, Arsenal never lost’. FYI, the first EPL game that Mannone kept and Arsenal lost was against Chelsea and I dont hold him responsible at all. Best of luck, Don Vito. *kisses knuckle*

You know, correlation and causation are 2 different concepts. And your speculations mean pretty much nothing without valid evidence.

We should encourage intelligent comments not shut them up. Have a bit of class.

Kind of rare to have 3 keepers in Arsenal all vying for number 1 spot and fans not minding this. I still remember some fantastic Fabianski reflex saves (That one against Shef Wed was incredible), but also his howlers. Szczesny too I suppose, has had many howlers, but right now Mannone looks pretty consistent and doing very well. I thought dropping Mannone for Szczesny against soton was poor, as it was indicating a lack of faith from Wenger on Vito’s abilities. There’s also the argument that dropping your number 1 isn’t good for his confidence, but did we all have… Read more »

With schezzers and fabianski approaching full fitness and martinez being an especially good stopper. Maybe we might just cash in on mannone as early as january, especially with his price now near £5 milli something I never would have began to imagine we would ever get for mannone. Ac milan seem to be clearing out alot of first team players, kinda making an overall wholesale change In the team (Mannone could very well be part of this). He might just get his “dream” move sooner rather than later me thinks but if he does stay then you won’t see me… Read more »

Get real mate, no one is going to pay anything close to 5mp for don Vito. Get a cup of coffee.

Some few years ago you’d have told me that then.perhaps I would have agreed. But it’s 2012 and a.team called litterpool just shed off £35 million on a tall carrol. Mannone for £5 million seems not too far farfetched now does it?

I have to say I don’t quite agree with you by saying Vito hasn’t made some world class saves to prove to you he is a good goalie. To me he has made couple of great saves almost every match he played for us this season! Remember that save of Gerrard’s shot against Liverpool? And the one for Suarez -the-diving-cunt- effort in the same match? And also remember the Company’s volley which he saved and which could have earned City the win! These are just few that immediately came to my mind, but I am sure there are more! So… Read more »

I totally agree. Come on, he’s played a good string of games in a row for us now, and really has yet to let in an embarrassing shot. Give the guy some credit — he really hasn’t cost us a game this year. Never would have expected he’d be so consistent for us.

Mannone should be removed Szczesny is much better.

Unless Vito starts playing like his man of the match performance against Fulham,2 yrs ago I think, I won’t be satisfied. To be honest Im not entirely satisfied with either of the Poles either. While I do like Sczwseadasny I would like to see a true world beater between the sticks.

I hope that when he’s that good and we needed him, he won’t shut the door at us just as the Dutch skunk did!

I don’t get all this about Mannone he has been OK no better than Fabianski or Almunia.If you were to rate him as a premier league goalkeeper he wouldn’t make top 10.

I can’t remember a team winning the league without having one of the top goalkeepers. It hurts me to say it but with Friedel in goal we wouldn’t have lost to Chelsea. I love to see players come through the system and will be happy to be proved wrong but for me Hull is his limit.