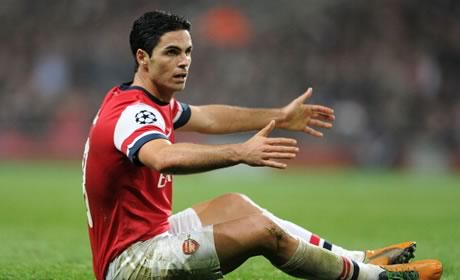 Arsenal’s players have reacted to last night’s defeat with the stuff players say after a disapointing defeat.

“When you’re going through these moments, you need to show character. Unfortunately we didn’t today but I hope in the next game, it will be the Arsenal that the fans deserve. We’re playing for a big club and we need to show it.”

“We have to put this night behind us. We have a very important game on Saturday against QPR. We have to bounce back after two defeats. There’s not any question about that.”

I think these player reactions are best summed up by this wonderful blog post by East Lower.

Quotes via arsenal.com – except the Djourou one which we made up. This should be obvious but given how seriously everyone is taking everything today we thought it best to clarify.

and how I don´t missed todays Ivan´s reassurances…

What was gervinhos reaction?, oh wait ….he doesn’t talk to the press that much.

Can he also not play that much!

Gervinho’s reaction was to stumble. Get up. Then stumble again

All well and good coming out with this sh** after the game, how about showing some passion during the match and not just turning up for the paychecks like the greedy b****** they are. People always say they like the players at the club but in all honesty I hate them. Never any passion, always someone wants to leave, no respect for the club or the fans by constantly demanding money like Theo Wallet. I’m a huge Wenger fan, but if he can’t control his players then we need to take it out of his hands. The policy on players should… Read more »

I dont understand people getting upset when they read players reactions. Of course we all want them to do their talking on the pitch, but player interviews and reactions are part and parcel of the game. Move on.

I think the frustrating thing is that they say the same things over and over and continue to have the same results.

Press: what do you think about yesterdays performance?

Instead of telling us of they’ll “bounce back” the next week how about they all just shut up. Or give one word reactions like mert did.

Yet again, why the 21 year old who had his career blasted back to the stone ages by Shawcross? Why is he the scapegoat when the whole team plays poorly?

That is the most ridiculous attempt at humor that I have ever seen in my whole lifetime.

We will be seeing a copy and paste of this on Sunday as well.

Johann Djourou: “Last night’s result was all about the creation of the toxic asset bank in Spain. Players worry about the viability of their Mediterranean portfolios and with this fiscal rock about to be thrown into the pond, they find concentrating on football difficult – I think we can all understand that! Meanwhile the Schalke 04 squad’s investments in Balearic assets rather than the coastal mainland has seen them sheltered from the worst effects of the financial contagion that has spooked so many of football’s elite”.

That’s the actual quote, in case anyone was wondering

Andres Santos reaction- I am sorry i fucked up Gays. But it won’t happen next week.Gibbs will be back!

This temporary team slump is way better rather than having individuals whose slumps the whole team used to rely on i.e. RvPs. Full support with the team.

Arsenal make shooting and scoring very hard for themselves. I don’t know. Other cl teams find it so easy to shoot and score.Even with four to five defenders the strikers seem to find the goal but not Arsenal . I wonder why. Now Ivan said the gunners could compete in two years presumably thru sponsorship deals.Arsenal maybe a big brand but as long as they can’t compete ,the funds will be only 50% to 70 5 to what red faced. can get. It’s reported the rf is asking for one billion sponsorship deal That will widen the gap with the… Read more »

The problem at Arsenal is not about money – it’s about culture. Today we heard the same old predictable bullshit from Gazidis about finance and how we are going to compete soon. It’s bollocks. Until we get back to basics and look at the way the football team is being managed we will not move forward. Why are there so many average players in our squad? Why are we so weak in key positions such as strikers and goalkeepers? Why are we, after a good start, still conceding bad goals? Nobody want to point the finger at Wenger and his… Read more »

Blimey this is tedious. Manchester United, Chelsea and Manchester City are the only teams other than Arsenal to win the league since 2004. Care to check the spending habits of those clubs? You do realise that unless you can demonstrate that there’s a manager in the English game, who can win the league and cups without spending on the level of the three clubs that have won it since 2004, your “change the manager” schtick is just empty bullshit? And that the only realistic alternative to Wenger is a less able manager? And you can’t demonstrate that, because there is… Read more »

Just as we keep hearing the same bullshit from you, fats.

Bollocks! Don’t be brainwashed. We CAN compete, only if we spend our cash wisely.

I clicked on the video of Arsene’s reaction on Arsenal player. He looked despondent and disappointed with the performance.
Then I realized i was watching the post-Norwich interview..

When are we ever going to get wingers, proper wingers who can create chances?
I miss those days. Even the days Adebayor used to miss 6 and still score.

Two shots on target in two games! Someone put a media ban on these players till they get it right.

As long as Arsenal win the champions league in my lifetime…

Can I be more frustrated when I read these cliches? YES. Players needs to shut up and give everything on the pitch on saturday. I mean EVERYTHING. show us your worth to wear Arsenal shirt ! COYG!

Santos maybe good at going forward but he failed to stop the cross for the second german goal.IMHO he is too ponderous and slow .I think Wenger must have been desperate to sign him last season.
Ivan was quoted as saying the gunners will be competutive in two years time. He said UEFA enforcement of ffp will help Arsenal.Whats happens if UEFA can;t follow thru the measures. Don’t assume 100%.

Wenger is responsible for the current problems afflicting Arsenal.The board have complete faith in him. He wants to play football like Barcelona.That;s why he bought guys like Ashvin,Denislson,Vela,Walcott,etc. Alas the epl is a monster and the gunners constantly get bullied by Stoke and other physically imposing teams.
He shd be off asap . Then we will see some pragmatic manager putting the onus on winning and to hell with the pretty soccer. Winning comes first.Do you think the rf doesn’t win ugly?;

I agree with everything you wrote up to the second sentence.

Players wages should be docked for the past two weeks

Offload Gervinho and bring in a proper winger, i dont care if its another 17 year old. He drives me mad everytime he has the ball

Mate we can’t even get rid of Squillacci, Chamakh, Denilson or Bendtner! Gervinho ain’t going anywhere anytime soon but the African cup of nations is starting in about 2 months, so you won’t suffer for too much longer.

Typical reactions from today’s “fans”. I get what you’re sayin’ and the players have been terrible in the last 2 games but it’s just two fuckin’ games! What about showing support to a struggling team: football isn’t about just winning unfortunately. What about the fans in the stadium yesterday, all I could hear were the Schalke supporters. What’s that with booing our own players, is that going to help? Ridiculous.

I don’t think fandom should equal blind support (Nothing should). You’re right that football is not only about winning. But it’s how we are playing that’s the concern. Bottom line is we have been serial underacheivers

it’s very difficult when you are without your top players to be able to compete. The fact we’ve lost Gibbs/Walcott/Szcz/TheOx/Diaby is too much for us to cope with. If Walcott/Gibbs/Sagna/Wilshere are back to play at least some part together on Saturday then that will be very welcome. If you look at the 4 wide players last night: Jenkinson/Ramsey/Santos/Podolski there aren’t too many of those that will go past players like: Sagna/Walcott/Gibbs/The Ox will, so when you add that up it means we lack penetration down both flanks (i’m not having a go at Podolski, i really like the guy, i… Read more »

Celtic scored more goals against Barcelona than we could against Norwich and schalke.obviously we should sign fucking samaras!

Platitudes and spin,it is sickening.

These last two seasons I’ve see nothing but players getting involved with the media and social media. Makes me feel like they are too preoccupied and not concentrating on their job. Used to be only the manager and Captain who say anything after the game.

I will be the hero that The Emirates needs…

Shut up and show some pride and passion instead of moaning in the press you overpaid c***s. I`m so fucking tired of hearing useless comments like “I’m positive this group has a lot of quality to come back” or the famous “mental toughness” from Wenger (he can stick that up his arse). Arsenal is the weakest team in the EPL mentally. We sold the only player, some dutch bastard, who scored goals last season and replaced him with nothing but a a fat bank account. And it seems like we will keep loosing our “top” players (not that many left… Read more »

Filthy performance. Went to the game and im all the way from Australia. Devastated that is is my first and only champions league game I will see in the foreseeable future.

As much as everyone loves to give gervinho abit of grief, I will at least acknowledge that every game he’s on the pitch he puts in 100%. Sure its 100% of utter shite sometimes, but at least it’s a total effort.

The cuddly maverick makes me want to shoot him at times though, that’s the kind of performance that really makes me ashamed that he gets to pull on the red, and this is from one of his biggest defenders.

I wonder why we keep playing for possession in games like this when we see we can’t create chances. What’s the point of making 74647485 passes in the middle of the park without getting into the final third? Couldn’t we let teams come at us a little more and try to exploit some gaps to counter attack?