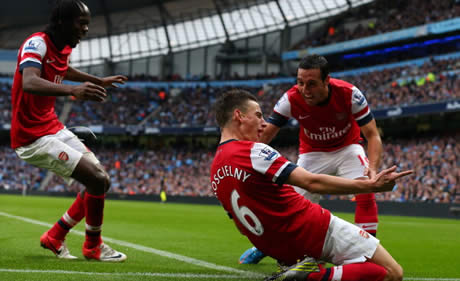 He was probably Arsenal’s best defender last season but this time around Laurent Koscielny hasn’t played as much as he would like, and when he has he’s struggled to find the form he showed in the last campaign.

However, with Thomas Vermaelen moved out to left back, the Frenchman has come back into the side and he’s determined to make the most of his chance.

“It’s been hard, of course,” he told the official matchday programme. “I lost most of pre-season because I was away with France, and then I had an injury right at the beginning of the season.

“It was difficult to come back from that quickly, the season had started, the players were up and running and yet you still need time to get back to the level required.

“I know that I’ve played some good games and some not so good this season, but I’m working hard to stay fit and well. We have great competition for places at the back with guys like Per, Thomas and Johan, and we have a lot of respect for each other.

“It’s healthy for us and we don’t stop trying to improve as individuals and as a unit.”

get back to Top level already! i have a feeling next week’s sp*rs’ game is gonna turn around our season like last season!!!

Why wait until the game against the scum? We need to win today, nothing less.

Scum play citeh tomorrow.
AVB has a plan to beat them this weekend!!

“I will text all the City players just before the match and tell them it’s a Champions League game.” – AvBLAD

He has got his own goal quota achieved so i guess now its gonna be all awesome display from laurent , kos i cant see otherwise.

Kozzer is the unluckiest player in the team. I don’t think he’s been awful this season. He’s just had some bizarre misfortune with the own goals. Balls that could’ve ended up anywhere ended up in his own onion bag.
Vermaelen, on the other hand, needs to kick himself hard up the backside and start concentrating properly. That pathetic attempt at a clearance against United lost us the game in 3 minutes. He is quality on his day, just needs to cut out the nonsense and show his authoritaaaah as captain.

Do not rewrite the history, please.

“He was probably Arsenal’s best defender last season” . Probably? The guy was our 2nd or 3rd performer of the season.

I think today he showed some of the quality of last season coming back. All it took was a run of consecutive games and he already looks sharper. Quite pleased about it as I am a big Kos fan, and today he made some superb tackles to stop break aways. Just like Giroud, the more games he gets the better, and the more his quality will return.