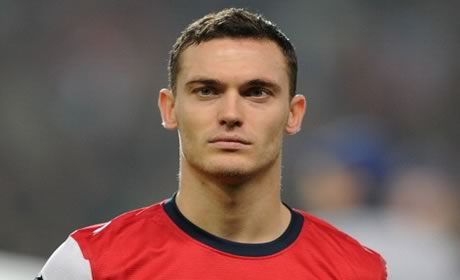 Arsene Wenger says that Thomas Vermaelen’s recent below-par peformances may be because of pressure he feels as captain, but has backed the player to come through it and provide more defensive stability to the team.

The Belgian hasn’t yet found his best form since taking over the armband and a number of individual errors have proved costly, not least against Manchester United last weekend when he provided a lovely assist for Robin van Persie.

However, Wenger says that Vermaelen has the character and ability to react and become the figurehead he wants him to be.

“He is a guy who is completely involved in the game, he breathes his football from morning until night. He thinks about it and wants to do well. If he deserves to play, I play him. Are you captain or not, I think he deserves to play. He can help our stability at the back, that is important.

“The game at Schalke we wanted to win but we could not afford to lose it. We made at least the second part of the contract and overall it was important for him to be stable defensively.

“Physically he is in outstanding shape. On Tuesday he was quite outstanding. I think what has happened to him in recent weeks has affected his confidence. Overall physically he has no problem.”

And Vermaelen himself is keen to help get things back on track, starting with Fulham today.

“It’s a big one for us,” he told the official matchday programme, “and three points will be very imporant. It’s still quite early in the season and while a defeat means you can drop in the table quite noticeably, a wins puts you right back in there.

“What happens today will be down to us and we’ll be doing everything we can to get the victory.”

The Arsenal match-day programme is available to download on iPad and it’s quite excellent – click here for details.

Heres hoping TV5 and the rest of the squad can step up and push on starting with a win today. COYG

Now with Mert and Kos in the centre , its an opportunity for Vermaelen to get his confidence back even though he might not enjoy playing at LB.

I bet he’ll come good. He’s a strong character and has battling qualities.

Come On You Vermaelen !

Sure he has struggled for form this season, is it the added pressure that comes with the armband? maybe, but you get the feeling that Vermaelen loves the club and he has been hurting as much as the fans, i’d back him to the hilt.
He hasn’t become a bad player over the course of a few games but you can see his confidence has taken a knock, so let’s get behind him and let him know we still support him 100%….COYG

Is it just me or has anyone noticed that Verm seems to have lost a pile of weight to the point that he does not really look as healthy as he did in his first season?

nothing but 3 points will do today

Common Verminator..! Wake up from the bad dream.

I heard when he does press ups it’s actually the earth that moves…..

Come on 3 points today and a great performance!

Vermaelen and Koschelny should be dropped they have both been terrible this season and there mistakes keep costing us points. Why do we have to play our captain when he can’t even win the toss. Its time for them to get there shit together on the training ground.

You sure have been taking some weed man.

djourou is the form CB?

in which games did he show this scintillating form mate?

He has played once this season he didn’t fall over, score an own goal or give the ball away to his mate to score. Thats form in this day and age.

HFB to score today and celebrate with the gangham style.

Its a shame that playing in a position he’s not strong in, is probably not the best way to play yourself back to confidence.

Hopefully he’ll concentrate on the simple things rather than rushing forward, trying to make something happen (a natural thing to want to do, but leaves us exposed, especially on the flanks).

If not, might be time for him to pick up a ‘knock’ for a week, until he can return to his strongest position, and where he’ll return to form quickest.
He’ll come good again.

Can he put off “picking up a knock” untll Gibbs is fit???

He will be fine. He was lauded last season and its not like he hasn’t got good performances in him. He hasn’t suddenly become squillachi.
We know he’s good he just needs a few confident team performances and he’s back as the Verminator.

No problemo. Verminator will be back

Top level sport isn’t easy, and sometimes top level players have to just play through a bad patch, i have no doubt that a few good performances will help him find his form and confidence again, which is just as well because we don’t seem to have any quality back up players..

It’s a shame we’re not as understanding & forgiving to other players as we are to Tv5.
But I like the positivity of the comments thus far, the Verminator will probably score today, lets just hope it’s in Fulham’s goal.

Sagna lb Jenkins rb bfg and kos cb and tv5 Holden mid let Aretha push on a bit. We all know tv5 likes to bomb forward at least this way the defense is not left qs open to counter. Arteta knows to drop back if tv5 goes on a dash forward

The rate at which he seems to be making mistakes and getting bullied it wont be long before he gets labelled next senderos the senderos who started amazingly well but lost all confidence.
Vermaelen has to find that agression that confidence back which made him the verminator.
I dont hate him infact i cant he is one of few people i can say i share my birthday with.

Or Djourou… remember, at one point Djourou wasn’t bad. I sort of feel bad for Djourou, because I know being the brunt of fans’ rage must be hard to deal with. Come on, Verm — prove you have the mettle to be captain and get on with it.

Verm will bounce back soon and Kosh too but I am worried about the mistakes and the lack of “mental strenght” in Verm.

“He is a guy who is completely involved in the game,…”, thanks God it is not Santos who write this article.

No, thanks. I like the guy but take the armband away from him. Why Arteta is always the one who talks with the press? Shouting all over doesn’t mean captain qualities. Mik is natural leader and Tommy doesn’t need additional pressure now. Rest the boy for some games then unleash the Verminator again.

Agreed — Arteta has the right character and right qualities to be captain.

Agree with Pikkybiggy…TV5 is a very good player but AW should NEVER have given the armband to him. Arteta should have been made captain, with Mert as no.2. How many of us thought Gallas was a great choice for captain, and I mention this because we are lacking players with leadership material (Arteta being the exception). I personally believe we should sign Jagielka from Everton in order to try to usurp the other CBs to partner Mert. Back to captaincy, Vidic at MU and Kompany at MC are proof that the captain doesnt have to be English, but a natural… Read more »

I really wouldn’t mind sniping quite a few of Everton’s players.

Yet another reason why our once great manager has come to the end of his time here. Here is the worrying fact, the recent Arsenal of old (if that makes sense!) would bounce back very quickly after a bad result. Even if it was against a relatively easy team, we’d bounce back, get a 1-0 win and then more importantly, we’d get another couple to cement our position near the top. That has gone. The worry is those vital bounce back wins now become a mechanism for keeping us in touch with the ITV4 scum ridden Europa cup places and… Read more »

this team has suffered badly without diaby.