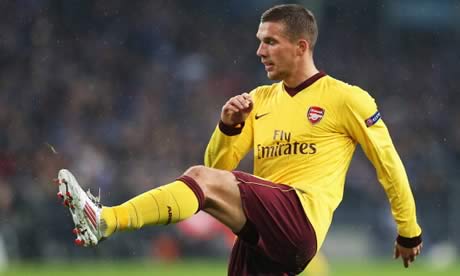 Back in his home country for last night’s 2-2 draw with Schalke, Lukas Podolski had no complaints about the result and was keen to highlight the qualities of the home side.

The German international provided the assist for Arsenal’s second goal, scored by Olivier Giroud, but says that the pressure we were put under in the second half, and the timing of their first goal, meant Schalke deserved a point.

“I think 2-2 is a fair result,” he said in the mixed zone after the game. “Schalke’s goal just before the break was something of a blow for us. They applied a lot of pressure in the second half, and that’s why I think both teams deserved a point.

“We’re still strong enough to get out of the group – that remains our objective. Schalke are a very, very good team. They work very well when they don’t have the ball, and have fantastic players going forward.”

Theo Walcott, scorer of Arsenal’s opener, was similarly pleased with a point, especially after suffering from illness before the game.

“I didn’t wake up great yesterday,” he revealed. “I didn’t have voice at all – it’s coming back a little bit today – but it’s just great to be back playing with the guys, and that’s all I want to do now.

“When you come to a difficult place to play a good team, who had beaten us at home, you’ve got to show character. We got the two early goals, though it’s a shame we couldn’t kill it off. But it’s a good point in the end.”

it was a patchy improvement on a nonperformance on saturday wasnt great defensivly, we were cut open countless times with one simple crossfield pass with neither podolski or vermaelen marking the recieving man.. he provided a good cross for the goal and his link up play improved but that still isnt the level of performance i expect from an arsenal player of indeed a seasoned german iinternational like him. He looks to be coming back to that early season form though.

Dear sir, i still beg to differ, I think he did well – especially defensively. Last schalke game he provided very little support to santos and our left side was open for farfan and their right back to exploit. This time he tracked back, provided cover, made some fine tackles (i do love them tackles, that’s my thing, you know) AND was decent up front (assist aside, there was a couple of crosses, and action after he got booked). All in all, i think it was a bit more than merely an improvement on a saturday. On top of that… Read more »

I think we basically agree here man, that he improved atleast, but can you honestly say he was up to arsenal scratch, particularly in the second half. I just dont want to get carried away with only a strong performance coz he still has a number of things to work on.

for a mid-table team like Arsenal. bring on joquim loew as soon as possible. thank you.

Nick
Reply to  GOONER FROM KENIA

If Wenger decides to leave Jurgen Klopp is a better choice to coach than Loew.

sorry mate if offended.was speaking my mind.I too love Arsenal

Nikki
Reply to  GOONER FROM KENIA

You bring a sensitive case on the manager change topic, but the worst thing is to judge us as a mid table team, just because as of right now our position is in mid table. That’s like throwing our achievement for this past 16 years away and that is criminal for me.

Well arsenal doesn’t love or need your type of “fan”, so fuck right off!!!

Poldi should be a CF or a second striker atleast and not a winger.

He plays on the wings at the German National Team. Problem?

Poldi himself prefers to play CF or central mid. Perhaps we would have fared better with Poldi up front instread of Gervinho. Poldi works hard for the team though, probably better than Arshavin would.

Thing is, Podolski won’t have a moan about it publicly. I hope Wenger picks the right players in their most effective positions and partnerships.

People pay far to much attention to starting line ups.

Poldi is playing ‘left sided forward’ he pushes in field alot allowing the overlapping left back space. The front three are also allowed freedom to interchange.

He is finding himself wide quite alot at the moment because Gibbs is injured, Verm isnt quick enough to overlap and Santos isn’t really performing.

If Walcott had passed the ball to Olivier at the last chance we could have won , but it is as it is and hopefully we can get our mojo back for the games ahead.

Also if Theo hadn’t been selfish while in the offside position and taken that bumbled through ball then Podolski (who was onside) could’ve had a very decent shot on goal.

Arsenal aside, isn’t it interesting that Mancini can storm the field and go after the ref when Citeh don’t win & Balotelli can do the same and yet neither will face any disciplinary action from UEFA? Why always Arsene?!?!?!

Arsene should have a suit made with “Why always me” emblazoned on it and wear it in European matches.

On a brighter note, Santi can do this:
http://ballsdot.wpengine.netdna-cdn.com/wp-content/uploads/2012/09/ibe9cry4sqdp85.gif