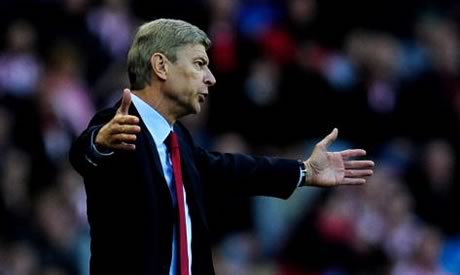 Arsene Wenger is unhappy that Jack Wilshere has been called into the England squad so soon after his return from injury, but says he’s found some understanding with boss Roy Hodgson over how the midfielder might be utilised.

The Arsenal manager was clearly vexed at Wilshere’s inclusion, hitting out at the press for their influence and suggesting that his suspension from tomorrow’s game against Fulham was a key factor, but was sanguine in the end having spoken at length with Hodgson who is keen to have one of the country’s most talented midfielders back in his squad.

“I wouldn’t like to come out on my feelings because at the moment they are not very positive. I saw it coming, that’s all I can say. Anyway, I have no choice. I have good relations with Roy Hodgson.

“We spoke about the situation, he knows my feeling and I know his feeling. You know that I think it is early for Jack. We found a good understanding and a good compromise. Roy wants him in the group to connect with the players.”

The boss also hit out at the decision to hold a round of international friendlies in November when national sides don’t meet again until 2013, having already had a number of tedious Interlulls to contend with.

You don’t know how the November friendlies can prepare you for a game in February,” he said. “There are a lot of politics behind these games. When you see some teams travelling, you think: ‘Is it more to pay back some corporation than prepare a team for the next official game?’

“The problem is not to have too much conflict with the interest of the clubs. But when we play next Saturday at 12.45pm against Tottenham and Cazorla plays for Spain in Panama on Wednesday night, you cannot say there is no conflict of interest between the two. It is also difficult to understand why these games are not like the official games and played on a Tuesday night.”

All very sensible and as usual Arseblog News is drawn back to the same, familiar conclusion that international friendlies are just money spinners for the national associations and a waste of everybody’s time.

Fucking Panama! That is a joke. Panama? How far is that? that must be in Northumerland!

Panama is in central America mi amigo – even further away than Northumerland I suspect.

Bullshit. Nothing is farther away than Northumberland. Except for John Terry’s genotype.
Oh, and Panama is certainly not central america. Colorado is.

Oh, thank you for clarifying!!
(Did you ever get a joke without a explanatory diagram attached?)

Great joke “Panama is certainly not central america. Colorado is”. Top line was a joke, the remainder ignorance. Perhaps youre from the USA, which would explain why you didnt realise that the Americas strectch down to Tierra del Fuego in South America. Glad to clear it up for you though

Jesus, can people really not detect sarcasm / faux ignorance? Or has the internet lowered all expectations so that everything not followed by *ba-doom-tsh* or LOL is instantly suspected of mind-bending ignorance.
Fucking hell. Phillipe Auclair’s echo chamber still functioning, then.

Mills N7, enlighten us, where in
“Oh, and Panama is certainly not central america. Colorado is.” is there sarcasm / faux ignorance?
Because if I am missing something here I fully apologise for my ignorance

Tom J, Go onto wikipedia, look up “Malapropism”. It is a form of comedy named after a character (Mrs. Malaprop) in Sheridan’s play “The Rivals”. It is getting something deliberately wrong for comic effect. In this particular instance, it plays on the well-known stereotype that “everyone from the USA is geographically ignorant”.

Just because you don’t find it funny doesn’t mean that it is not meant as a joke.

thank you Mills, I gave up on explaining such a simple and unsophisticated joke. It’s nice to be understood rather than judged and looked down on by a certified genius.

And besides, can it be called a stereotype when only 3% of them have passports and it is a truism that the majority know nothing other than what they are told is whats happening in the USA. War mongers

To be honest I think carzola would be better from the bench v the spuds. So it could be a blessing in disguise.arteta and AW should get his coc out .let Jack play his number ten role. A hard working 3 in mid.

I’m smarter than all of you. There I win.

If he’s going to come in after 70 minutes when Engerlund are somehow 1-0 up then please dont bring him on. Ibrahimovic will be pissed to the core/nose and will now be hunting for prey, he’s fond of outragreous kung fu kicks, he might do it at the defence but i’m afraid it might somehow connect with Wilsheres’ chin all the way in midfield. All in all fuck them internationals!

I wonder if they will play Van Halen at halftime….in Panama of course.

Is it just me or have Spain being playing friendlies in the most pointless of places of late?

I watched the 90 minutes on TV, Maribor should have had a few more goals, Lloris was a bit shit, Bale is a hateful cunt. The commentator said he has recently become a father and all I could picture is a little monkey boy

He could be my lad!

Lol @mooro did you google their striker as well.. who left arsenal in the name of ambition and ended up with the team who always finished below them in league.

Los Polandos
Reply to  A N Other

Can’t be googled. It gets autocorrected to Adebawhore.

Mooro
Reply to  A N Other

Yes mate. Came up with Clive Allen and his fat fuckin face.

St Totts Day – the gift that keeps on giving. Year in. Year Out.

Panama, isnt that like South America. Cazorla will prob not start for spain anyway…….just think of all the rest he’ll get on the plane : )
Although, as arsenal players luck goes, DVT might kick in……NOOOOOOOOO!

Cazrola really look like he could do with a rest

Agree with you there bud. Why not rest him and play Arshavin in a free role behind a striker. Its where he should have always played for Arsenal anyway

hey just because thats his favored role, where he played all his pre Arsenal career, and where he is most effective, doesn’t mean Wenger will actually ever put him there..

I’ve said it before and I’ll say it again: it’s time to ban international football during the club season. Why can’t we just have a club season which runs from September to May, a six-week international season between June and July, and a month-long break in August? (Players would go in holiday in the second two weeks of July.) With this calendar there would be no conflict between club and country. During each International Season the countries would play either a tournament or the group qualifying matches for the next year’s tournament. And there would even be enough time for… Read more »

Isn’t Squillaci only going to Panama to watch Spain?

the bit you are forgetting is the summer transfer window

[…] that the England call up is a big boost for his confidence, Arsene Wenger has however revealed that he has had a ‘good compromise’ with England manager Roy Hodgson, another cuddly bear, over the use of Wilshere in the […]