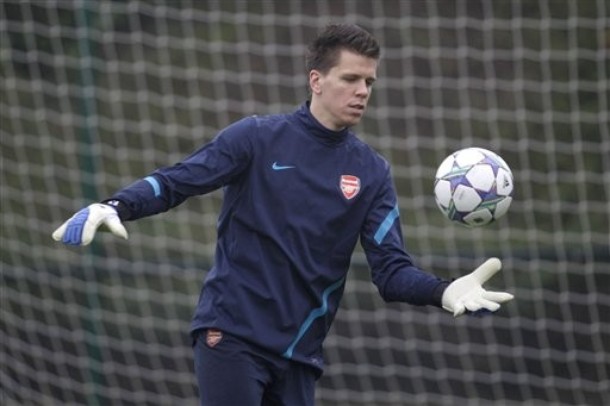 Wojciech Szczesny will play for Arsenal’s under-21s tomorrow and could still be added to the first team squad on Saturday should he come through the clash unscathed.

The Polish international has not featured for the Gunners since the 6-1 victory over Southampton back in August; a game in which he dropped a clanger after injuring his ankle in the warm-up.

Speaking this afternoon at Great Ormond Street Hospital where The Arsenal Foundation has funded the opening of a new Lung Function Unit, Arsene Wenger confirmed the stopper would feature against West Ham at London Colney tomorrow at 1pm.

In all likelihood Vito Mannone will retain his starting berth for Fulham’s visit this weekend, but it’s good that our number one is on the mend.

The boss also revealed that both Alex Oxlade-Chamberlain and Aaron Ramsey could return from injury, with both set for fitness tests tomorrow. Given Jack Wilshere is suspended, the added midfield options will certainly come as a relief.

I’m not quite as elated as I might have been a couple weeks ago, but I still think that Szczesny is the best option we have at the moment and more than deserves to be Arsenal’s No. 1. Good to hear he’s out of “two to three weeks” territory, though.

That twothreeweeks territory is a confusing place. Maybe we can ask Chesney if he’s seen Diaby in there, just to help him find his way out.

Remember the invincibles. Because we aren't good anymore
Reply to  Charlie

think we should give Mannone another game. Remember the errors SZCZ made in his first game back?

austingooner
Reply to  Remember the invincibles. Because we aren't good anymore

Agreed — bad idea to come back before he’s ready. No need to take a chance on getting injured again or not being quite up to snuff when we Mannone’s holding his own.

JayO
Reply to  Remember the invincibles. Because we aren't good anymore

Just thumbed you down for your name… It hurts 🙁

Chesney is number one – no doubt. But I think Don Vito has done us a tremendous favor by making sure we have a reliable number 2 if needed and helping our number 1 push himself to his best.

It’s been a rocky ride since Jens and we’re not completely out of the woods yet, but at least it’s not our number one problem anymore.

wait – that wasn’t a joke… don’t worry, I still think its funny

Martin Keown is my hero
Reply to  ontheup

When I read “Szczesny has a chance for Fulham” I thought that he was about to sign for the Cottagers. Wouldn’t be a surprise – we only sell or best players.

I don’t even know how to reply to this

How do you survive with so much negativity?

At times like these, when our club has been run by a senile lunatic, when things have turned so bad that it’s almost funny, it’s hard to stay positive.

Fats, I normally appreciate your points, but this is a rather stupid post which also includes a spelling error.

i think he likes the attention

Why would that sentence make you think that? ‘Fulham have a chance with Szczesny’ maybe but the way it’s worded just mean you have lost it this time

Anyone else feel sorry for Vito? He has done pretty well in my opinion.

diefenbaker
Reply to  Pride of London

vito shouldnt be dropped, chesney could do with the competition.

I agree. Mannone’s been solid, and why rush Szsz when he’s obviously dealing with some crazy injuries?

Every position in our squad is strong, and with quality, but the players can sometimes be inconsistent…:

Also, thumbs up if you agree with the team sheet or if you’re happy that Celtic beat Barça 2-1…!

Respectable perspective, i do think we have a strong second team. I disagree with your front four, it’s not as simple to label them to those positions, in my opinion. Someone like Pod holds the striker role better than Gervinho in my opinion, from what i saw at Cologne etc. Also, Ox can handle either wing, and I’m confident he’d be just as good in the middle too. Same with Wilshere. Also, Walcott has shown lately he can handle runs down the middle – is it simple to confine him to the right still? For some reason, Theo doesn’t believe… Read more »

I dont really feel that much peturbed by this, Mannone has not given me anything to worry about, quite the contrary, he’s been magnificient for a third choice. I believe everyone in the squad should be given oportunities to prove themselves and Mannone did just that…..quite excellently!!!. But if Schezzers comes back in then that would definetly be a Selection solution coz he’s top aswell, i would welcome that but not as much as I would a ~GIBBS!!! Comeback. When is he getting.back?,um is he okay now?, I want him now!

On the earlier article poldi said he wants to plat more centrally. So he’s basically asking to be put on the bench, and come on for giroud at the late stages of the game. Move chambo to the left and let him alternate btwn him and gervinho/arshavin. Poldi will then be alternating with giroud. He’ll not get as much game time as he would have liked but atleast he’ll be playing in his preffered position!. So i dont wanna see him raise issues about that when it happens. (a change in formation could incorporate the two as CF’s but i… Read more »

Stick with Mannone…..he saved our ass in Schalke!

And minimized what could have been a far worse loss to Man U. Mannone’s one of our most consistent players this season!

Now where is Diaby and Rosicky?!

Shez is the last of my injury concerns to be honest. Its heartwarming to see the effort and fight from our young italian stopper. He’s not the most talented/athletic/flexible keeper in the league, but I like the look in his eyes in the tunnel before kick-off.. Now tell me something about Gibbsy because our left-back situation gives me coldsweats just by thinking about it

Stick with Vito until he gives the boss a reason to leave him out.

SCZC could do with a bit of humility…..all that talk pre-Euros and he goes and fucks it up. Let him sweat it a bit. We are always talking about how competition is good for the squad. If SCZC walks straight back into the team, after Vito has done well, that is NOT competition.

Manone has improved leaps and bounds in last 2 games but he did make many mistakes like Norwich, Chelsea, Man C game etc.. It’s wasn’t too long ago that it could be easy forgotten and justify his place ahead of sczheny who made only one or 2 mistakes whole of last season..

Martin Keown is my hero
Reply to  A N Other

And now he’s settling down it would be a shame to drop him.

austingooner
Reply to  A N Other

Many mistakes? I don’t know what you’re referring to. Most of the goals that went in during the games you mentioned would have been incredibly difficult to save, especially in the cases where our defenders completely let us down with horrible mistakes of their own.

(And he made so many great saves during those games, despite poor defending down the left.)

Let’s keep it simple: Szczesny is our no. 1,so he will take his spot between the bars when he is fit,Mannone has done well and deserves credit for it but he can only be a second choice until Szczesny does something real stupid after getting back.I will pick Szczesny ahead of Mannone any time without thinking twice.

Don Vito has done a good job deputizing and I have no problem with him being the Arsenal #2 and hopefully he’s put some pressure on Shez now to keep full concentration because if he doesn’t, Don Vito can slide into his position. I hope that this will stop any complacency that Shez was showing signs of at the end of the season and the Euros. Saying that, the Don must start against Fulham as I believe his debut game for us was against them and he had a great game. The Don will have some full circle. I think… Read more »

[…] with some injury updates ahead of tomorrow’s game against Fulham and there’s some vaguely good news. Wojciech […]

[…] with some injury updates ahead of tomorrow’s game against Fulham and there’s some vaguely good news. Wojciech […]