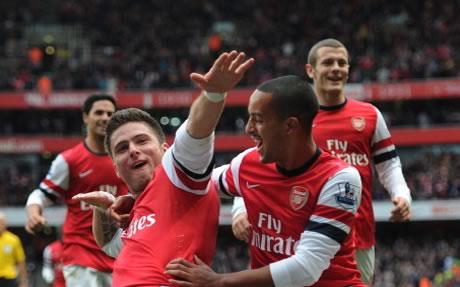 Arsene Wenger has revealed that Olivier Giroud will miss Arsenal’s Capital One Cup quarter-final with Bradford tomorrow night, but says the fact that the club don’t play again until next Monday means he can take a strong squad up north.

Giroud picked up a back problem in the first half of Saturday’s 2-0 win over West Brom and will be given time to recover before the trip to Reading next week. There’s still no place for Theo Walcott while Laurent Koscielny and Andre Santos remain sidelined.

“We will have an experience squad at Bradford,” said Wenger. “We have a good recovery time ahead of the game at Reading on Monday. So we can use the players we want to use.”

Vito Mannone has recovered from an unspecified injury and returns to the squad, but youngsters who would be expected to take part like Nico Yennaris and Ignasi Miquel miss out through injury.

It’s likely the manager will bring some of the younger generation to boost the squad as it’s a competition in which Arsenal are renowned for giving players a chance in, but after the remarkable, and frankly, bonkers game in the last round, it seems Wenger is determined not to take too many chances.

Should have taken him off after he got that kick early on Sat but no, let’s play him till he gets injured properly later on. Wonderful.

For what? Telling the truth?

It’s obviously for being a complete tool.

There’s no guarantee that pulling him out of the game immediately after the knee to the back would have prevented his omission from the Bradford match.

Injured properly? Please bitch… Fucking pessimists.. Try to be happy for once it will be a good opportunity for him to score some goals and it will give him better confidence.

hahaha dont blame wenger you fool. He cant know how much pain the player is feeling at the time? he goes on their own judgement, if giroud said he was right to continue, then wenger would take his word for it.

at 1-0 up, off course giroud wanted to continue playing.

It’s the physios job too know if a player is badly injured. Anyway it’s only Bradford and wenger probably feels eisfeld and akpom will bag a handful 😉

I just want to win this competition to stop all the cunts going on about 8 years and counting, please do whatever it takes

Would be great to win it, but I don’t think it’s going to stop anyone from going on about all the other things we’re not winning. We can all have our own motivations, of course, but I’ve given up on pleasing those “fans”

It’ll stop the guys I work with bringing the subject up all the time.
The spuds supporters go on and on about it!

If we win the Capital One Cup, the tune will change to, “Arsenal haven’t won a serious trophy in 8 seasons.”

My theory is, I think it will be more like “Arsenal have only won one trophy in 8 years”.

With that said, it would be really special to see these players lift a trophy other than the Emirates cup.

I’m sure we’ll all rather it be 1 trophy in 8 years than none!
But let’s take it 1 game at a time, we’ve been here before & much further, lets hope Our luck changes! I mean it has to sometime & it’s about fucking time.

I went to the Emirates Cup a couple of years ago ad they didn’t even win that. I got very drunk after that.

But very few teams have won a serious trophy in the last 15 years.

Smell something? Its silverware. COYG!

I hope eisfeld gets a chance..he deserves a chance

He was immense against Reading, really Rosicky-esque, full of power and drive. Hope he gets a chance from the start now.

Speaking if which, would love to see Rosicky and Eisfeld play together.

I remember he once said Rosicky was his idol. Mine too 🙂

And which other forward would have taken his place? It was a hit to the back. It wasn’t a knee ffs

@abhijith, he isn’t injured, just precautions, anyway, had he be taken of early we would have missed that ” what what what ” moment. ….. That badass attitude

Even i am confused how do you pronounce Gnabry.
Is it ga-nabry or just nabry. Heard calling nabry from fans and ga-nabry from commentators not just espn(useless cunts) but on from arsenal tv as well.
So what is it? i will just call Serge for now.

His name’s French, so the G is silent.

Mark the spark
Reply to  Comedian

Would be great to see the 4 Deutschlanders interlinking 😉

I agree, apart from podolski who wasn’t available for game at the weekend. Gervinho should start, he should tear Bradford apart and he’s off to the ACON’s soon so we don’t have to worry about faitgue as much

Gerv also needs a few games to get his touch up to an acceptable level.

Good to know that we want to take this cup serious. Cos truth be told its our best if not only chance at ending the ‘famed’ drought.
I literarily laughes out loud at “Vito Mannone’s unspecified injury”

Be careful not to laugh out loud too strongly. It’s been known to cause unspecified injuries.

Come on, let’s win this thing.

I don’t think Rosicky will be ready to play a full game yet (neither will Wenger push him).

Would like to see Coquelin given a chance, like him a lot, play him possibly alongside Rambo with an attacking trio of Gnabry/Rosicky/Eisfeld and would like to see Lukas get a chance at ST, reckon he can do some damage

time to fire the young canons…nuke the COC
COYG!!

This has got to be our chance to get a trophy albeit AW 4th choice.

So very sorry that a chinless City player is getting masses of abuse for hiding behind a defensive wall because he is scared of the ball hurting him .

The contribution of the left back with the dodgy hairdo seems to have been overlooked by the commentators.

Mark the spark
Reply to  Joeos

We really need to take this cup serious this season. Arsene’s ” top 4 considered a trophy” is gonna be a top 3 spot soon with the performance of english clubs in champions league

You poor fool. You read a newspaper and believed what it said.

It does happen Germany increased to four teams. Italy reduced to three through regular poor performing in the champions league.

English teams can suck for a while yet before that happens.

Don`t you guys worry. EPL will keep the top 4 spots since it’ll be 2 years in a row that a London team will lift the champions league trophy. Believe it my brothers!

So do we move the forehead who can’t hit the target or the lizzard with the dodgy haircut up front?

Wining the league cup with those two Charlie Nicholas goals was the start of GG golden patch. It could do the same for us now.

It’s a shame he’s out, we need his headed goals.
I expect nothing special from his feet!

We want a good strong team for the match and with reading to come we have the base for a good consistant winning run. Like to see Poldi up front and a run out for Gnabry and Eisfeld.

Wenger should start with a strong eleven tomorrow. If we are well ahead at half-time then he can take off a couple of players and rest them.

This is a great opportunity to win a trophy. With only Chelsea, who look quite beatable, left as serious opposition we should go all out to take this cup.

If we don’t see off Bradford then we might as well give up.

Lol just sitting here reminiscing how Mert threw a tantrum on saturday after sliding in for the ball.

I hope the boss can show the faith in Arshavin cause his performances thus far have been encouraging, however I expect either Rambo or Gerv getting the nod instead…? Either way here’s hoping the lads play well and we get a great result heading into the Christmas… Oh to Be a Gooner!!!

Without such an aesthetically-pleasing man, I’m afraid we may struggle to penetrate Bradford in their rear.

dont want rambo nowhere near. give eisfeld his chance to show he should be in the first team squad. Id like to gnabry and more of Akpom in this game. but above all i want us to win, and win in style. clean sheet would be good too

As if when giroud plays we are invibcible

[…] that our next league game is (annoyingly) not until next Monday, the manager is going to bring a fairly strong squad to Valley Parade. The extra couple of days to recover means that he can use some players he might not have […]

[…] that our next league game is (annoyingly) not until next Monday, the manager is going to bring a fairly strong squad to Valley Parade. The extra couple of days to recover means that he can use some players he might not have […]

Good to see everyone backing Eisfeld and Gnabry. With Walcott/the club playing silly buggers (meh) it’s maybe a good chance to get Gnabry on during premiership matches. Haven’t seen enough of him yet but there is a lot of positive stuff being said. Eisfeld is a class act and cup games he should be starting because now rosicky is back now aswell, its near impossible do him to taste 1st team action this season. Gnabry has a chance down the right if Walcott and gervinho (defo a cross between Predator and Whoopie Goldberg) keep playing poo. Looking forward to tonight… Read more »

Gervinho needs his early-season confidence back. Bradford is a perfect opportunity. He should start, play and score.

serge gnabry, such a wonderful name for me!

maybe someday i’ll use that name for ma son.