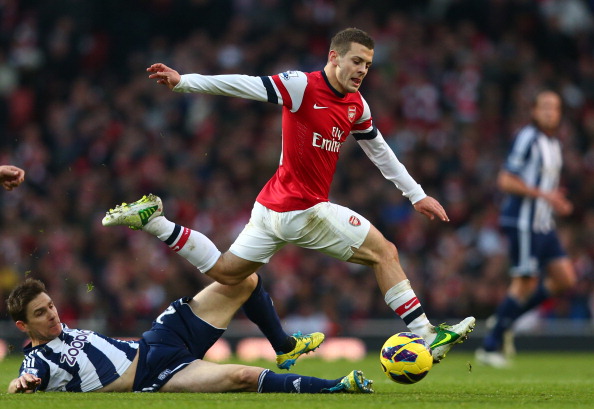 Arsene Wenger believes that Jack Wilshere is close to reaching his best form, while the young midfielder has taken time to lavish praise on his midfield cohorts.

The England international was pivotal to Arsenal’s 2-0 win over West Bromwich Albion on Saturday producing his most swashbuckling display since returning from his lengthy spell on the sidelines.

Speaking after the 2-0 victory, the boss not only hailed Wilshere’s performance on the pitch but also his attitude in training.

“I have still to be cautious but Saturday was the first time I have seen him very, very close to the player he is. Yes [we’ve got] our young old Jack back.

“He analyses well his game and is very demanding with himself,” Wenger continued. “He works hard in training, he is a worker.

“He’s an enthusiastic player – he goes for the challenges the day before a game. I don’t hold him back because I think it is good to have that attitude. When the best players have that attitude, you have always a chance.

Having run the show against West Bromwich Albion on Saturday the 20-year-old also took time after the game to analyse the blossoming partnership between himself, Mikel Arteta and Santi Cazorla.

“Mikel’s great,” he told Arsenal.com. “Tactically his positioning is probably the best around.

“He’s an older player, so he’s great for the younger players to talk to on and off the pitch.

“I speak to him during the game. I say ‘Mikel if you want to go forward, I can sit.’ It’s quite a good understanding.  He knows I want to get forward and try and get on the scoresheet. He’s the same. At Everton, he was our most attacking midfielder. I think it’s a bit of both. But I think he lets me go [forward] a bit more than he does.

“With Santi in front of us, and me and Mikel getting forward, I think it can really blossom over the next few months.”

No! We stick to our traditions and give him a new contract when he is in the final year of his current contract.

I think its said they began on it a month ago.

He’s a top lad, he would make a fantastic future captain!

Jack’s back and that’s that!!! Two or three decent additions in the window and the season could still be a good one! COYG

Cheers to blogs for the link. Brings a tear to your eye when you see what those three are capable of.

You really feel this midfield three has massive potential. Can’t wait to see it at it’s best

Jack is like hybrid of Arteta and Cazorla,now if only we can get one of Giroud and Pires that would be so dreamy.

We`d get Pires height and Giroud skill. And of course, a pretty boy for the pathetic gay boys writing here to enjoy 🙂

Jack is just a different England lad unlike anyone I have ever seen. I mean he has so much flair about his plau….and when tallking about flair, you never see that in the same sentence with “england”.

Bergkamp no.10 jersey couldn’t have found a better suitor.

We need to tie jack down…to a new longer contract. But we also need to build the team around him. We need other world class talent around him. Please buy well Arsene, and shify the deadwood

No more building teams around players! It doesnt work well if there’s injuries or leavers. Instead, each players strength should be utilised appropriately for TEAM strategy.

jack is just a younger version of iniesta(IMO)……..the dude can twist and turn @360°

He’s going to be, if not already, better than Iniesta and Xavi (as shown in the games against Barcelona when he was even younger)

He can twist and turn. but can he bewitch? http://www.youtube.com/watch?v=IUYrj8-TogA

No one can reach Iniesta, with the exception of our number 19, get over it.

I’ll see your Iniesta and I’ll raise you a Wilshere http://youtu.be/mvH8qzr_hhM

To a certain extent Mikkey, but would Iniesta be able to shrug people off the ball when carrying it past your average Prem midfield? They are different players with an overlap when it comes to ridiculously technical dribbling, Wilshere’s power and drive would count for less in Spain and Iniesta’s sheer lack of physicality would hurt him over here.

Thing is though, Wilshere *could* be better than the majority of players today and that includes Iniesta imo (hilariously ridiculous as some of the things he does can be) but he’s not there yet.

iniesta could not do those skills often in english prem, thats for sure

It just shows how long it takes for a player to become ‘up to speed’ with the game after a long injury (and that’s Wenger saying Jack’s two months ahead of where he thought he would be).
It also shows just how many minutes it takes for even good players to find an understanding in attack. It doesn’t happen overnight. Hopefully now the three of them can push on and start to win games on their own.

I love that Jack will offer forward opportunities to Arteta. Shared responsibilities. Love it!

Great teamwork is growing in the middle, and with that juicy inter-play (as the .gif shows) and the growing fitness of Wilshere… I’m not sure how much longer i will desire a Diaby/Yaya/Fellaini-like player in our midfield…

Do you guy think in the long term it will matter?

It will depending on if Coquelin does the maximum with his potential. I only say this as Arteta will eventually age and his hair will start to go a little grey (Not too much as he has seems to have the darkest hair I’ve ever seen on a 30 year old). This partnership can blossom for a good few years, then Coquelin, Wilshere and Cazorla and then Coquelin, Whilshere and ? (Maybe Ramsey if he can sort his confidence out and we don’t lose anyone through injury or transfer or one of the up and coming youth prospects Olsson or… Read more »

Coquelin, Wilshere and The Ox? 😀

I don’t know why but I always see Eisfeld eventually becoming as a wider midfielder. Allowing him to drift inwards and dictate attacking moves that way.

The Ox is a good shout, as he does have that drive but then would it be a case of Wilshere and Chamberlain being too similar. Maybe our style of play needs that injection of direct running from 2 players rather than 1 box-to-box midfielder.

Yeah we still need a Diaby/Yaya/Fellaini type player, you see Wilshere’s traditional role is behind the striker as the no 10.

He’s a great all-rounder in the midfield, he could pretty much be put anywhere and do very well. I find that it’s something that suits Arsenal’s style – players in the midfield that can move anywhere in the field. Seems to me like the field can do with playmaking midfielders – strong, forward passing defensive players that know when is the right time to move forward. I feel like there’s only a handful out there that can do that. If I’m honest though, if I had a WISHLIST choice, it would be Arturo Vidal to join the midfield… excellent defensively,… Read more »

Does anyone know when the current contract expires? I seem to remember we signed him up to 2015 around 18 months ago

Future Cpt. Jack. I love those pictures of him having a go at blokes twice his size. Remember when we played Barcelona and Abidal clattered him heavily? Jack just dusted himself off and got straight back into it. Awesome to have players with that desire and motivation in our squad who haven’t shyed from the fact they want to stay with the club long term. More of these please Mr. Wenger!

Anyone remember that amazing goal he scored for the reserves?

So how much do we offer him, whats going to stop him doing what everyone else has done, why cant Arsenal put in ridiculous buy out clauses in contracts to at least protect our interests. We have seen it all before, very few badge kissing footballers are genuinely 100% loyal, will Jack be tempted by £250k per week

Still think we can buy a def-mid.. Strong 1.. Play santi on the left jack and arteta in the mid with a def-mid behind them.. And a top class right winger.. Other teams play with a FALSE wing on the left.. Gibbs just needs to offer that width more.. That way we can get the best out of our trio.. Just a thought.. Just a thought

cut this shit mate. its useless speculating what Jack would do in future. just enjoy what we have now and keep the hope.

You ain’t seen nothing yet. ARTETA-WILSHERE-CAZORLA will be the crispiest in the league, and one of the best in Europe.

“just” enjoying what we have now and not thinking long-term with regards our best players contracts has gotten us in the position we’re in now. Of course we need to enjoy our players while they’re at their best for us, but we also need to be forward thinking and find a way to stop the megabucks teams of Europe cherry-picking our best men.

Not for us, it hasn’t. What we do has no impact on who is recruited so we should enjoy things, whilst remembering that every footballer in existence thinks about the money first.

Unless you’re Gazidis, in which case gtfo and start negotiating some player deals

I defo prefer frimpong to coq…

and you also think squillaci is king…nuff said. while i like frimpongs aggression and rough style in defence, he can be a liability as far as yellow and red cards go, as a back up he’s more suited in my opinion, behind le coq..

Firstly, sebastian squillaci is the greatest centre back the world has ever seen (closely followed by silvestre…)and secondly, the frimpsters had hardly any time to develop and improve with the first team due to his injuries. Imo hes better mainly because he’s DENCH and he’s arsenal through, just like lansbury 🙁 …

Just heard on my local radio station that its apparently official that king Henry14 is back.. Need confirmaton???

In the future… jack, rambo, dench and the ox.

Gooner
Reply to  squillaci is king

Coquelin, Ramsey and Wilshere looks like a good one for the future.