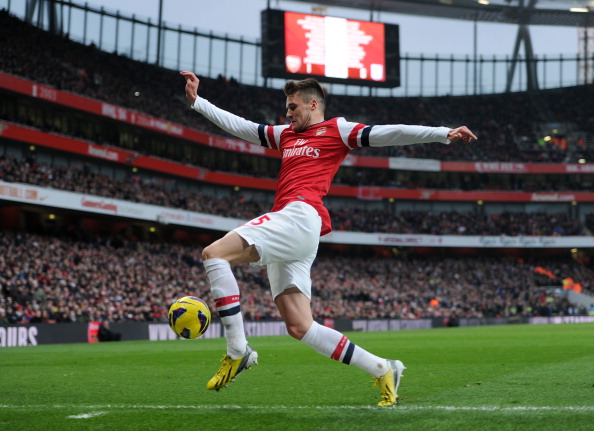 Returning to the starting line-up following his red card at Sunderland, the right-back put in an energetic shift in place of the injured Bacary Sagna before celebrating Santi Cazorla’s winner from the bench like the full-time Gooner that he is.

Speaking after the game, the 21-year-old admitted that he was worried his teammates might run out of time before stressing the importance of securing three points as the chase for a Champions League place hots up.

“We haven’t had the rub of the green of late, and when we went to 80 minutes at 1-1 I did fear we wouldn’t get that goal,” Jenkinson told Arsenal Player.

“The way we were playing and the [number of] chances we created, it would have been criminal if we didn’t win the game but football doesn’t always go the way it should. But we got the goal we deserved and I am delighted with it.

“In the league our form has been good, but other results haven’t been what we wanted. Sometimes that happens in football and we had to react.

“We are going into a huge game next Sunday and it is nice to get a good result going into that. Hopefully it will give us the belief and confidence we need to go there and win.

“You want to play in all the big games and it doesn’t get much bigger than playing Spurs. I just hope we can go there and play the way we can play and get the result I know we are capable of.”

One of the reasons Arsenal can take confidence ahead of a showdown with the Spuds on Sunday is the form of Santi Cazorla. Having bagged the winner a couple of weeks ago at the Stadium of Light the little Spaniard’s brace versus Villa took him to 11 goals for the season, making him joint top scorer with Theo Walcott in the league.

Reflecting on the midfielder’s impressive first season Per Mertesacker lavished praise on his pint-size teammate.

“You see he takes his chances with his technique and his feeling,” the BFG told Arsenal Player.

“He is the perfect footballer. He has the technique to score goals and that’s what we need after losing the last two home games.”

Turning attention to beating Spurs again, the German continued, “The last two home games against Tottenham were absolutely fantastic. We try to keep that in our mind and want to achieve the same things, to score goals.

“If we play our game properly, we can compete with every team in the Premier League. That’s what we need next Sunday.”

I was hoping for a few this evening in their match vs West Ham. I think their bench was very weak and with Europe, they’ll struggle during the run in.

We need Adebayor fit. He really doesn’t seem to give a fiddlers about how Spurs fare. An injury to Bale or Dembele would do just fine though 🙂

Gunner From Another Mother
Reply to  mike

Adebayor did his best to help us when playing West Ham as he missed a point blank follow up header. Too bad that chimp bastard was afforded space to shoot from range and saved their lilly-white behinds…

All this is meaningless as long as HE is at the helm. The board must get ruthless and sack him. On a Tuesday morning could be a good time.

“He”? You mean the manager who has brought us through a period of success in the club, unknown certainly in my lifetime, and who are currently just one point behind a team who think they are Premiership winning world beaters, with “the new Messi” in their team (albeit, a Messi with a monkey’s head that makes the same stupid gesture with his hands – or maybe they’re his feet, its hard to tell with monkeys) every time a camera points at his weird chimpy face. Take a step back eh? Lets see how it pans out first before we start… Read more »

Sorry, meant to say – thats a great picture of Jenks. I love that guy.

Love Jenkinson. Sprints up and down the field like an express train and he’s sound defensively as well.

*ahead cos of head-to-head result

What Jenkinson said was 100% right!! Fact ! out of the last 6 league games we have won 4 and drawn two !! Fact And now we are just 2 points off chelski and a point of the Spuds !! Fact Even if people thinks it is as good as over for us in the Champions league we are still in it ! Fact Man City and Chelski did not even get passed the qualifying rounds of the champions league and then are not in the champions league !! Fact City with their Millions are what 12 points of UTD… Read more »

Nicely said carl. Too much negativity, not enough support. Our main role as “Supporters” !

Gunner From Another Mother
Reply to  carl

Reading this got me pumped up!!!

It’s so hard to read all the negative press against Arsene and of course Arsenal!! I personally think it’s controlled by the big clubs Directors scared that if Arsenal were to Actually win the league or champions league with youth players and not Big money Signings other owners would question their directors and managers why they cant do it !! and the Money Bubble would burst !! seems to me football has changed for the worse when its all about the money no about the football club and fans !!

Anyone else irked by the fact the other players are expressionless while Carl celebrates?

I wish we could start sagna instead of per-shit!

Great to see Jenks celebrating, shame the others aren’t though! I’d like to see the whole bench celebrating and showing that team spirit that is going to be vital if we’re to finish in the top four. Chaberlain, Koscielny and Gervhino look like aren’t bothered in the slightest, don’t like that at all!

Well that hasn’t worked at all.