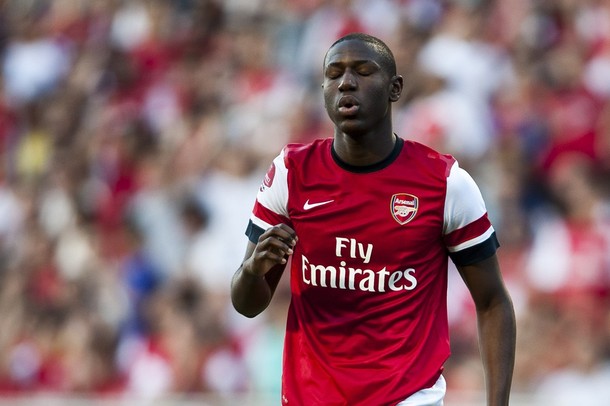 The Arsenal Academy graduate has only just moved to Millwall on loan, having spent the first half of the season at Bolton, but will now return to North London where he could be facing up to nine months of rehabilitation.

Millwall manager Kenny Jackett confirmed news of the injury to Lions blog NewsatDen.co.uk after the player was forced off after 12 minutes on Tuesday against Wolves.

“The scan showed cruciate ligament damage and it looks as though he will be ruled out for the rest of this season and part of next season as well. It’s very serious for him.

“He was on crutches the next day and had a scan straight away. He is a young guy, he will get over it and come back stronger. He’s at the right age to be able to overcome this problem.

“Although it will take some time, he will overcome it and come through.”

It’s not the first time the 20-year-old has seen his career stopped in its tracks. The England under-21 international spent over six months out with a groin problem in 2011.

Arseblog News wishes Benik all the best with his recovery.

Think that’ll probably be that for his career with us, then. Shame, they all thought he would be the next big thing not so long ago.

Not really, Wilshere was able to come bacl. As the Millwall manager said, he is at the right age to make a full recovery, given a bit of luck and a lot of work.

Wilshere was in the first team when he got his injury though. To an extent, he had proven that he’d be a massive player for us. Afobe hasn’t done any of that for Arsenal so he’s up against it to make it at the club. Plus there are other strikers like Akpom coming through who will overtake him in the race for the first team while Benik’s on the treatment table. It’s very sad because, in the few bits I saw of him in the Youth Cup a while back and in pre season friendlies, I thought he had a… Read more »

Hope you’re right, but sadly I think he was at a tipping point in his career and needed as many games as possible to raise his game to our level. Now it doesn’t look like he’ll have the opportunity to develop into a player good enough for us. Wish him all the best.

You’re probably right. It will probably go much the same way as happened with Henderson and Frimpong who had similar injuries as they were on the cusp of breaking through.

It’s a crying shame to see these players at there age suffer injuries. At Arsenal we have had are fair share and all we can do is hope that it doesn’t have and impact on their ability and future at the club. Unfortunately injuries at this time in your career can be detrimental.

Think that’ll be it for Afobe. Seems a real decent lad with a good head on his shoulders but two lengthy injuries before 21? No thanks. Hasn’t been that prolific since making step up to competitive football either

It’s a sad reality that this is nearly the worst time for a young player to get these kind of injuries. The irony is that being so young he’ll make a full recovery but he’s also losing out on a vital era of his footballing education.

I really like Afobe and have always had high hopes for him, but this latest setback makes you wonder. And with the way people at the club are talking about Chuba Akpom, the signs are there…

Ohh damn that’s dreadful news for him. Just when he was seemingly getting back on his feet after previous injuries and not having much game time at Bolton. Absolutely gutting for the lad, it might well be the deathknell for him at Arsenal, he’s getting towards that point in his career after a few loan spells that its either step up or move on time. Such a shame, people were pretty excited about him 2 or 3 seasons back but this might be one set-back too many.

This is a shame,

a few years back he turned down a contract from barca, had a good loan at hudd’s, we shouldnt have let him go on loan to bolton into the championship, he should have gone to a prem team on loan, he didnt get the playing time and the quality of football is lower.

Real shame, hope he can carve out a career for us but with akpom, it seems hard. Hope he doesnt think what if with the barca contract.

Football can be cruel

Whilst he is young and able to overcome an injury of this scale, part of me does wonder one thing; Is he our next Diaby? Diaby, much like Afobe is now, was a player we all saw great hope for in his younger days. Sadly, injury upon injury has set back his development and limited his first time chances (no matter how much faith fans/Wenger put in him). For my money, it is only a matter of time before the club realise we cannot keep relying on Abou – a player who has plenty of skill BUT we never quite… Read more »

The difference though is that Diaby had his ankle demolished and that’s where all his injuries stem from. The rest of his body is essentially trying to compensate for his ankle so he picks up all sorts of injuries because of that. Unless Afobe suffers a bad break, he won’t end up like that.
I think he will get back to complete fitness but because of the timescale of the injury I don’t think he’ll make it at Arsenal.

players generally come back from ACL’s pretty well too. The rehab process is very well understood to get the best results.

Afobe has what it takes to make it at Arsenal, he’s a big lump with very good technique and finishing but he’s never going to make it into the first team with all these set backs.
Part of the problem for him at lesser clubs has been the lack of a decent playmaker behind him, most of his goals at youth level were setup by Chuks Aneke; Afobe likes to evade defenders rather than confront them, which is sensible when you think about it but doesn’t suit a team of hoof merchants.

I’m sure he’ll be fine, I expect we’ll keep him for another 5 years, spend millions on getting him fit. then we’ll sell him to our nearest rivals as soon as he has a good season.
Don’t panic……..Diaby’s not going anywhere for the time being….

Time and again it seems our loanees get injured. Or is this a false impression I’m getting?

I hope we sell vermaelen and mertesacker. I fell nothing tactical or coaching will change what we have seen from these two so far. They seem to have grown fond of playing like shit, no sort of tactical, better coaching would help. I feel they feed off each others inability to perform so they both keep lowering their defensive ability/prowess with each game that passes.

I want a shake up, perhaps keep Koscienly then bring in either two of rami/albiol/williams/amobirreta. I’m however content with our fullbacks. Thoughts?

Do you have any basis for this assumption? Good coaching and organisation can make the world of difference, especially at CB. Even someone a shit as Shawcross can look capable if someone tells him what to do. Get well soon Benik. I suspect he wasn’t going to figure in Arsenes plans or we’d have seen a few more sub/cup appearances. But the timing is unfortunate for him. You could forsee a scenario where Arsene leaves at the end of the season, our ambitious board appoint Moyes (please no) who looks to promote a young forward but Afobe is out of… Read more »

Someone as shit as Shawcross has 10 other oaths in the box making it easier for him.

God why always us why oh why aint there any justice in this football world this is madness!! Seems like many youngsters who have a chance of breaking in the first team suffers serious injury! Henderson never managed to break in the first team squad because of a lengthy injury; Frimpong was in the fringes when ruled out for second cruciate knee injury while on loan at Wolves; now its Afobe out again for second long spell on the sidelines! Other prominsing youngsters also suffered serious injuries ie Kyle Ebecilio still out and Jordan Wynter is just coming back. Others… Read more »

Jiggalo
Reply to  Fed Up

The style of play makes us more prone to injuries. Only so many kicks you can take before it starts to do damage

Long term injury is so common to us, the arsenal.

Of course he did. Sigh.

Poor Afobe, I wish him the best in his recovery

I think it’s time we called a priest or something. I believe there is an injury demon lurking around the Emirates just waiting to sideline our talented youngsters.

[…] terms of Arsenal stuff it’s pretty quiet, but there’s been bad news for young striker Benik Afobe who will miss the rest of the season, and probably the calendar year, after rupturing his cruciate […]

[…] terms of Arsenal stuff it’s pretty quiet, but there’s been bad news for young striker Benik Afobe who will miss the rest of the season, and probably the calendar year, after rupturing his cruciate […]

Benik Afobe: Would He Have Been a Hit at Arsenal? | Gooner Daily

[…] the club in the 2012/13 season, Wenger fielded Afobe in a couple of preseason fixtures but he suffered a cruciate ligament injury that more or less called time on his Arsenal […]