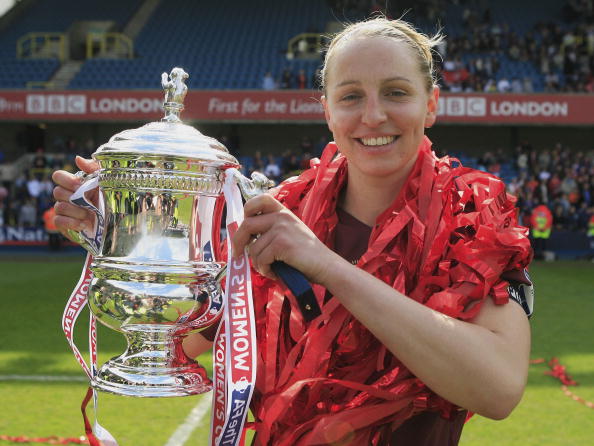 Faye White, talismanic captain of Arsenal Ladies, has announced her retirement thus bringing to an end a glittering career that has seen her represent the Gunners since 1996 and captain England for over a decade.

The 35-year-old defender, who stepped down from international duty in April after announcing her pregnancy, had planned to make a return on the domestic front only for a persistent knee problem to curtail her ambition of playing for new manager Shelley Kerr.

Having won pretty much everything possible at Arsenal, including 10 Premier League titles, nine FA Cup titles, the equivalent of the Champions League and the inaugural Women’s Super League, White’s achievements see her firmly etched in the history of the Ladies game alongside legendary boss, Vic Akers, the man who signed her after a chat in a McDonalds.

Speaking about his protégé Akers told Arsenal.com: “She was a born leader. She had a great attitude and was, and still is, a great role model for the women’s game.

“I think we’ll have to go a long way to find another player similar to her. She was one of my best signings ever. She captained the team magnificently and always showed great attitude. She’s a great person too.”

White won’t be straying too far from N5 in her retirement. In addition to undertaking commentary work for WSL games and promoting this year’s Women’s Champions League final, being played at Stamford Bridge, she’ll also be taking up a new ambassadorial role at the club.

No doubt she’ll be cheering on her former teammates this afternoon as the Ladies take on Italian side ASD Torres in their Champions League quarter-final first leg at Boreham Wood. Ticket information here.

Arseblog News wishes Faye all the best for the future and trusts the Ladies will do her proud in Europe.

To me, she’s the biggest legend of the club of all time. She deserves her own statue. She has won more than anyone in the game. The Ryan Giggs of Ladies Football (minus the disgusting person that he actually is in his private life).

Anyone saying otherwise is a sexist.

Possibly the most successful player to wear the red and white. Have a happy retirement Mrs. Arsenal!

A true Arsenal great, and a lovely lady to boot.

Made a great impression on my eldest daughter when she and Rachel Yankee did a schools tour, good luck Faye in all you do.

Faye White: 'It is the right time to retire from football' – BBC Sport | Pop My News