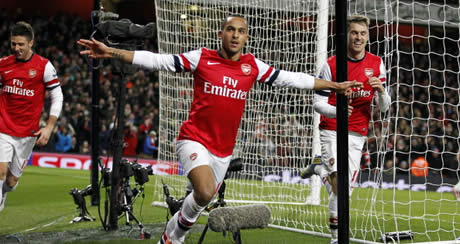 Theo Walcott admits that Arsene Wenger’s indication that he has a future as a striker proved a turning point in his drawn out contract negotiations.

The England international was repeatedly confined to substitute cameos at the start of the season while he stalled on a new deal but was eventually encouraged to put pen-to-paper in January after a comparatively successful stint leading the line for the Gunners; a role he’d had his eye on for quite some time.

Reflecting on the speculation which surrounded his future, the 23-year-old pinpointed his attacking ambitions while making clear, in that ‘king-of-the-bland-sound-bite’ way of his, that he has no problem functioning from the wing while Olivier Giroud is playing well. Naturally he also left out the bit where he agreed a six-figure sum for his weekly services.

“I think having an opportunity to play up front played a part. Saying that, I don’t feel we should change it at the moment with Olivier doing so well there. The manager obviously knows what’s best for the team, but it’s nice having more opportunities to show what I can do up front.”

Walcott also touched on his form this season admitting that he may have to set himself a new target for the end of the season having reached 18 goals; just two shy of his 20-mark objective.

“I wanted 20 goals in all competitions, so I may have to set another target! But I also wanted between 15 and 20 Premier League goals, and I’m on 11 at the moment.

“Assists are a bonus, but for a wide man, the number of goals I’ve got so far is definitely better than I would’ve thought.”

Given that this interview was initially published in the club’s official monthly magazine quite some time ago (before being uploaded on Arsenal.com today) Arseblog News can’t help but think Theo may have spoken a little too soon. After all he’s now been eight games without a goal since his second-half drive in the 2-2 draw with Liverpool at the end of January.

Fingers crossed he gets in the goal groove again soon…from experience we all know it sometimes takes him a while to start doing what he says he plans to do.

If the world was full of people like me – thank god it isnt – Theo`d normally start off every match hearing “Theo theo, tear da ting” sung at him.

thank god the world isnt full of people like you then indeed.

I think both him and Olivier can bag 20 this season still, and at least he admits that Giroud has been doing well in the centre. But Theo, you stalled long enough and pissed us off so stop cocking up in front of goal!

Time for one of those consistent patches he talks about.

Is that like a nicotine patch? Gonna get me some of those!

Usually in my dreams, I… Hold on, this was about Theo right?

I bet that Theo´s dream is still to be the new Henry, but he has not realized that he will forever be only Theo.
A player who sometimes is world class, sometimes terrible and sometimes “meh”.

I think he’d rather move centrally and play with Olivier’s balls.

how about they interlink, so they play with each other’s balls?

Lie. Money made u stay as no top club will condone ur inconsistency

@ Fofo:
Really?!? How do you explain players like Sinclair, Milner, Nasri, etc earning more, many clubs would have happily taken Theo especially on a free.
He’s going through a rough patch but he’s an asset worth keeping & I’m glad we did!

i get his point. i’m also happy he stayed, all in all, but such an opinion – that he’s suddenly comfortable playing from the wing – says it all. good he’s here, but modern footballers are really fucking low.

The league champions have Nasri, Man Utd. have Nani and Rooney, who goes through goalless patches every time he walks past a Krispy Kreme store and Chelsea have Torres and Hazard who also goes missing for weeks at a time.

So Arsenal have Theo that play half a season. We cant afford such player in our team for soooooooooooooooooo many reasons

Some never learn, I would rather have a player that contributes for half a season than the numerous players on the wage bill that don’t contribute at all!

Why is walcott taking our free kicks?????

Must be in his contract.

Because he’s so good in the air the gaffer thought it’d be best to give the opposition a sporting chance.

Only if you can take them well

Not necessarily. Not always.
Even a crappy freekick or a corner can get a goal.

Kick it into the box and hopefully someone will convert it. Although it depends primarily on the finishing skill of the player who gets to it, the assist is chalked up against the name of the player who takes the FK or the corner..

I would stipulate that kicking the ball into the box so that someone can possibly convert it constitutes a good corner/ free kick.

The chances of us bringing in a striker in the summer look pretty slim now.

Has he scored since signing the contract.

HitsMan
Reply to  Too Drunk To Be Offside

Yes, he scored against West Ham and Liverpool. Even did the contract signing celebration with Podolski.

Also against the Chavs

‘Assists are a bonus’

Says it all really about how important he now believes he is, might explain why he never passes as well…

Notice the number of frustrated players in good scoring positions whenever Theo runs down the middle.

I thought this was an Arsenal forum not a gay chatroom. Save that shit for elsewhere.

I love Arsenal and i Love the cock,what are you gonna do about it? I want to rub my helmet on Theo’s fuzzy little head while Giroud eats my ass, what of it?

I think the assists are important too. I agree theo is going through rough patch but it was his cross that made Oliver’s goal. Also, if not for that stupid offside decision he would have been 1 on 1 with goalkeeper. There is only one winner when that happens and it’s Theo.

He had improved in last 2 years and I think it will continue for the next few.

Oh dear,yet another insight into the wonderful world of Theo.I wish he’d just shut the fuck up & EARN his £100k per week.

It’s all very well him wanting to play in the middle, but who would tear down the wing, beating two players, and then kick it out behind for a goal kick – oh yeah, Gervinho!!!!

If wenger thinks he can do it, I’m inclined to believe him.

I didnt say anything for you to assume im against homosexual people. But as a football fan whos on a football forum, id rather not have to read about your desire for theos or girouds balls in your mouth. Like i said theres places for that shit.

Can I be the first person tonight to say “clitoral stimulation”?

I think theo should lay it all down and spray those long balls all of his in and around the area for giroud to TUCK them RIGHT in.

Is this why he has been wondering in from the wing rendering both himself and our right wing useless? When he stayed wide to collect, then maybe cutting in WITH the ball to provide/shoot he racked up goals and assists gallore. It is no coincidence his lack of positioning discipline of late has come with a lack of goals and assists from theo. Poldi out of action completes the drought and all of this impacts giroud. He gets criticism but the dynamic of the front three is off, and when it wasn’t he was doing his bit and banging them… Read more »