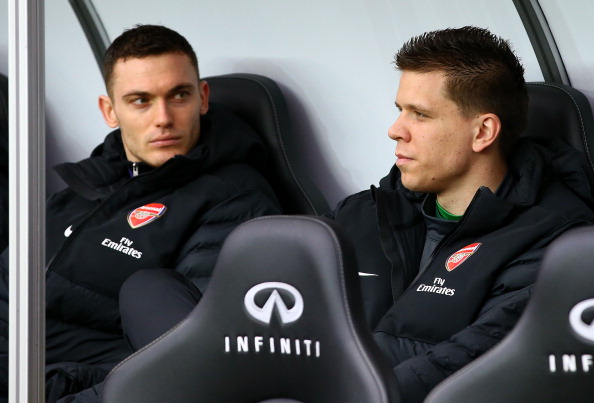 Thomas Vermaelen has joined Laurent Koscielny, Per Mertesacker and Wojciech Szczesny in stressing his commitment to the Arsenal cause dismissing any suggestion that Barcelona have approached him about a summer move

The Gunners captain also spoke about being dropped in recent weeks following a poor run of form stressing that he’s not unduly worried about the development and going so far as to joke that only Lionel Messi plays without mistakes.

“It will not be the last time that this happens,” the Belgian told voetbalkrant.com about spending time on the bench.

“As a professional footballer you know this is a possibility, I’m not worried. It is also only the last two games, for the rest of the season I played almost all the time, about 35 matches.

“Arsenal is also not a bad team, you know, of course there is competition [for places]. I have indeed made ​​mistakes, If I’d played all games flawlessly, I would have been Messi.”

Talking about his future at the Emirates, he continued: “My focus is on Arsenal. It is far from the end of the season. I’ve learned in football not to look too far ahead. From Barcelona I have not heard anything, no.”

Given that Carl Jenkinson, Kieran Gibbs and Nacho Monreal have each just signed contracts at the Emirates Arseblog News is just waiting on Bacary Sagna to confess his undying love for the Gunners and we’ll have completed the set.

Arseblog News translated this article from its original language. Please provide attribution to this article’s original URL (which is handily positioned in your browser’s address bar) when you copy and paste the quotes into content for your website and/or publication.

Thanks to @SiuFay for the heads up.

You’re a lot better than Pique, don’t let them tempt you, Verminator!

Find the whole situation totally annoying as gutter press try to destabilise clubs by writing garbage about players wanting/demanding to leave when they are dropped/rested.Why players should have to defend themselves/club is ridicolous..
Any decent club will have competition for places.It is a very healthy situation currently for AFC and long may it continue.

I find what is even more annoying is that AFC, due to our shaky past few years with *cunts* leaving arsenal at the drop of a hat, are being extremely exploited in the press when a single player as so much frowns once on the pitch. I have to give Arsene a massive congratulations though. It was clear that when this so called “new era” of players were coming through who were meant to lead us to the promise land came of age, all of them wanted to leave. Arsene has since started buying more english players and players known… Read more »

Nicely put! I agree with totally about the press. I just hate them. I hate the pimping, doctoring and blatant lies they tell their readers. I extremely hate the lack of responsibilty, they will lie, get caught and then cover that lie with a lie or just blame something else. Interesting point regarding how the press exploit the ‘situation’ at the club. Normally when a player talked about their future, in the past, it would be reported very plainly but today it is highly exaggerated and inciteful. About time our players have begun to shut reporters down. I guess Wenger… Read more »

Thank you. If only Shakira thought the same as you… 🙂

Actually really pissing me off how lazy and vindictive journalists are, ‘oh, Arsenal are starting to do well, let’s link all their players to really obvious clubs like…oh i don’t know…Barcelona.’ several players linked with moves in several days, people aren’t happy unless there’s a crisis.

Think about the fans of other clubs, with whose players we are seemingly linked all the time. Everytime a young player with potential comes through we are linked with them. They finally get someone they can worship, and we want that guy.
My point is, no use complaining, media are scum, end of.

Stan the Man!! If only you would buy some more.

I was Loop A Hole. How in the name of all the American bullshit did I become Stan Kroenke?

The point of having multiple to quality players at a bigger club is a) have injury cover b) have the ability to rotate during dips in form. The english media don’t understand how to manage a football team very well.

A N Other
Reply to  Dancing Cannon

Yes but they are focussed on getting eyeballs on their articles and they would write anything they can get away with it.

My spectacular prediction. Vermaelen will become a legendary Arsenal DM. He is quick, tough and fearless.

Put this in your iPad and email me in December 2013.

I doubt he’ll be “legendary” by December, so I’ll pass on the iPad thing.

Too Drunk To Be Offside
Reply to  ArseneIsYourDaddy

Not that I am against the idea of him as a DM, and I think he may actually do well in the mid, but Dec 2013 will be too soon to attain a legendary status. You don’t become a legend in 7 months.

THEREISBEARCUM
Reply to  Too Drunk To Be Offside

On the internet you do.

Fans have been claiming that Thomas should play as a DM since few weeks after he came here. It still hasn’t happened and I think there are many good reasons for that. For one he isn’t very disciplined. And I think many underestimate the difference between playing CB and DM. At CB you are always facing the field in front of you and being able to keep the ball in tight spaces isn’t that important. But in midfield, it’s all about awareness and close control, both qualities that I’m not too sure Vermaelen possesses.

^agreed… I think this perception comes from Vermaelen’s willingness to come forward, but even then, there is a strong difference between being available to attack and creating the attack. Especially since he’s so tall, and he lacks the passing finesse of Arteta, etc. … could you imagine Verminator laying a header for Cazorla to push forward hahaha…

I like Vermaelen but he just needs to work on becoming an excellent CB – I can’t see Wenger using him as a DM because he just doesn’t have the composure, close control, awareness or passing ability required in that role. I’m all for a bit of tenacious defence, but I feel Verm is just a bit too keen to rush into a challenge, or rush up out of our defensive line leading to the sort of gaps that opponents have exploited too easily this season. And the captaincy never really seemed the right fit for him either. Just let… Read more »

Ive always maintained that Vermalen would be an outstanding DM i really hope the boss would give it a go.

“From Barcelona I have not heard anything, no.” <—- in most UK press this will translate into "benched Arsenal skipper issues 'come and get me' plea to Barca"

Finsbury Park Gooner
Reply to  Too Drunk To Be Offside

I hope the next story the British media pulls out of its arse is simple too big, too unwieldy, but by the time they realise that it’s too late and they end up splitting themselves in half.

On second thoughts, that wouldn’t be painful enough.

out the gap with him, Kos the boss for the captaincy

I am not going to use ANY sarcasm in this message. I know that modern football reporting is just so…well balanced and not sensationalist at all. Missing two games is obviously the reason a footballer would leave a club to go to Barcelona. First of all, they are such a crappy team so leaving this club and going there would have to create the chance to start all the time! Second of all, once my family asked my brother to do a job instead of me for two days in a row and I thought to myself, “Well, it is… Read more »

It makes a change for a player to be “dropped”. The last few years players got rested or rotated.

Fans have been claiming that Thomas should play as a DM since few weeks after he came here. It still hasn’t happened and I think there are many good reasons for that. For one he isn’t very disciplined. And I think many underestimate the difference between playing CB and DM. At CB you are always facing the field in front of you and being able to keep the ball in tight spaces isn’t that important. But in midfield, it’s all about awareness and close control, both qualities that I’m not too sure Vermaelen possesses.

that was meant as a reply to ArseneIsYourDaddy

This isn’t true but I wouldn’t put it past those Barca wanks to have a go at another one of our players. All we need is the mayor of the city having a go at us again. They play great football for a bunch a twats.

*ArseneIsyourDaddy, Verm doesnt have the discipline to play the holding role. The reason he suffers drops in form as often as he does is down to this.
Putting him in the holding role will only serve to turn him into the next song!! We are crying out for a disciplined DM and i dont think Verm is that man.

All three of our CB’s linked with moves away in as many days? Nonsense

I think verm has enough athletic ability to become our best CB,hes stronger in the air than kos and can pass the ball around as well as mert to replicate his calming presence.The only problem Verm has is that he is too unbalanced when dealing with an aerial challenge maybe due to the fact he could do with an extra 5-10 pounds of muscle.Too often this season he’s been out-muscled or turned easily because of his lack of balance.What Verm should do is take notes from Rambo,simplify his game by focusing on defending first.Rambo has recently rid himself of the… Read more »

totally unrelated. just thought it would brighten up your day
http://www.youtube.com/watch?v=cv83zbbVd4E

Give gervinho shakira (confidence) and we might well…..okay wait just wait, not vermaelen, perhaps squillaci. Yes him. Barcelona, ya cunts!

British press this morning: Vermaelen in “secret talks” with barca as defender grows frustrated with bench role. They do this things you know, like the schezzer story earlier I saw this somewhere. Szczesney hits out at wenger….they ofcourse couldn’t pull it down fast enough as they later learned it was his father with the outrageous rant. Take nothing away though the second headline though, little to no impovement, I think we attract too much negative media for a good club that’s ran on good principles with players (exclude twat NB52) that steer well clear of making headlines for all the… Read more »

What do citeh with the tevez’ and nasris’ get? Nothing, nada

Since we have won at Bayern and beat Swansea and the dirty stinkin Spuds have started lossing the media have literally done everything possible to cause us trouble.

They have literally linked half our team with a move??

Their intellect puts us chavs to shame!

That’s what they all say, sorry but footballers can never ever be trusted. You just support the club and never get attached to any player.

But really any arsenal player who moves to barca after what hleb and now song have been is just well …..mad. Or blind

I have been browsing online more than 3 hours as of late, but I never discovered any interesting article like yours. It is beautiful price enough for me. In my view, if all web owners and bloggers made just right content as you did, the net will likely be a lot more useful than ever before.