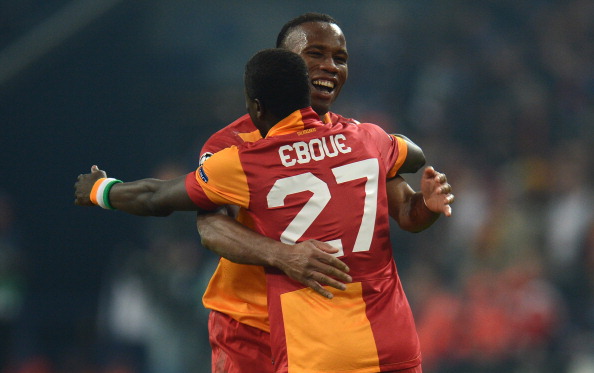 According to TurkishFootball.com, Arsenal have invited Galatasaray to take part in this summer’s Emirates Cup.

The showpiece pre-season tournament, which took a sabbatical last year due to the Olympics, is set to be played on the first weekend of August once the Gunners have returned from their tour of the Far East.

Galatasaray, who recently lured Wesley Sneijder and Didier Drogba to Istanbul, are better known to Arsenal fans as the club who paid good money for tiger-costume loving Emmanuel Eboue…well that and the ugly ruckus in Copenhagen when we lost to them in the UEFA Cup final back in 2000.

Reigning champions of the Turkish Super Lig, Fatih Terim’s side are certainly a force to be reckoned with at the moment having progressed to the Champions League quarter-finals.

In addition to the Turkish giants, the report also claims that Juventus and Real Madrid, who signed a sponsorship agreement with Emirates in 2011, could also make the trip to London. Both sides have featured before.

Whether Arsenal fans find themselves ironically chanting ‘We’ve only come to see Eboue’ remains to be seen. Confirmation on the Emirates Cup line-up and the rest of the pre-season schedule is expected in the coming weeks.

If Eboue doesnt get love from the crowd, I think I’ll cry. What truly made me a Gooner was when Eduardo scored against us at the Emirates, and the crowed cheered and said his name with the announcer. That shit left a warm feeling in me, and made me love this wonderful club, and it’s fans. Sure, Eboue didn’t break his leg or whatever, but no one can deny that he loved the club, and gave 100 % every time he came on, even if it was in the 90th minute. That, and he dribbled Frank Lampard so many times… Read more »

The second we see him on the pitch, the whole stadium will erupt in applause.

Especially if he goes for an old favourite stretching routine.

God I’d forgotten about that. so many wonderful Eboue memories are coming back. Though almost none of them are of him playing, of course.

Most probably he`ll think you a moron. Not that I`m defending 😉

But we have only come to see Eboue.

We will finally be reunited.

Dude, that video fucking killed me. Can you imagine how difficult it was for the manager to have kept a straight face? The assistant failed though.

I spilled my coffee watching this. Love the guy.

50 Shades of Gandalf the Grey
Reply to  Muse

https://www.youtube.com/watch?v=BybJu5jE22M
This had me in stitches as well, I bloody loved Diaby’s reaction

Fat Walrus
Reply to  50 Shades of Gandalf the Grey

It’s great how the two blokes behind him are trying not to laugh all the while.

Hooray get to wear my Eboue shirt again haha 😀

Not sure whether I’m looking forward more to seeing Eboue again (especially if he’s not playing for us) or Frimpong hopefully frimponging Drogba.

Great to see Eboue back, he kept the team gelling together for years. We should just put him in a room with Wenger and Szczesny’s dad.

Also, I know this isn’t precisely on topic, but cheers blogs for the headlines on the LATEST tab at the top of the page

Hmm, I have a sneaking suspicion that it’s possible that some of those might not be true.
I’m just waiting for the one about Barca’s interest in TGSTEL to confirm this.

I was a fool to ever leave your side Me minus you is such a lonely ride The breakup we had has made me lonesome and sad I realize I love you ‘Cause I want you bad, hey, hey I spent the evening with the radio Regret the moment that I let you go Our quarrel was such a way of learning so much I know now that I love you ‘Cause I need your touch, hey, hey Reunited and it feels so good Reunited ’cause we understood There’s one perfect fit And, sugar, this one is it We both… Read more »

Juve, Madrid and Galatasaray would be the strongest line up we’ve had I think, the emirates cup has always been a good day out especially when the sun is shinning

Ssssshhhhh, do you want to get us sued?

Good times. We’ll have to update this one though.

Club have forgotten our recent history with these knife bearing bunch of scum. Invite another Turkish club, not these ****s

Is thirteen years really ‘recent’ history? And how can you hate them, with Eboue in the team? (though they also do have Drogba…)

I was there
Reply to  Fat Walrus

Are you serious? We should hate them because Eboue is in the team? You say is 13 years really recent history, I know another father that went to that game and lost his job because of what was reported and banned and hasn’t worked since he lost his job and house because he couldn’t pay the mortgage after he was sacked for bringing the company into disrepute. He lost his tribunal unlike others that won theirs. All he got was a lousy apology 9 years later from one Piers Morgan. I still see him for a pint and he has… Read more »

Podolski Sklep
Reply to  I was there

I loathe Piers Morgan. It makes me sick to my stomach that he calls himself an Arsenal fan. Doubly so that some supporters even act as if he knows what he’s talking about.

You lot and your posts should learn your history. All going on about Eboue. These dirty mugs in copenhagen and the ensuing amount of people banned by the club for defending themselves in the 2000 final was a disgrace. The club banned people for simply protecting themselves, men women and children and then the club wants to invited them over to our ground? Seems with the new stadium they want to erase our history, not for me, I will never forget those three days with my little son in tow who was frightened to death. The club should be ashamed… Read more »

Adam
Reply to  I was there

Couldnt have put it better myself mate.

Absolute mongs the lot of ya

hell to the yes!! we finally get reunited with the man who brought a smile to our faces amidst the gloomy situations that had befallen Arsenal.

Should we make banners saying “Welcome to Heaven” to wave at the Galatasaray fans?

Whenever I hear the name “Eboue” my mind immediately goes back to that crazy game against Liverpool when he conceded that 98th minute penalty just after we had scored to “win” the game.

He was a decent squad player.

We arrived at Copenhagen at 7.30 am to a nice welcoming party at the airport.Our Hotel was in the Turkish part of town , which was fun .There is a large Turkish population in Copenhagen .most of them where up for it all day, no wonder the Danes hate the fuckers. The Police lost control it was pretty tasty both days we were there .dont want to see those pricks at our ground ,Arsenal ask anyone else .

At a loss to see how much further our club can be dragged down by the scum on our board. Clueless, disrespectful fuckwits the lot of them.

Talk about asking for trouble….I’m guessing that more than a few angry Gooners will be keen to settle the score back on our patch.

I’m not too keen on galatasaray coming. I suspect their fans are still after revenge for Copenhagen and I can’t think the police would be too happy. I suspect there will be trouble if they do come.