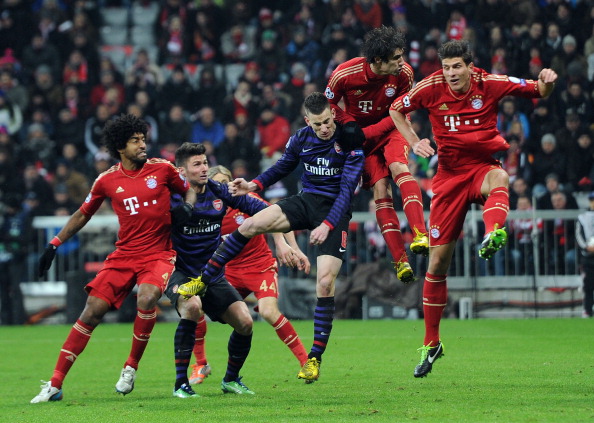 A calf injury sustained in Arsenal’s final pre-season game of the summer has been a key reason for Laurent Koscielny’s drop in form this season, according to Arsene Wenger.

The Frenchman, who with 33 starts was a near ever present in the Premier League last term, has only featured ten times from the off this season with persistent fitness problems and a couple of high profile mistakes against both Chelsea and Manchester City taking their toll on his confidence.

Impressive in Wednesday’s win over Bayern Munich, the boss admitted that Koscielny’s strength lies in seizing games by the scruff of the neck; a quality he hopes his compatriot will demonstrate in the next three months.

“He was outstanding on Wednesday night. He has shown a bit more authority than usual and when he gets into that frame of mind, you can see he has outstanding qualities.

“It’s something I know he has but he needs that authority in his game to get his qualities completely out.

“He says that he was disturbed in his preparation [in pre-season]. In our final game in Cologne, he had a calf injury. It took him a long, long time to come back and after that he had many setbacks through the season.

“And every time he was close to coming back, he had another injury or sickness. He was sick a lot this year.”

Another player who has seen his season ravaged by injuries is young Ryo Miyaichi. Sent on loan to Wigan he sustained a groin problem in November, an ankle knock during his rehabilitation and now, after being stretchered off in his comeback game against Everton last weekend, will undergo surgery to rectify ankle ligament damage.

A fan of the Japanese winger’s potential, Latics boss Roberto Martinez has underlined his desire to again work with Miyaichi while also paying lip service to the worrying trend of injuries which have affected the whole league.

“We will have to speak with Arsenal and we need to assess and make sure they are happy with the progression of the player,” said Martinez.

“Ryo is a footballer that we really admire and has an incredible future in front of him so if we could work with him for a longer period we would be very happy to do that.”

Reflecting on why he feels players are spending more and more time on the sidelines, Martinez speculated that the amount of rain in the last 12 months has made surfaces more dangerous for players.

“Football in general gets more demanding physically, that is clearly the way the game is developing,” he continued as he tackled the issue of injuries.

“The more technology in sports science means you create better athletes but I think the weather and rain we had this summer has created difficult surfaces to play and train on.

“It would be interesting to find out how many injuries clubs throughout the leagues have had compared to last year because the number has been much higher.

“I don’t think the physicality of the league has anything to do with that.”

Give him the game time to find his rhythm and confidence and he’ll be the best Center Back in the world. Also notable is that he has much better games when he plays as the left sided center back.

Not only that, but when he is paired with Mert. As for Vermaelen, maybe Wenger can try and deploy him as a DM. Wouldn’t hurt IMO.

I’m not sure if Vermaelen can replicate the passing of Song, let alone Arteta’s. It’s a specialist’s job.

The thing with Per is his lack of pace IS a huge drawback, now matter how much we say ‘oh but his positional play covers for it’. It doesn’t as much as we make it sound like. It is a disadvantage. It has cost us many a times. Why oh why did we not bid for Mbiwa? He was brilliant against us in the CL.

it costs us when we play a very high line with no pressure on the ball.
against bayern you saw us drop off and mert look very solid… even when flappy serves up terrible short passes

mert has been our most consistent cb all year. Mentally he calms and controls the defence. The fact he lacks pace is only a small drawback

Don’t think the high line is an issue, we pushed up against Bayern pretty regularly; the issue is the lack of pressure from midfield when combined with a high line. Sitting back would invite teams onto us and whilst we can deal with that pressure at times, we’re far more comfortable holding possession and keeping a measure of control.

I think from our current crop either Arteta or Ramsey have to play DM, Vermaelen, who has his own list of talents, does not have the range of passing, positional discipline or the composure these two do.

well that’s exactly what I just said no?

no pressure on the ball.

Agree with you about Verm completely. I think he can play the sort of DM who hustles and clears in front of the back 4, and would probably get a ton of interceptions, but he isn’t a technician and an Arsenal deep-lying midfield must be a superb passer.

As for Per. His speed is a weakness certainly but the back four is built around that. Mert pushes up because he isn’t the best one-on-one, and he can’t track back due to speed; but he is excellent at breaking up attacks, good in the air for the opposition goal kicks, a good passer, and his positional intelligence makes him very important. That is his role. He is never suppose to be the last line of defense, and if he is beaten high up the pitch, and the player beating him gets an open run at goal, then the defense as a whole fucked up, especially the fullbacks if they were too high up.

I think its a lot more than chemistry that makes everyone compatible with our BFG, while verm and kos are terrible together. The understanding of roles is key as no one does what mert does, and due to his weakness of pace, responsibilities are understood. Although, I very much hope Wenger finds that complimentary balance between Kos and Verm over the summer because they can be the Vertongen/Vermaelen of Ajax past.

You want pace? Put theo there & see whether he can do the job. CB is a specialist position & you need many more qualities to be an effective one. . .Such as reading the game & being at the right place at the right time, sliding in only at the vital moment & not blindly & gungholy, stayin on the feet as long as possible, being calm & collected, organised, mentally strong, confidence, etc. Mert has many of these required qualities. . .Pace will not be able to replace or overcome these qualities.

koscielny should be played often he is a big match player
his best performance came earlier against barcelona , ac milan and now bayern
but i also wish vermalean comes back to form because in form he is the best
COYG we want the swans for dinner

Give him more games, Koscielny isn’t a player you can have on the bench and throw in whenever needed and expect him to be on top. When he is good, he is really good. The problem is when he don’t get game time he looks abit off.

I have a problem with giroud, he kinda loses the ball alot in the final third thereby costing us alot of chances. He does not have great control with his feet, I don’t know what’s that about but I don’t think he’ll ever overcome it.

The only good thing about Giroud is that he is handsome and it is ok for blog,it is a pity we treated Chamakh badly

I would consider Giroud’s control and one touch passing to be amongst his best assets. I think it’s a lack of pace and reactions that is the problem. Regardless, he makes up for it with his excellent knock-downs, headers, and also unpredictability. I’m just waiting for one of his bicycle kicks/35 yard dipping volleys to come off!

Drogba gave the same impression at the start.

R18
Click to flag and open «Comment Reporting» form. You can choose reporting category and send message to website administrator. Admins may or may not choose to remove the comment or block the author. And please don't worry, your report will be anonymous.

Mert is exceptional at reading the game. He’s got some calm and composure about him that I like. Pace is one factor that has to compliment a good all round defender and he clearly lacks this. Caught out severally by the often pacy strikers but makes up for it with a goal every once a while against the sp*ds. (That’s his only defense worth it too! sorry)

Agree completely. First we should sack Arsene though.

Correction: must* sack. Once and for all.

Are you my younger brother Williams that cry about our trophylessness and still commend HFB,strikers in ruby teams score not to mention a footballing side like us,his sense of time and space is poor at best..knock down my abunna

Walcott is playing like a £1500 a week player and diaby? Oh my god I couldn’t get him off fast enough