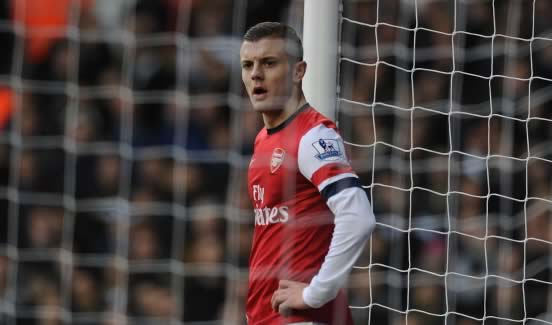 With the news of Abou Diaby’s cruciate injury still reverberating, it’s good to know the club are being extremely cautious with another, sadly, injury prone midfielder.

Jack Wilshere has missed Arsenal’s last two games, having been told he’d be left out for his own good. Arsene Wenger today explained that Wilshere wasn’t in any great discomfort, but having reviewed scans it was decided that the England international would be given a period of rest so as not to exacerbate the problem, and admitted it didn’t necessarily go down well.

“He had a difficult moment of course when we told him because he didn’t feel any special pain. But he knows he has to take care of his future. Because he is a very young player, I think he accepts it.

“We will rest him when it is needed. He has regular scans and as soon as we have an alert we will respect it no matter what is at stake.”

Wilshere is expected to miss the next two games, against Reading and West Brom, but all going well should be back for the Norwich game. And while the club are criticised often for the injury problems, credit where it’s due this time around.

Best be as cautious as possible here. Jack’s one of our best, we can’t afford for him to miss 14 months again.

I miss seeing Wilsheres gigantic, strong thighs filling those wonderful arsenal shorts as he glides blisfully in that midfield area, the ball at his feet, infront of gooner faithfuls week in week out doing a job.

The thighs! My God, the thighs.

He’s like the guy version of the female villain from Goldeneye.

Love Jack’s spirit. Hopefully he’ll feel better about having to sit out after the terrible news today.

Terrible news indeed… Can’t imagine how gutted he’ll be right now…I suggest a cheer or a banner of support from us, The Arsenal Family.. That he isn’t alone and we wishing him the best in whatever path he decides to take.. Such a talent that guy

Who needs Jack when we have Diaby,oh wait a minute!

That one foolish tackle. So sad.

Jesus, that is a disgrace.

We should milk Diaby and then do the human thing and put him down,it’s best for everyone.

Oh do stop being such a cunt Johnnycakes.

I was reading arsenal articles about Rocky yesterday and they did bring tear to my eyes, even though i never witnessed any live games of his but he sure is a legend a hero and many other things to all gooners out there. I have known about him for years but when a article comes about Rocky you have gotta read them and you know there certainly be a part in them which describes about his departure and you cant help but curse george graham for it. While reading it i was thinking would you get a joyful player like… Read more »

I bored after you started crying.

Great comment for a comedian. Johnnycakes, fuck off back to that parallel universe where people appreciate your sense of humour.

If there anything like world hospitals day? if there is diaby should get a mention.

With diaby out for the season, wilshere struggling for fitness, all this is ligning up well for a……wait, wait a rosicky hamstring tear.

Lokigoon word of warning they don’t like players fitness being made fun of around here.

Speaking as someone who has just recovered from a ruptured ACL, it’s really not very fertile comic ground. Somebody else’s physical pain rarely is, whichever team they play for.

I think I could just about wriggle a smirk if Shawcross managed to get hurt, but I’m fully with ur sentiments otherwise

I agree fully, having experienced the said injury twice over the last 6 years.

To be honest, and it may seem strange to some people in here, but I`m actually completely shocked with what happened to Diaby. I had total belief he was on his way to make up for lost time, having fully left behind his injury niggles. Until today, I mean, since I`m sure today is the day he himself lost his hope. I hope i`m wrong and overdramatising. Come on son!

Time for le coq to stand up and get counted.

“How many fingers are there in your right hand Johny?”
“6”
“How many times have I told you not to count your fingers after putting your hands in your trouser pockets?”

He needs to respect the wishes of his frail body and retire from football and be a medic or something. Smh. Can’t imagine how gutted he is but really it reaches a point and everything just seems to tell you it’s your end point.

The other day he was saying “i’ve learnt to manage my body better” and now all over sudden he’s crocked again. How quickly his situation has changed should make him realise.how bad it is. Get well soon, then retire.

The right decision’s been made here. As important as Jack is to our hopes this season, he’s not important enough to take this sort of risk. I wouldn’t want him to be happy about missing games, but it is for the best.
It does mean that our midfield will be a bit undermanned for the next couple of games but we should manage and it should present opportunities to the likes of Rosicky and Coquelin.

Give Jack as much rest as is needed please. This Diaby news has choked me big time. Genuine good guy and genuine talent and I fear, this could be the last shot of taking his rightful place at the table of top midfielders taken away from him. From what I gather of the guy, he has only ever wanted to succeed for Arsenal and France – and those in the know expected great things from him. I actually fear fr his state of mind and mental health as much as his physical condition right now, because this is a boy… Read more »

And happily our season is already over, so, no biggie yeah.. X

So, sad about Abou. I think he should consider a change of profession, like becoming a physio or something or maybe move to a less physically demanding league. Its just a shame that such a huge talent is being destroyed by injuries kick-started by that massive cunt, Dan Smith. Wilshere, please take the rest, I personally don’t mind if you don’t get to play this season anymore. We have a lot to play for next season. A chance for Le Coq, Rosicky, Eisfeld, Henderson, Toral, Olsson and the likes. Just win the remaining matches. It doesn’t matter who gets to… Read more »