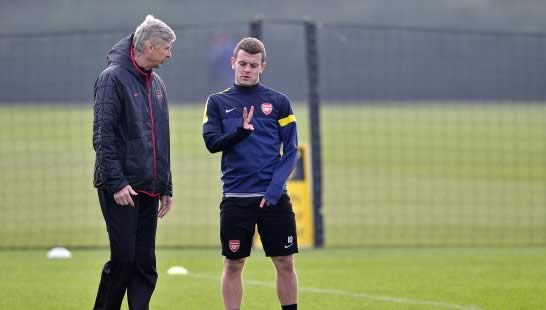 Jack Wilshere says Arsenal will do everything they can to take three points against Everton tonight as they continue the push for a top four place.

The England international returned to the side against Norwich after an enforced absence and admitted his performance wasn’t as good as it might have been, but he’s determined to push Arsenal over the finishing line as high up the table as possible.

“We need to win, we know that, and we’ll do whatever it takes to achieve it,” he told Arsenal Player. “Everton are a very good team. It’s an especially hard game when you go to Goodison Park, but even when they come here you know what you’re in for.

“They’ve got good players, can hit you on the counter-attack, have a strong midfield and are hard to break down. They are four points behind us, so it’s massive that we come into it after winning on Saturday.”

And of his performance against Norwich, he admitted rustiness but said it was always the plan to play him for an hour to help him regain some fitness.

“I know it was only six weeks but you still lose your match sharpness and it takes a few games to come. But it’s always nice to come back to a home game.

“I’m feeling fine. I needed the game on Saturday and am happy the boss gave it to me. The plan was always that I’d play an hour. I don’t know what the boss will do [against Everton] – if he plays me then I’m fit and ready, and otherwise I’ll be ready to contribute from the bench if needed.”

Meanwhile, Arsene Wenger has admitted he brought Wilshere back when he wasn’t 100% fit, but at this point of the season that’s something many managers do with their best players.

The manager is confident there won’t be any repercussions, however.

“How careful must I be? To listen well to the medical advice and that is what I have to do. Use him when everything is alright and listen to him as well, how he feels. He has been out for six weeks, so maybe it was a bit too rushed what I did.

“But he has practised with me since he was 16, so I know quite well how his body responds to things.”

Tomas Rosicky is fit again and in contention to replace Wilshere if the manager makes a change this evening, while a late decision will be made over Lukasz Fabianski who is struggling with a rib injury.

Chew up that Toffee with the big hair Jack, spit him out and then move on to the next one.
Good lad….

Shere Willpower. 100% commitment by the team. So lovely to see

“But he has practised with me since he was 16, so I know quite well how his body responds to things.” Funny to think about how Wenger knew Fabregas, Wilshere, Ramsey, Walcott, Clichy and dozens more, all of these now grown-up and big and strong and fast and skilful men, when they were just kids, small and immature and fragile. Watched them grow up, develop confidence (develop egos), make career-changing decisions, in some cases outright spit in his face, all under his guidance and care. He’s a really fascinating man, Arsene Wenger. People always talk about how lucky young players… Read more »

If this is sarcastic it’s pretty funny.
If it’s not, it’s still pretty funny, but for a sadder reason

For me, the telling thing about Arsene is how few (if any) of his charges have a bad thing to say about him.

They can leave, perhaps under a cloud, perhaps dislike what the club did, but ask them about Wenger…….

The two best managers in England both are effective father-figures for their players: Ferguson is the strict (abusive ?) parent, and then there is Wenger’s style.

Who is best? Objectively I didn’t know. Watching Cesc, Henry and others run half the pitch to hug the boss after scoring tells me which I prefer.

Fergies little boy ran half the pitch to hug him after scoring a penalty for his first goal in 2 months this weekend. Scumbag, how can you have that much affection for a manager you’ve known for 9 months?

Maybe the little boy inside him just forgot where he was for a second:

Run up to Fergie. *hug*, ‘thanks for everything boss’. *Jumps back* ‘who the fuck are you?’ and then the depth of his betrayal strikes him again.

Yep, sadly I don’t believe the last bit either.

Yeah that made me want to throw up. I don’t hate most of the standard ex-players we hate. I don’t really feel like Cole, Adebayor or Nasri owed us, or Wenger, that much. Cole was amazing for us for a long time and helped us win trophies. Adebayor and Nasri weren’t with us that long, and we got a fuck load of money for both of them even though they clearly aren’t even that good at football. I can’t really be bothered to hate them. But Van Persie did owe us – he certainly owed Wenger. Wenger stood by him… Read more »

RVP is a cunt. I don’t think i’ll ever despise any other ex arsenal player as much as I do him.

Wenger : Where do you think we’ll end up, Jack??

Wenger : And next season??

Wenger : Attaboy!! Now start running and do a Rosicky!!

He is saying to Wenger that he has two balls

I got 2 problems and sp*rs ain’t one of them!

I didn’t think it was worth risking him on Saturday, it would have been better to play Santi in Am and Chambo wing then have him as a 60/70 min sub, saying that Jack was probably begging Wenger to play him. He will probably go back to the West Brom lineup unless he wants to swap Gervinho for Walcott, and where to start Podolski or even Chambo, so many choices never thought I would say that!

What a gooner this lad is. You really do get the sense that the 3 points are so much more important than anything else after reading this.

I just read arseblog before and saw that giroud poldi and walcott have only started together 4 times this year in all competitions? I am absolutely gobsmacked at that number. I genuinely thought that was our front three trio for quite a while this year……… this rollercoaster ride of a season must be taking its toll on my poor memory.

anyways, 3 points a must, Witwicky must start in the middle. COYG!!

Apart from having Witwicky Wilshere starting today, I fully felt that thought too.

COYG.. This end of season form and our game against united.. Should be the warning to all title contenders fod next season.. That we are going to be in it as well.. Not just looking for 3rd/ 4th best.. God makes me smile again.. Almost, really close to that arsenal we waited so long to see again.. Everton bring it.. This is the emirates.. Our fortress.. Lol I’ll stop nw because of the excitememnt!!

They also pillow fight like a bunch of little girls.

That’s an insult to girls.

“I have been with him since he was 16, I know quite well how his body responds to things.” – Naughty Wenger

Why is Perry Groves saying Wilshere will leave if we don’t win trophy next year. His comments frustrated me…

PG’s gone the way of all too many ex-Arsenal player-pundits.

It’s lazy thinking coupled with the need to get on the airwaves. It’s his living now.

Third in the league again. In the summer there is always talk of winning the Premiership and Champions league. By March we are out of all competitions. In April we become excited about getting third and beating Spurs who last won the premiership 50 years ago. Already the summer mantra sung by all football teams is being heard at Arsenal, ” A couple of big signings and we will win big again “. Nine years in a row the same promises, the same failure to deliver. But next season we really will win big, a couple of big signings and……believe… Read more »

Then what the hell are doing here? Shitty or no Gooners Love Arsenal for what it is – the good the bad. It’s in the blood it’s in the heart. If I want to get all high and stoned with glory there’s a lot to pick out there – MU, Barca, Munich etc. We have a bad spell for years, but that does not mean we despair. We keep the faith. Makes it even more meaningful. By all account I want to see the current squad to hold together in one piece and break through the next season. Just dont… Read more »

The possibility of finishing third with a settled squad, and despite attempts already by the media to shake out a story, no signs of a significant departure.

In the best form of the entire season, due to options in the squad and increasing understanding and confidence between the players.

For the first time in years we have the probability of starting next season in a stronger position than the last and without the need to integrate a number of new core players.

I’d say we have a genuine right to hope for the future.

Wilshere out (he’s not fit), Rosicky in.

If we defend well then we’ll win. I fancy a very tight 2-1 victory.

These late season runs of consistency stem from the fact that the team know each other better. We just need to keep them together for two straight years and just tweek a few things, add a new striker and maybe slip the Coq in more often to mix it up and we should have ourselfs a STEW!

Your right, we do have the basic ingredients for a great team. If we can get through this summer without other teams cherry picking our best players , along with a couple of solid signings, I believe we may see beginnings of a Trophy winning team.

Important game tonight. Not just for Champions league football, but also preparing for next season. Thou we have won 7 of the last 8 games, which has been great fun, we are still suffering from not competing with the top teams this season. Not only do we want this winning streak to continue, we also need the new team to get the confidence of beating the top teams for next season.. Beating Everton tonight and Man U next week will not only (probably) gain us Champions League football,, but also give us the momentum to move on into next season… Read more »

We will be the towering jagged rocks to their flimsy lifeboat.

If we’re not seriously at it, this game could easily pass us by. I’d like to see us push for the first goal more aggressively than usual. Perhaps Poldi and Ox wide, Theo to arrive when they tire?