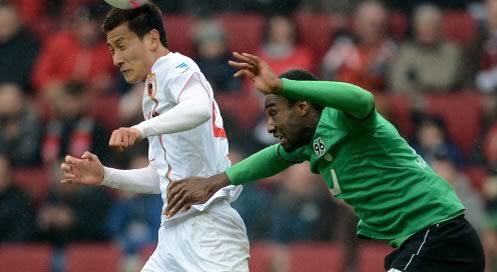 After a mysterious consultant named Marco Lichsteiner spoke last week about Johan Djourou’s desire to stay in the Bundesliga when his loan deal expires this summer, the player himself has reiterated that stance.

Speaking to Neue Presse Hannover, the Swiss international said, “It would be fantastic if the clubs could agree on a deal. I have been given the chance to play here and I am getting better and better and slowly finding my old form.”

The key issue will be the cost of any deal. With a contract that’s not ending any time soon, Arsenal may look to get as much money as possible as they plan summer purchases of their own, something Djourou is well aware of.

“It is a difficult situation since I still have two years left on my contract in London,” he said.

It all depends on what Arsene’s motives were for sending the player on loan. If he felt he was surplus to requirements, then it’s quite possible a permanent solution can be found.

However, if it was to give him a chance to play before coming back to Arsenal then it might take a solid fee to tempt a sale.

All the same, Arseblog News would put our money on the former. If we had any. Damn you, Creme Eggs.

There was a time in 2010-11 when he truly was immense for Arsenal. Some say messi is still in his pocket. Decent defender when he gets consistent gametime it seems. Hope the best situation is found for all concerned. Personally wouldn’t be annoyed to see him on the books next season.

Fantastic person but decent at best as a footballer. All this purple patch talk is totally irrelevant. Reyes, Arsha, even Santos had a good spell. One of the attributes of a quality player is consistency. Hannover is a very good club, I hope the parties can work out a reasonable solution.

It’s a good point, but the only time he was ever deployed consistently as a CB (’10-’11), he performed well. Before and after that spell he was always deployed either out of position or as backup, which is hard on players of any quality.

He’s a quality defender in my book. Perhaps not at the level of Verm/Kos/Mert on their day, but not far off, and about as good a backup defender as you could ask for.

My best wishes for his career, even if it’s not with Arsenal.

He could come back and be LANS!

But I don’t blame him for not wanting to. I’m sure the club wants his salary off the books too.

Djourou deserves some credit for what he had to put up with last season. Wasn’t his fault he was grossly played out of position and he never complained, always smiled.

This guy has respect for the club and we can only wish our current players are half as loyal as him.

Creme eggs… droool. How do you imitate Homer’s drool? And how do you differentiate it from a zombie drool and moan. Important life questions.

Are you guys all insane. have you ever seen this guy play. He takes about 10 seconds to stop the ball and get ready for his next pass. it would be a backwards step letting him back in the defensive line.

for me we haven’t yet found a replacement for Johann who can replicate his uncanny reading of the financial markets, or his indepth understanding of senior collateral debt consolidation strategy. And when it comes to hedging against fluctuations in fractured and fluid currency markets, Djourou is without peer.

And who have we replaced him with?

PER METERSACKER who collects fines! What sort of fiscal madness is this?

Emannuel Eboue
Reply to  the only sam is nelson

You are right, sir.

I remember he had shocker against Milan last season, I can’t see him coming back and making it into the 1st team.

I would be quite upset if we did sell him: He seems like a genuinely lovely person, good defender who didn’t complain when played out of position and we need 4 centre-halves in the squad.

Okay Djorou we heard you the first time, now shut up already.

I was in London Luton eating a burger King, and sitting in the table next to me was none other than douro himself, he even had time for a pic with me and i told him plz don’t leave arsenal, which he then just laughed and walked away

Im not sorry to say that id prefer him to be sold. I want Arsenals squad to be improved and deadwood shifted. no matter what run we go on from now till end of season. I want us to challenge for title next year. not 4th place. COYG

The Important thing we need to sort out is the difference between Deadwood and Backup/Squad players. Djourou is not a player you would pick for the First XI, but is of a good enough quality to use as a Backup Player, so i would not consider him Deadwood. When any 2 of the main 3 (Kos, Mert & Verm) are injured and we have a big game coming up, would you rather see a Youth player come in or see Djourou? He’s a good quality 4th defender, although he probably wouldnt want to be 4th choice as any good footballer… Read more »

Was great for us for a season, got injured and then was rushed back as we needed him badly, form suffered. Some nob fans got on his case, got benched, Wenger played him out of position, he tried his hardest but couldn’t adapt to it.
Good bloke, not dumb either. We should sell him for a small fee but take a 90% sell-on fee as if his form comes back, we’ll make a killing when Man City sign him for 75mil.

JD is a good player. All players need playing time to improve. He is not getting it. .. I wish him the best. I also hope ,in the future, we do not regret letting him go without a fair shot.