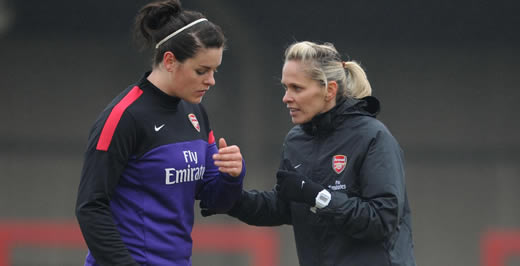 Arsenal Ladies have been in fine fettle in 2013 (aren’t they always?) A 7-0 demolition of Nottingham Forest, followed by a brutal 6-0 masterclass over closest domestic rivals Birmingham City has seen them into the F.A. Cup semi final against Liverpool later in the month. Of more immediate concern is their Champions League semi final against VfL Wolfsburg. The first leg takes place this weekend at Borehamwood’s Meadow Park (ticket details are at the bottom of this article), with the second leg in Germany a week on Sunday.

Arsenal won Europe’s premier prize in 2007, but since then they haven’t been able to make it beyond the semi final stage- where they have been eliminated in each of the last two seasons. Arsenal will go into the tie as slight favourites, having beaten German champions Turbine Potsdam earlier in the competition. The girls have an added incentive with this year’s final being played in London at Stamford Bridge.

Arseblog News was given the opportunity to interview new Ladies manager Shelley Kerr and promptly despatched Tim Stillman to do the honours.

Arsenal defeated Birmingham convincingly on Tuesday night. Birmingham are typically Arsenal’s closest domestic rivals in the hunt for honours. How much confidence does beating them 6-0 give you for Sunday?

I was very interested in how we would fare against Birmingham. Games between us are usually very close, it’s a different squad at Birmingham and they’ve lost some players in the close season, but they’ve such a good squad. From our point of view, it showed how good we are when our game plan is executed as perfectly as it was on Tuesday.

We’ve all worked very hard in training, everyone has been exemplary and everybody performed perfectly on the night. That gives us great confidence for Sunday, because against Wolfsburg, we’ll have to do that again.

As you suggested, games between the two teams are often closer. Did the score line surprise you and the girls?

Yes, it probably did in truth. Birmingham are still regrouping but they’ve got a great squad, probably bigger than ours. But this is the way we want to play all the time, this is what we have worked on in training. We want a high tempo, attractive passing game and that’s what we produced on Tuesday. We want to be clinical in front of goal. On Tuesday the team played the way that we coach them to play and that was a delight to see. We’re scoring goals from everywhere too, out forwards and midfielders and getting in on the act and our defenders are nice and tight at the back, so we have a good basis for Sunday.

You’re now into the semi final with a tie against Liverpool. The F.A. have chosen Anfield as the “neutral” venue for the tie. Do you think that might give Liverpool a lift?

It probably will, but it will give us a lift too to play in such a fantastic, historic stadium. In the women’s game, I’m not a huge believer in home and away advantage. It can actually add pressure on a team to play on a big “home” ground. We see it as a big opportunity, the girls are really hurt that they didn’t make the final last year and I think you saw that on Tuesday night. We want to put that right and win this trophy again and I think you’ve seen that the girls are really thinking of it in that way.

You’ve very recently taken over from Laura Harvey as manager. How did you get the job? Did you apply or did the club approach you?

It started with a conversation with Vic (Akers) and progressed quickly from there.

Your background of course is that you managed the Scotland U-19 side and had a technical role within the Scottish F.A. Arsenal are currently blooding some exciting young players with the likes of Faye White and Julie Fleeting now gone. Did your strong development background come into that conversation, given where the club are?

You’d have to ask Vic that! I think to get a job like this you have to be the whole package and have experience at all levels. I had a solid background as a player, I was lucky enough to represent my country and played for Doncaster Belles. I recently passed my FIFA Pro badges so I’m fully licensed and, yes, I’ve had a hand in youth development, which Arsenal probably looked at.

But it has to be a whole package, success has to be apparent in your character to get a job like this. You can’t expect much of a life outside football, you have to be a proven winner and that has to permeate your character and your experience at all levels.

You’ve not added to the squad personnel wise in the off season. Is that testament to your belief in the young talent the club has, or are you just evaluating for the moment?

A bit of both. I’ve not been here very long and I’m evaluating what I have. But what I’ve seen and what I knew before I started was that I have an exceptionally talented squad of players here. Arsenal’s track record demands respect and I have so much trust in everybody that’s here, staff and players.

There’s a good blend of youth and experience in the squad and I felt that this was a well balanced setup. I’m in my infancy as the manager at the moment and my job is to see how I can build on what we have here as we progress.

Since Faye White has retired, the captaincy has changed hands in the few games since you have been here. Who is the captain when everybody is fit?

It sounds clichéd, but I believe in collective leadership. At Arsenal everybody needs to be a leader, because the players are of the highest quality. Leadership isn’t something that can be done in isolation, there are different parts to it. We will be looking to the experienced players to bring the young players on, but at the same time, we want the youngsters to show that they have what it takes.

Everybody will be asked to do their bit, but you have to appoint someone with that extra bit of responsibility. Kelly and Steph have great attributes to do that and to pass their knowledge down to the young players as well.

Kelly Smith played in midfield against Torres, whereas Laura Harvey tended to play her further upfield. Is midfield where you envisage Kelly playing this year?

She’s such a talented player that she could play anywhere on the pitch; certainly in the forward areas. Torres are very strong in midfield and I think we saw that over the tie. I started Kelly there because I felt that we needed to match up with them in the centre of the pitch. She has played there before and what you saw, before she got injured, was a fantastic all round performance.

Will she be fit for either of the Wolfsburg games?

What we can say is that she’s certainly unavailable for the first leg. It’s a soft tissue problem in her ankle and the situation with an injury like that can change from day to day. We don’t yet know about the second leg, we’ll see how it goes and make an informed decision nearer the time. But she definitely won’t be available this Sunday.

Who do you think are Wolfsburg’s players to watch?

They’re a great outfit and are especially very strong going forward. They have Alexandra Popp upfront, who is a technically fantastic striker and Conny Pollers too. Martina Muller is very dangerous. They have great experience in midfield and the captain Nadine Kessler is important to them there. Certainly Popp and Pollers are the ones to watch.

Finally Shelley, you’ve gotten off to a great start as Arsenal manager. The reality is that the expectation is that Arsenal win the domestic double at least, possibly the treble. But this is the stage of the Champions League that has tripped Arsenal up for the last two years. How much pressure do you feel personally on this game? Is this your chance to really make your mark as manager?

I’m not looking at it like that. I think there’s far too much attention on coaches and their records, football is about players. I don’t feel any pressure. I will prepare the girls as best I can for these two legs and they’re huge hurdles for us to climb. I’ll help, support and guide them as best I can and give them as much attention to detail as possible, but it’s about who makes the best decisions on the day.

We’re arguably favourites for the tie but the pressure was probably greater in the previous rounds. We’re always expected to get to the semi finals because that’s where we’ve been for the last two years. We’re here again now so in a sense, we’ve achieved a basic target. The girls can go out and relax and enjoy the game and use their knowledge and experience.

Sometimes things you do on the training ground come off perfectly and your decisions go for you, sometimes not, but it’ll be about who makes the best decisions of the two teams. I have every confidence that all of us can do that and that we can play with freedom in the two games and make that last step to the final in London.

Thanks very much to Shelley for taking time out to talk to us. If you want to go and cheer the girls on in the first leg, you can do so on Sunday. The match against Wolfsburg takes place on Sunday at 2pm at Borehamwood’s Meadow Park. Tickets are £5 for adults and £2.50 concessions.

Arsenal’s doing well all round. The ladies too. Ooh to be a gunner!

What’s the apostrophe on *get’s for?, yeah what’s that about!