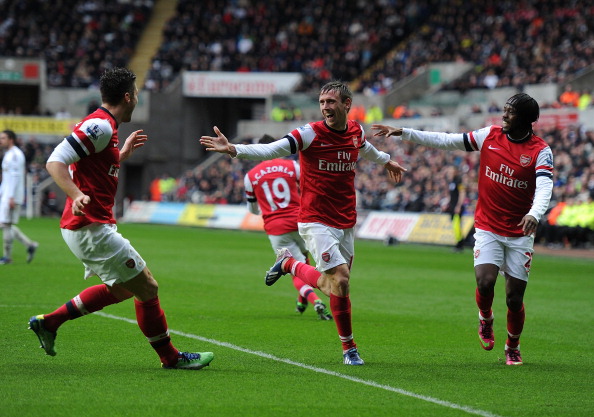 Nacho Monreal admits that not speaking English has complicated his adaptation to life at Arsenal but stressed that with the backing of Arsene Wenger and the help of compatriots Mikel Arteta and Santi Cazorla he’s enjoying the challenge posed by the Premier League.

The left-back has so far looked solid in his seven appearances for the Gunners, bagging his first goal for the club in the win at Swansea and providing much needed competition for Kieran Gibbs following the loan exit of Andre Santos.

Reflecting on his first couple of months in London, Monreal told Arsenal.com:

“Everything has been challenging in different amounts, because the league is completely different to La Liga.

“Coming here and not speaking the language, being unable to communicate with my teammates, is one of many difficult situations that is making me grow as a person and as a player.

“It has been tough adapting to the type of football played here in England as the players are a lot more physical.

“There’s also a different style of play, as I’ve said before there’s an emphasis on reaching your opponent’s goal as quickly as possible. I’ve been here two months now and little by little I am adapting to this style of play. I am happy to be here.”

Thanking Arsene Wenger for trusting him with a first team place from the off, Monreal continued:

“Since I’ve been here the manager has given me a lot of confidence and he’s been starting me. This has been very important for me because it helps a lot to feel that the manager has faith in me, especially as I’ve just arrived. This in turn this leads to good performances.”

Following in the footsteps of Jose Antonio Reyes our Spanish defender also paid lip service to England’s horrifically drawn-out cold spell confessing that the weather has been arguably the biggest shock to the system.

“The worst change for me is the difference between a very hot town in the south of Spain and the freezing cold weather over here!”

“However, London is one of the best, perhaps even the best city in Europe. It’s very diverse. You can go out and there are cinemas, theatres… there’s a lot of choice. Thanks to the help of Santi and Mikel I’m adapting well to the way of life over here and I’m happy.”

As Steve Bould revealed yesterday, Monreal will be fit to face West Bromwich Albion having recovered from a knock to his knee sustained in a collision with the goal post during the Reading game.

He has integrated into arsenal like duck to water.

Aero
Reply to  A N Other

Integrated very well indeed!
He reminds me of the way Bacary came straight into the team when he signed and was simply just awesome. Monreal seems to have a similar kind of work ethic.

Unyoke The Ox
Reply to  Aero

Does anyone remember when Sagna played without his trademark braids for one game (he sported a frohawk instead)? He had a shocker and got them reattached for the next game. There’s magic in them braids I tells ya.

I think it was in his first season.

king_bilo
Reply to  A N Other

His performances so far have been crisp.

There may come a day when a post about Nacho appears on Arseblog News, and no-one posts a joke about his name.

BUT TODAY IS NOT THAT DAY!

(Nacho will probably leave the club before that happens.)

Nacho will be the best LB in the EPL next season. Gibbs will eventually become the best in a few years time.

The Prem. Not the fucking EPL please. It’s just the prem, the premier league, or even the Barclays Premier League if you really want.

God that fucks me off.

It’s the way foreign fans distinguish it from other Premier Leagues, take the SPL for example.

everyone isn’t in Europe my friend. expand your mindset to the fact its a global world

Its alright! Dont get your knickers into a twist!

It’s nice that we have two really good options at both right and leftback with Jenks, Sagna, Gibbs and Nacho. A bit diffrent compared to last years fullback crisis

This team just need to get to know each other a bit more.. And with 1 good striker addiotion and maaybe CB od DM.. We can actually be much more stronger next season.

Errr. Arsenal reaching the goal as soon as possible? Hope the spanish boys aren’t inventing their own tactics over there…

What he’s talking about is the pace have you (tried) to watch a typical la liga game? You wake up twice; at half time and full time. They are freaking slow.

Let’s hope slating the weather is as far as he goes ‘in the footsteps of jose antonio reyes’…..

Anyone notice Arteta acting as a translator when the team doctor was talking to him after he clattered himself into the goal post asgainst Reading?

The mic was so close. Nacho said something like “I banged a Pole” and you could clearly hear Arteta say “am not telling him about last night”

*i need to improve my spanish*

Nacho must have been talking about one of our keepers, amirite?

I don’t think it was ever a problem for Paul Merson! He’ll be fine.

“…..Thanks to the help of
Santi and Mikel I’m adapting well
to the way of life over here and
I’m happy.”

London people must be the best at welcoming newcomers. I read somewhere Juan Mata say “… Thanks to john terry, my wife is adapting to the way of life over here”

He’ll be fine once he learns the language – he’ll be speaking Frence in no time.

I don’t know if I’m missing something here, but I am sixteen years in this job and I have no clue how you could type an ‘e’ instead of an ‘h’ as they are so far apart on the keyboard.

He was the man of the match against France when Spain played them recently. Offensively he was an absolute beast.

If he can be found more his crosses + Giroud’s head = goals galore!

In no time he’ll learn english, german, french and spanish.

A language known as spengerinch.

He has been an excellent acquisition, no doubt.

I am interested in how aggressive our club is internally in ensuring foreign players learn English ASAP, particularly important for communication on the pitch. I say this because I see quite a few interviews on ATVO of players that have been at our club for quite a decent amount of time, yet some of them still struggle to speak English with any fluency, and in some cases still require a translator.