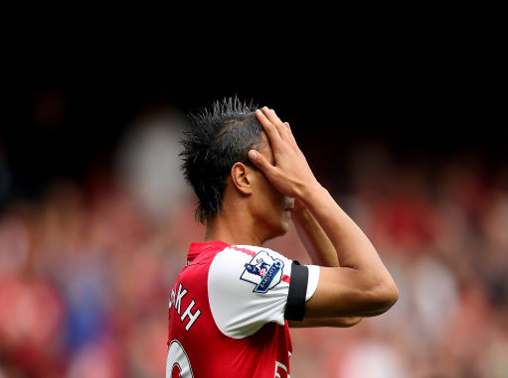 Bordeaux say they’d be willing to take back former striker Marouane Chamakh, as long as they didn’t have to pay anything for him.

Speaking to sudouest.fr, the Girondins president, Jean-Louis Triaud, said there’d been no contact with the man they ‘lost’ on a free transfer to Arsenal in the summer of 2010, but that he’d be more than happy to discuss a return if Chamakh picked up the phone.

It seems Triaud is in no mood to pay actual money for the player, and who can blame him after a miserable two seasons which saw the Moroccan score just 3 goals and end up farmed out on loan at West Ham where he hasn’t played since Jan 31st.

“If he calls me, I’ll answer it with pleasure,” he said, “but Arsenal should still be willing to let him go [for no fee].”

Frankly, the chances of any club spending money on a transfer fee for a player who has lost his way so badly are very slim, and if giving him away on a free transfer means we can get him off the books, then it seems like a good deal for all concerned.

“Everyone knows that Bordeaux is a club that is in my heart. If I find an agreement with Bordeaux, why not. Yes, this is possible because there is a good chance that I will not stay at Arsenal.

“If I come back to France, it will be in Bordeaux.”

How about you give us a tenner and we throw in Squillaci, free of charge?

Arsenal: what if we pay YOU?

Bordeaux: no we’ll just take him for free

While you’re there, would you be interested in a perfectly good brazilian midfielder? Only a couple of careful owners, once described as ‘a little bit Thomas Rosicky, a little bit Gilberto’, can pass backwards with unerring consistency. Good little runner (sideways only), £450 ono. Will deliver.

Oh my, i forgot we only loaned him. Was convinced he was sold

Wish Chamakh the best in France then. Could be good for him after all.

I get the feeling if he has a good run of games in a good set up the goals will come back. He managed 10 goals in his first 20 or so games, league, champions league and cup for arsenal. Thats actually a lot better than Giroud who got 6 in his first 20 or so, although I think they got similar assists. With that said Giroud has been afforded a lot more time due to the cunt leaving whereas the cunt returned when Chamakh was still doing good. I hope he does well, but I recon it will be… Read more »

I see this template being used by ‘exclusive’ and ‘credible’ sources all over the internet already. Ha 😀
news.arseblog.com/2013/04/exclusive-arsenal-miss-out-on-player-name/

Shall we have a whipround and pay him to take Chamakh?

That’s bull! You gotta pay up. For someone who’s on such a hot streak he couldn’t be allowed on the pitch anymore due to god-like goal scoring feats. You just have to pay up!

In fairness, seeing as we paid them nought, it’s all reasonable.

Plus Bordeaux could have to pay a signing-on fee to cover some of the wage gap.

So….Pulis is gone and Bordeaux want to take Chamakh?? No fooling???

THIS IS THE BEST DAY EVER

Apparently, Cavani to City is almost a done deal (Napoli will be getting Dzeko and, probably, a boat load of cash). Too bad for us.

Chamakh is like an underwear. We all want one. Not the expensive type coz heck its a freakin pantie! and who the hell cares which type you own. We just want one to get the satisfaction. Whether it does its job or not at the end of the day you do have one.

Piers Morgan. It’s to be expected.

Will Arsenal let him go for nothing? Doubt it otherwise they would have let all those other shithead players leave for nothing like Bendtner, Arshavin, Vela and Denilson. Chamakh’s deal must have a year or two to run yet.

Chamakh has already cost us £7.5m in wages and I’m sure Arsenal will want to get some of that back, so expect him to be loaned out next season to some dipshit club where even he can score goals. Either that or we’re stuck with him.

We don’t own Vela, already sold him.

Free! No way! They should take Denilson and Bendtner too!

Oh come on…we can certainly at least get a bag of hot dogs for him. We have transfer market inflation to consider here gents.

I’d feel like for free we are ripping them off a bit.

If we send him on loan , do the other club pay his wages or is it divided?

It depends, but when player with high wages goes on loan to a (much) smaller club, the wages are usually split, though rarely, if ever, you will find an official statement even confirming it, not even saying what’s the split. But I guess that just checking the average salary in the destination cup will give you an idea how much they will be paying the player, the rest is on you, unless the player is willing to take some wage cuts.

Wake me up, yaya sonogo, we hope you’re better than that ***t from togo!

Dick Law apparently at Barca to finalise a deal. Announcement to be made sunday.

Shitbird says “bullshit,” Dicky Law is there to take Fabregas home to London and return the gold-plated addidas he borrowed from Song back in August.

Dick law is there to plead with barcelona to come in for one of our stars players. He’s found it hard to deal with the fact that this summer no one wants to join those inbred cunts.

Lol no chance. If we are over there it will be to poach another of their youngsters.

Bordeaux will be disappointed then. No way they can compete with Barcelona’s financial muscle.

We should sell Chamakh back to them but let them pay it off over time, £3mil over 3 years seems realistic.

£3 over three years seems more realistic to me.

I bought some milk today, and when I noticed the date on it was June 3 my heart broke a little–by then Arshavin will no longer be at Arsenal.

I would gladly have him over for a farewell donut.

Chamak leaving. Whoopie. Please no one say he was a likeable lad blah blah. He was useless . Arsene wenger made some terrible purchases after the invincable era. To be fair he made a few good ones too. But overall his buying was poor. The “I can do no wrong ” hang over from the invincibles era has been very very costly. Recently the buying has improved considerably especially Arteta Mertasacker and Santi. Poldi and Giroud are still to fully prove themselves but they show promise and have played plenty of games. The positive trend seems likely to continue although… Read more »

How about payment in kind, you want him on a free? right, take diaby as well and treat him on our behalf. * covers face and runs out*

Chamakh must be delighted that Bordeaux rate him so highly that they’d only take him back for free.

What a shot in the arm for his self esteem…

[…] quick gossip before I go, Chamakh may be returning to Bordeux on a free, we may be considering David Villa and Cesc from Barca (which I’d love) and although it’s […]