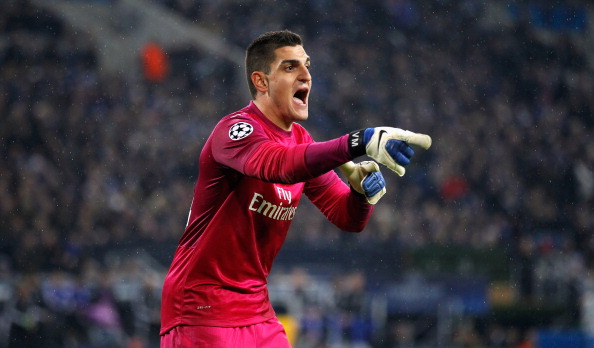 Vito Mannone is close to signing for Sunderland in a deal that will see him leave Arsenal after an eight year spell at the club.

The Italian stopper joined as a teenager from Atalanta in 2005 but has failed to convince Arsene Wenger he’s a long-term candidate for the number 1 position.

Mannone enjoyed two positive loan spells at Hull City and made a total of 13 appearances last season, filling in when both Wojciech Szczesny and Lukasz Fabianski were out injured.

Mannone is set to join up with fellow Italian Paolo di Canio at the Stadium of Light as the Black Cats look to replace Belgian Simon Mignolet who signed for Liverpool this week.

It remains to be seen if Arsenal are in the market for another keeper this summer, but with Mignolet at Liverpool Pepe Reina’s name has been mentioned again. Arsene Wenger tried to bring the Spaniard to the club a few summers ago, but this was when he was still a goalkeeper who could keep goal and not a clapped out baldy old gimp like he is today.

There are a lot of likes for this comment, but I’m embarrassed to say I don’t get what the joke is. Would anybody be kind enough to point it out, don’t want to miss out on some laughs

Watch the video on Arsenal Player with Theo & Mannone chat.

Are Sunderland buying him or did his contract expire? If the former, what’s the approximate amount we’re going to get for him?

cestriangooner
Reply to  the only sam is nelson

frrrred
Reply to  the only sam is nelson

meh, transfer small fry maybe but it all goes to the higuain fund i suppose plus in our starved state any transfer confirmed news is interesting, so long as it stats interesting, and not alarming

Guess so. Is Higuain any good in goal though? He’ll need to be if we get a couple of injuries or suspensions.

Manone is prepared to move because he wants to play and he is on a low salary, 20k a week. Compare that to Arshavin 90k per week and Squilacci 60k per week who refused to go any where because they were on a fat salary. Arseholes. Sunderland are getting a real bargain. Good luck to Mannone he deserves his chance.

Good for him if he’s going to be N. 1. I guess Wenger should do a Poom and buy someone that can both cover and compete with Wojciech.

So, bring back Mart Poom then

Goodluck Don Vito! Won’t forget your MOTM performance vs Fulham at Craven Cottage. All the best at Sunderland!

By all means, not Cesar. He’s expensive and frankly not worth it. He might be good on the line but he’s horrible comming off it.

By all means, not Cesar. He’s expensive and frankly not worth it. He might be good on the line but he’s horrible comming off it. I’d rather have a relative unknown, htere’s no need to inflate wthe wage bill for a second keeper.

He was great last year, started 24 league games of which two were won.

My QPR mate said he is an amazing 1 vs 1 shot stopper but ask him to catch and he turns into a girl.

That’s an insult to girls. There are plenty of girls who can catch, and I would bet (unless you’re Gigi Buffon), there are plenty who catch a lot better than you.

Accept your point in regard to catching like a girl. A terribly sexist saying. But does he throw like a girl?

You’d have to think we’ll be looking to bring someone in then. Martinez promo would be the cheaper option though…

Martinez needs to go on loan. His performance in the Carling Cup was horrible. I’d put that down to inexperience and nerves so I think he needs to get some proper football under his belt elsewhere before he’s allowed to compete for us.

The theme for us this transfer window, at least until now, seems to be ‘clear out’, both applicable to first team and youth level. After clearing players it’s time for you to buy some Mr Wenger. Cesar seems decent to provide competition for SZCZ and Fabianski. Still waiting for positive news in terms of incoming transfer.

Good luck Vito
All we seem to be doing is getting rid of players, we have still to spend a penny!!!!
I know its still a long way to go, but i cant pretend im not worried, but its the Arsenal afterall and we never do things the easy way 🙁

Does the door only open one way at Arsenal at the moment?

There’s a limited capacity in the room, so someone has got to leave for someone else to come in.

As far as I know, the transfer window opens on Monday. Transfers will be announced then, I suppose. The Higuain transfer might well be agreed already.

They can be announced anytime, the 1st is only for the paperwork.

I wouldn’t hold your breathe. Other clubs are announcing their deals when they are done. I’m to the point where I wouldn’t be surprised if the Higuain deal falls through. All it takes if for some mega rich club to say, “hay he’d look pretty here!” and he’s gone.

A lot of people were saying we need a new keeper, so this isn’t a surprise to see one leave, but our lack of activity in buying anyone in any position is getting a little frustrating now, especially with our perceived rivals having already done some good business.

Kinda makes me angry mignolet went to one mediocre club to another. Thought he wanted to do bigger and better things.

Begovic and Vorm are the real prizes out there, in my opinion.

Begovic for sure. Not sold on Verm

Best of luck to the Don, think he’ll do very well through being a regular in a first team. Hope they add a clause in the agreement on first refusal should they sell on.

How did Sunderland sign Don Vito? “They made him an offer he couldn’t refuse.”

He can throw the ball ninety yards. That means they don’t need midfielders at all and can buy some tall strikers instead.

All quiet on the Higuain front..

Good luck Vito all the best in Sunderland.

You don’t make the Don an offer he cannot refuse, he makes you an offer you cannot refuse. Probably threatened to make Di Canio wear his wristwatch on his left hand if he didn’t sign him.

Good luck Vitamin owny. Just make sure you play totally shite against us yeh? Thanks.

Don’t know why we weren’t interested in mingolet, better option than Cesar

Best option is begovic but will they sell to us?

Maybe a veteran, Aussie is on his way!

If the club were serious about that, it would have been done two years ago.

lets hope di canio can make him into a great gk too bad he will be a domestic enemy.
meanwhile i hope we dont sign reina, his form have been regressing for the past couple of season and is one of the reason why liverpool are so s**t.
i still see julio cesar as the ideal gk for us.

Wenger pls sign Begovic.. He will be a tough competitor to SZCZ

Oh my goodness! Incredible article dude! Thanks, However I am having difficulties with your RSS.
I don’t know the reason why I can’t join it. Is there
anybody else having similar RSS problems? Anyone that knows the answer will you kindly respond?
Thanx!!

My head feels like this | Arseblog … an Arsenal blog

[…] latest is that Vito Mannone is on his way to Sunderland, who are in need of a goalkeeper having sold Simon Mignolet to the Mugsmashers. Good luck to him, I […]

Vbk “Wenger pls sign Begovic.. He will be a tough competitor to SZCZ”

Not sure if Arsene actually checks Arseblog for pointers but if he does then CAN WE HAVE SOME NEWS ON HIGUAIN!!!

We have been after him since 2008. Once described as the new kaka. If he will come, I suspect we will pay whatever is required.

I prefer to reminisce about his save against Fulham with his nose,chin & nuts!

It’s good to see all the news about exits. Arshavin, Mannone, Djourou, Squillaci, Denilson, Bendtner, wow! including the youths too.

If we can just add park chamakh and santos to the exit list i.d almost be a happy gooner….too depressing thinking of them as arsenal players. Goodbye shite..i can wait a bit longer for the quality to arrive

Good luck mate…. Saved our arses against Fulham…. Will remember you for that….

Right here is the perfect web site for anyone who would like to find
out about this topic. You understand a whole lot its almost
hard to argue with you (not that I personally will need to…HaHa).
You certainly put a fresh spin on a subject that’s been discussed for decades. Wonderful stuff, just excellent!streetdirectory