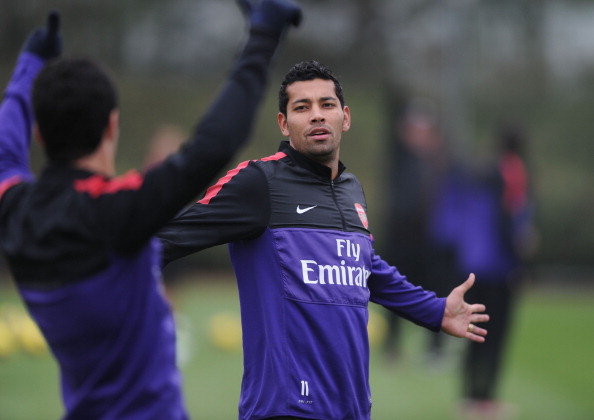 Andre Santos says he’d have liked to stay at Gremio, but will return to Arsenal this summer as his loan deal has ended.

The Brazilian international went back to his home land in February, after Arsenal brought in Nacho Monreal on deadline day, and, judging by his Instagram, seems to have enjoyed himself there.

However, Gremio’s early departure from the Copa Libertadores meant they eschewed an option to keep him longer and it’s back to London for him.

“My loan deal is over,” he said. “It was six months long and now I am returning. Gremio had an agreement with Arsenal and I have to return. I wanted to stay.

“Gremio were fair regarding everything. I felt well there and I wanted to win a title before leaving. Unfortunately there is no deal and I had to return to Arsenal.”

Arseblog News has no issue with his use of the word ‘unfortunately’, it speaks of a self-awareness rather than a dismissal of life at Arsenal. He knows it’s over for him here and wants to play elsewhere.

With reported interest from Turkey, as well as Arsenal’s willingness to accommodate the departures of players who are clearly unwanted, we might stick a cheeky fiver on him moving on sooner rather than later.

Considering his fitness he probably wanted to stay away from chips and the little mozart.

The food or the chairman?

Everything Arsenal has got since he moved away is Nacho and Chips. Stay away Andre, it’s not good for you.

If he was so desperate to stay there he would have taken a pay cut to stay.

This summer more than ever, however, I’m confident that the club will actually move him on.

Thanks, Andre, for lots of giggles and two crucial equalizers last year.

Spot on in my opinion. I think the issue is we want some form of transfer fee for chunky talentless shirt taking faux Brazilian. Plus I’m sure he wants to draw his decent £60k wage packet as long as possible.

Hope we find another club for him this summer. It’s defo over for him at Arsenal.

Santos, Denilson, Bendtner, Chamak , Park, Djourou, maybe Girvinho all soon to be leaving we are told. But how many will be off the books but still on the pay roll? .

Hill-Wood is being replaced by Sir Chips. Chip off the old bloke no doubt ha ha ha.

Hill-Wood loves those boobies in The Star…

Maybe give him the fiver for his taxi out of there. Shoud get him about as far as N17.

Just dont use him as a defender, he does TRY and get back put him on the wing or as a striker like the hulk guy. he certainly can dribble more ways than theo.
Ahhh i quit.

Most players you can make some sort of case for but this guy has been utterly useless from day one. I mean really bloody awful. I’m a Wenger fan but this guy goes down as one of his worst buys. The shirt swapping incident said it all. Nice guy maybe but absolutely no idea what it means to wear the shirt.

It’s amazing what a shirt can do to your career.

All he had to do was disguise himself and sneak into the “theatre of sleep” to buy a shirt. But, No. He had to ask for one in broad daylight. From van-shitty?

What he needs is an IQ test.

He’s actually a good footballer just not on the right amount of money. I think gremio would have liked to prolong his stay but the money he’s on proved a stumbing block no doubt.

I don’t mind having him back if he plays on the wing. His stabby tackles would be more useful a bit further up the pitch and it might excuse his positioning. When he loses the ball it also wouldn’t be so critical as losing it as a left back high up the pitch. I wouldn’t want him starting but he could still come in handy. If he does go then, meh.

It’s a shame it didn’t work out for him. Some times he showed touches of brilliance but the majority if time he was not the kind if player we needed. Defo needed Nacho but if Gibbs stays fit I still can’t see him getting too much of a look in either. Maybe we should have kept Meade? Oh well! Roll on next season

He was crap. Wenger’s biggest joke. Here’s yet another player who will suck up precious wages whle contributing absolutely nothing to the squad.

By the way: it’s amazing how everything has gone so quiet on the transfers front, isn’t it? Where’s Rooney and Higuian? The only signing on the cards will be when the Nutty Professor gets a two-year extension as a reward for winning nothing for nearly a decade. What a fucking joke.

His fate was sealed when he pawed for RVP’s jersey at half like a giddy school girl at Old Trafford. Vaya con dios, superchunk.

Convert him into a winger imo, the guy is decent at full confidence.