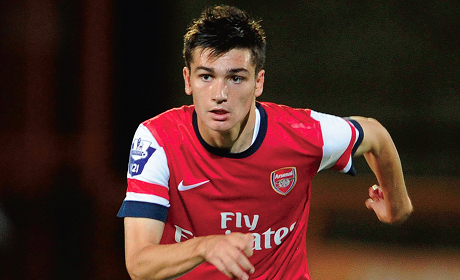 A couple of years ago there were suggestions that youngsters in England do not play enough competitive fixtures over the course of a season. That sentiment certainly doesn’t apply to the 2013/14 campaign, with Arsenal set to field teams in five different competitions over the coming months, raising the possibility that, across all age-groups, the club’s youngsters could participate in as many as 70 games during the season.

In addition to the U21 and U18 Premier League campaigns, which are both already up and running, and the FA Youth Cup, which top flight sides enter in December, Arsenal will also compete in two new competitions at youth level this season: the UEFA Youth League and the U21 Premier League Cup.

The UEFA Youth League is effectively a more glamorous replacement for the NextGen Series, which will not be taking place this year due to funding costs. Mirroring the format and clubs of the Champions League proper, the competition will enable Arsenal to test themselves against some of the best young players in Europe. Like the first-team they will face Marseille, Borussia Dortmund and Napoli in the group stages as they attempt to make their way through to the knockout rounds, where they could come up against the likes of Barcelona and Real Madrid.

The U21 Premier League Cup, meanwhile, is a brand new knockout competition which will see match-ups between academies of differing levels from across the country. The fact that Arsenal are participating in so many youth competitions this season means that all of the club’s youngsters can be afforded regular playing time, but, at present, there are concerns regarding whether the club have enough depth to field sides for so many games.

Already this season, the U21 game at home to Aston Villa had to be put back to November due to the lack of players available at the time, whilst, following the departure of many youngsters at the end of last season, the U18 and U21 squads are effectively the same group, with only a small number of players no longer eligible for the younger age group.

To make matters worse, several important players are missing through injury. Benik Afobe, Jon Toral (pictured above), Zak Ansah, Zach Fagan, Nico Yennaris, Brandon Ormonde-Ottewill, Alfred Mugabo and Tarum Dawkins are yet to feature at any level this season, whilst yesterday it emerged that two of the club’s most promising talents, Gedion Zelalem and Dan Crowley, will both be out of action for at least two months.

The problem will hopefully be rectified shortly, with a larger first-team squad meaning that fringe senior players, such as Emmanuel Frimpong and Ryo, can now be used in the U21s. There is the possibility that both players could feature tomorrow, when the U21s face West Bromwich Albion at Emirates Stadium.

Some one should look into the matter of why arsenal players are so injury prone. Barca are also side with diminutive players,but they are not as injury prone as arsenal it seems(though we play in epl many players get injured in training as i noticed). Our training routine must be not optimal i guess. Can someone explain or put forward this issue as failure of physical trainers ?

One can only assume training consists of a medieval gauntlet of obstacles. You know, the occasional pit of spikes to jump over and not to mention the jousting challenges against Steve Bould.

All youth players undergo rigorous torture in order to prove that they have the mental strength required t play at the club.
Unfortunately, this can lead to the occasional injury, and has led to some pundits and players to refer to Arsene’s training methods as “outdated”

Welcome to my world lads, there’s plenty of room

I remember that tosser clichy said that at arsenal the training was soft and they’re not allowed to tackle… When he left for man shitty.

Not sure how much truth there is to that but it could be that we’re under-training them as oppose to over-training.

I’m sure our style draws more tackles / fouls than most and this has an impact but according to physio.com man utd had more injuries over the last two seasons and spurs had about as many, albeit that we wre all higher than average. I agree it seems as though Arsenal have more injuries than everyone else but I suppose, as Arsenal fans, we just notice them more.

That said I didn’t look further back than the last 2 seasons so may be a longer period would tell a different story.

Have they managed to appoint a coach yet?

Our injury toll is no ‘accident.’ Clearly opposing defenders are told to take out our most creative and dangerous players to reduce their influence. That much was blatantly obvious in the Villa game when our best were hacked down all over the pitch. The offenders were encouraged by a hopeless and seemingly blind referee who did nothing at all to stop them or to protect the victims. Thuggery in football is still alive and well in 2013.