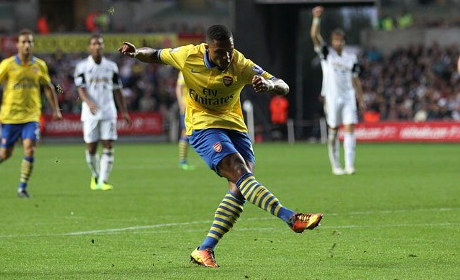 Serge Gnabry was already a familiar figure to most Arsenal supporters following his fleeting first-team appearances last season, but, in the past ten days or so the Germany U19 international has seen his stock rise considerably after being asked to fill in for the injured Theo Walcott in three consecutive fixtures for the senior side.

Arsene Wenger’s decision to entrust Gnabry with a starting berth yielded mixed results. The youngster started nervously in the Premier League against Stoke City, but gradually grew into the game before delivering what was, by his lofty standards, a rather disappointing showing against West Bromwich Albion in the Capital One Cup last week.

Even given the lack of options on the right wing, it was still something of a surprise to see Gnabry chosen in the starting line-up again for the visit to Swansea City last weekend, but the 18 year old certainly seized the opportunity, scoring his first senior goal and also creating a presentable goalscoring opportunity for Olivier Giroud following a breathtaking surge into the penalty area.

Gnabry also showed a willingness to track back and assist his team-mates defensively, something he has not always been known to do at youth level, and, overall, can be very pleased with how the month of September unfolded in terms of his footballing progression, particularly following his stellar showing against Marseille in the UEFA Youth League a couple of weeks previously.

Now, the challenge will be for Gnabry to continue to perform impressively when he inevitably finds himself back in the U21s in the coming months, particularly when Santi Cazorla, Alex Oxlade-Chamberlain and Lukas Podolski return from injury. It has often been the case that players, after receiving a taste of senior football, lack the application upon returning to the second-string, but Gnabry certainly seems a determined individual, so hopefully there won’t be too many problems in that regard.

Depending on how the injury situation transpires and also on Arsenal’s progression in the Capital One Cup, Gnabry may head out on loan in the second half of the campaign as he seeks to accelerate his development even further. Perhaps Wenger will wait until next season before he allows Gnabry to experience regular football elsewhere, but the Frenchman seemed certain in his belief that Gnabry already possesses the physical attributes to compete at the top level, even if, in just his third season at the club since joining as a 16 year old from Stuttgart, he is still far from the finished article.

There are still many challenges ahead, but Serge Gnabry, having received a taste of the big-time, will be eager to re-assert himself at the top level as quickly as possible.

Wenger gnows that gnabry will gnab his chances. Now I’m gonna gnit some sweaters. If you need me just gnock. Gbye.

I like that Arsenal are finally starting to have these types of problems. We have too much talent in midfield and a developing competition on the wings

I have a sneaky feeling the Capital One Cup squad will go a fair way still, so sending him out on loan seems a bit premature IMO.

He’s gonna be a good player, Wenger is putting no pressure on him and he’s surrounded by good experienced players and they talk about the squad being too thin.

Loan? No thank you. Injuries come and go and just a couple weeks ago we were lamenting the thinness of the squad. We need him for the cup games as well.

Agreed, games come fast and furious when you’re competing on four fronts including the COC. Gnabry already could be considerred the ‘preferred’ right-winger when we face opposition with a dangerous leftback, as his willingness to track-back and defensive contrinbution is arguably already superior to Theo’s.

Gnarby is already a great player, and he keeps improving all the time, he is very mature and clever plus his skills and his speed he gonna be the player of the future, i love walcott but he is gonna be alot better

Unyoke The Ox
Reply to  Gil

Take it easy with this “great” talk. He has a lot of potential, some of which has already been realised, but it takes more than a few prem starts to be great.

I wish him the best of luck and hope that this German/Anglo (with a dash of Spanish and a sprig of French) continues to prove successful for years to come.

Fickle
Reply to  Unyoke The Ox

Knowing our luck with injuries, I dare say we’ll be seeing a bit more of him later in the season. I’m a lot more comfortable with out stocks out wide now that he’s played a bit though, he’s further along than I thought he was.

Gooner til the end

Above all things, I like that he’s not afraid to take the initiative and make something happen

Would love to see him at Hull or something in the second half of the season!
For me he has the potential to leave Walcott in his shadow in one or two seasons

He is very similar to the Ox in stature and style of play. They are both very versatile in their positioning so will be great for the long term. I like the fact that they have a good variety of attacking players with different styles and attributes to learn from. Also with the likes of Arteta, Flamini and Ramsey, they will learn the importance of teamwork and defensive responsibility.