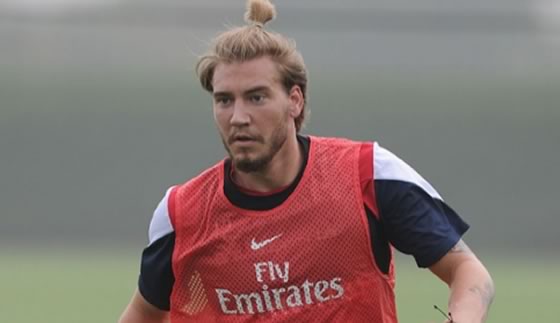 Arsene Wenger has confirmed that Nicklas Bendtner will be out for a month after damaging his ankle against Cardiff.

Speaking after the 2-0 win over Sp*rs, the manager confirmed the absence of the Dane as he then worried about Theo Walcott who had be, hilariously, stretchered off late on.

The England winger looked to catch his studs in the turf and hurt his knee, and Wenger said, “Theo has a knee problem, we don’t know if it is a stretched ligament or just a kick.”

After a pretty good showing up top today, it would be cruel if we were dealt another striking injury blow, but if there’s any right time to pick up injuries it’s when the transfer window will be open.

Wenger praised his performance, saying, “I liked what Theo did today in the centre. He added purpose, commitment, decisiveness & fighting attitude.”

I like how Theo reminded Sp*rs of the scoreline…

Roy Keane was so funny afterwards about the incident, first time I ever found him ammusing

Ledley King looked like he was about to cry!

Normally when being carted off past your rival’s fans you would keep your head down. But no, our boy sat proud and told them the score. Theo, I salute you and fuck off Spuds.

His was smiling when he left (with that legendary banter)! Doesn’t seem too bad.. didn’t look in too much pain..

“Legendary Banter” I love that 😀

And once again FUCK SPURS!

I hope it’s not much more than one month. Giroud would need help in Feb but more importantly in March.

So did i lol very much so – shame he got injured and hope its not serious!!!!!!

Uff. Was afraid it was gonna be “two three weeks”

Injury seemed bad. But then smiling and winding up spurs fans. So hopefully okay. Funny how medics were acting as bodyguards….clearly thinking “fuck this!”

i’ll Get to moaning over this bendtner injury as soon as i get over the sweet beating we just handed the filthy sp*rs.

This may take a while. coyfg!

Injuries cant belittle our progress….
We are on top of d table and top of injury lists but fuck it…let d season end today,we will still be winners.

Grant Holt as a striker would solve 2 problems.

1. BIG target man
2. would eat all the lasagne so nobody on the team would get sick except him*

*must be kept away from Ryo at snack time

Even the linesman agreed with that decision!

Sadly it was a rewind video. But the kid is a true Gooner

Thus this mean we are going to buy a striker? Without Walcott’s injury, I would have been happy with the squad we have because IMO Walcott led the line extremely well today. He gives our game a different dimension which is refreshing but can we cope without another out and out striker?
That head ache is for Wenger, let me enjoy this special Tri-Annual Chicken fest.

A month for the Dane and Walcott likely out for similar length of time? C’mon Wenger do some business in the market asap.

Forced into the market unless Gnabry and podolski play upfront as back up to Giroud.

No wasting time the window is open just buy a striker any decent one will do the job with the likes of Gnabry,Santi,Mozart,Ozil supplying the ammunition, Berba or Benteke for me.

So two strikers that between them have scored less league goals than Ramsey?

thank God you are not part of the scouting team.

We have a few days to rest. Hopefully, HFB will be back by then. The supporting cast Poldi, Ozil, Rosicky, Wilshere, Santi n Gnabry will be there to support. Poldi as back up for Giroud is enough IMO. No need to delve into the uncertainty of January.D Ox will be back too.

He’s on a big success suicidal mission, the Great Dane Noble only cares for us putting his safety and own life aside. Fact.

classic wenger. you need to listen to the moronic questions being asked and the smart answers wenger gives.

Sad to hear about the lay off time of Bendtner’s injury.