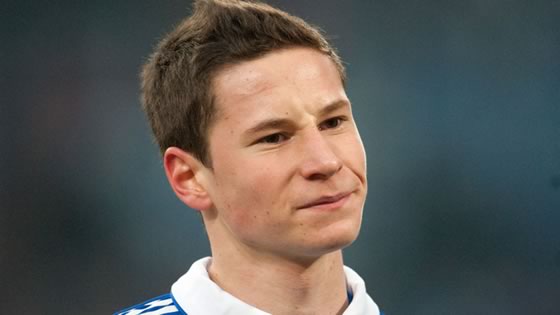 Schalke’s general manager Horst Heldt has dismissed paper talk linking Julian Draxler with a move to Arsenal as ‘wild speculation’ claiming the midfielder won’t leave the Veltins-Arena this month or in the summer.

The 20-year-old is rumoured to have had a tour of London Colney in recent weeks, shrugged off by Arsene Wenger as unfounded as UFOs, with the Gunners weighing up a bid that would match the German international’s €45 million buyout clause.

Speaking to German newspaper WAZ (no we’ve not made that up) Heldt remained bullish about Schalke’s desire to keep their star man.

“I am not aware that Julian would like to leave us, neither in the winter nor in summer.

“There is no question of a bid regarding Julian. At the end of it, it’s wild speculation, which takes place over there in England.

“The clubs would have to report to us if they were interested.”

Elsewhere, new analysis by the CIES Football Observatory, published today by Sportingintelligence, reveals Arsenal usurped Manchester United as England’s producer of the most players playing in Europe’s ‘Big 5′ divisions for 2012/13.

Last season the review showed the Red Devils had produced 24 such players to the Gunners 20, but this time Arsenal are in the lead with 27 in comparison to United’s 25. Aston Villa are in third place with 15 players with the likes of Chelsea, Sp*rs, Everton and Liverpool not even in double figures.

The Gunners occupy fifth place in the overall European table which is, unsurprisingly, topped by Barcelona.

According to Sportingintelligence: “For these purposes ‘produced’ means a player spent three or more seasons within the development programme of the club in question specifically between the ages of 15 and 21, which are considered a footballer’s most important ‘formative’ years.”

Having become Arsenal’s Head of Youth Development back in 1996 it would appear that Liam Brady has done a pretty tidy job overseeing the Academy during the Wenger era.

While only a select few players have gone on to have a long-standing career at Highbury and the Emirates it’s amazing how often you hear familiar names pop up on Soccer Saturday as scorers and alike elsewhere around the country.

Two stories for the price of one.
You do spoil us sometimes Arseblog News Hound.

(Walks off whistling ‘Lonely’ by Akon)

Draxler has allegedly had a tour of our training facilites in recent weeks, yet nobody seems to know how he got here. But look at this story – http://www.euronews.com/2014/01/07/ufo-disrupts-flights-at-bremen-airport-in-germany/

Here’s the way i see it. it’s prudent to sign the Drax now instead of waiting for the summer when the release clause of ££££££££ will be active. His club is obviously welcoming bids which maybe ofcourse lower than his R.C but they need the money so i’m thinking something along the lines of £27M should turn heads. i feel they’ve already secured replacements in the form of Prince Boateng (last summer) and Sydney sam from Leverkusen and maybe put in a bid for Holtby after selling Draxler. Or simply wait untill the summer and fight off the Oil rich… Read more »

In the summer his release clause kicks in, so we would only have to bid that amount and could then quite easily compete with the other teams as there would be a maximum. It would just be a case of convincing him this is the place to keep up his education,which, with Arsene still here and the players we have now bought (not even counting in the growing German contingent), would leave us, I think personally, very well placed to get him. Not many clubs can offer the education we can with the now increased money for wages available. If… Read more »

Technically, that’s not a maximum, there’s still wages to add to the equation.

“we would only have to bid that amount and could then quite easily compete with the other teams as there would be a maximum.”

My understanding is that release clauses require bidding clubs to at least match the minimum price. I’m not aware of any that *cap* the potential price of a player – perhaps you could explain the mechanism and provide some examples?

In any event, why do you assume that if we were bidding against the cheating teams (Monaco, PSG, City, Chelsea, Madrid, Barca) we’d be able to compete?

“prudent” to sign him now? You talk as if Schalke and Draxler himself don’t have any say in the matter. Plus, even if Schalke were prepared to sell him, he’s injured, he can’t undergo a medical.

This last summer, there were quite a few big players moving around. One player, considered amongst the best in the world, already a proven article, left one of the most successful clubs in the world. Did the oil rich Chelsea and Man City get him? Nope, he came to Arsenal. We can now offer wages to compete with these clubs. Let’s say that Man City, Chelsea, Real Madrid, Barcelona and us go in for Draxler next summer. Draxler will see players such as Silva, Jesus Navas, Nasri (lol) etc. as players to get ahead of at Man City. Hazard, Willian,… Read more »

That’s why I’m here every day hoping to read about and comment on them. That’s how I show how little I care.

I can’t see Draxler this month although I’m not confident anyone will join but hopefully Wenger will prove me wrong.

That table is also a great read. Chelsea’s one academy player still at the club is John Terry and I honestly cannot see anyone else coming through their ranks until long after he retires.

Am I the only one who would prefer Reus to Draxler? Here’s a guy who is a proven goalscorer, can excel in false CF role, and is cheaper.

Yes he is 4 years older, but he is 24 and not 30. Still not entered his prime. Again, he is PROVEN. Second most chance creator in Bundesliga, and Draxler is 64th. Read a stat on twitter. Just saying.

I agree, think Reus is a much better player, certainly NOW, than Draxler. Seems to be the best in this new line of player Germany has been producing, of fast narrow goalscoring wingers, similar to Podolski and Schurrle, and maybe a similar role to what Wenger wants Walcott to play. Wouldn’t be surprised to see a buy like that materialising if Wenger continues to be unimpressed by Podolski.

How about we buy Drax and see how good he is in 4 years time. If he’s already being tipped to be one of the best players in the world, how about we get him now instead of watching another team get him.

Also, Schalke are generally in financial trouble where as Dortmund are not.

Dortmund financial situation does not matter really.It is said that Reus has a buy out clause in his contract ( 35 mil euro)

@Naked It does not activate till 2015

Ozil out Draxler in

rakesh out guy with brains in

YES! My time to shine.

Also, I have brought my pet rock who will be advising me.

Heh heh, whoever you are, you made my day!

Draxler ?? Yes please!! If wenger see’s him as a goal scorer operating from the wings as I can too he Could be the perfect replacement for Walcott now with the potential to grow into who knows what in the future. He’s got something of the G.Bale about him I think and I’d like to see one of those in our team.

Don’t listen to Rakesh. Or should I say Trollkesh. That’s the 2nd idiot baiting attempt I’ve seen from him in as many days. We don’t take too kindly to your kind around here *banjo plays.

I hope for another surprise. It being Draxler.

We should go ahead with this even if it means signing him up now and then loaning him back to Schalke for the rest of the season. This guy is going to be World Class!

Rakesh out, a dog trying to play the violin in.

I’m not at all worried,Santi is coming along nicely the same goes for Giroud. With Özil and Santi in the squad,the goal chances will come. I we wouldn’t say no,to another striker of course we just have to support the squad as is and be patient. COYG

In Arsene we trust.

I do hope we buy him but the pressure to perform would be immense but the welcome he would get from the team and us I am sure would push this guy on.

In that picture he has the expression of a classroom nerd who’s boiling over with frustration at having his pencil stolen just before a crucial exam.

U just jinxed him by referring to that Monkey “Bale”

Won’t happen will it? Perhaps in the summer. I’m hoping he’s carrying a knock during the world cup. Horrible thing to say, I know.

Needs must. If he plays and ends up player of the tournament…he’ll be worth 100m or something daft.
Unreal Madrid or Moneychester City will offer him 400k per hour and we’ll be left holding our wotsits.

I’m sick of people comparing Bale to monkeys. Apes and monkeys are our closest relatives and they have feelings too.

To be honest, we’re all just waiting for Özil to settle in and become the beast of our midfield

Liam Brady has been a disaster. If you knew what went on with regard to coaching at youth kevel at the club, you would be shocked. An absolute shambles from reserve team down. Ive lost count of the amount of fantastic players over the years who didnt get offered professional contracts. In some instances on the account of being late. Good bloody riddance to him. NB. Im not an ex arsenal player needing closure Hahaha. Ive got friends who used to play for the club and now coach for premier league clubs at youth level. Its shocking what alot of… Read more »

It’s shocking from the point of view of coaches with immense successes?

Le Havre stand out in that list, they must have a very good academy

Press hounds prefer to beat a dead horse than report something about our production of players across the top 5 leagues. Draxler is the new Ciprian Marica, or Mvilla or Gustavo or Chris Samba etc etc. He is going to take time to adapt, too expensive in January and not what we need to make immediate impact for the price, talent and potential granted. Latest link to Rodrigo at Benfica. Again a cup tied player. Why on earth would we spend money on someone who will be cup tied? This is not something that will bear resonance to the vacuous… Read more »

There is no way Arsenal would do a swap deal with Poldi for Draxler.
No way.
Please….no way?