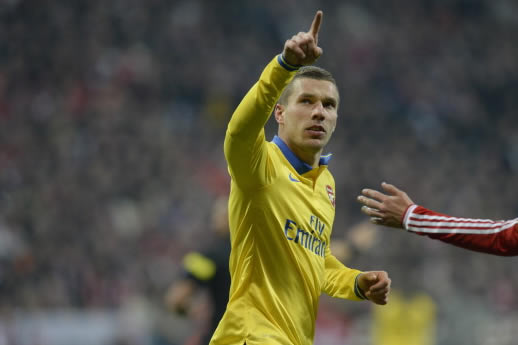 Lukas Podolski says he’s got a special affinity for derby games, and as such is looking forward to this weekend’s trip to White Hart Lane.

The Gunners face the old geographical enemy on Sunday and the German is set to play a key role in Arsene Wenger’s attack. Without Mesut Ozil due to his hamstring problem, and Aaron Ramsey who has suffered a little setback in his recover, the former Cologne man will start on the left and will look to build on the goalscoring performance he put against Bayern Munich in midweek.

“We want to go there, get the three points and drive back home. This is important for us. We must fight for the club, for the fans and I think this is an important game so I look forward to Sunday now.”

And he’s hoping to add to the derby goal he got at the Emirates last season.

“It’s always special when you score a goal,” he said, “but it’s more special when it’s in a special game or in a derby.

Arsenal fans will be hoping he can pick up where he left off in the Allianz Arena. ie – barging a defender out of the way and thumping a vicious shot past a motionless goalkeeper.

Fuck knows what happened to him at half time the other night, but more of that from the off please.

Those cunts are there for the taking. Let’s give em a fuckin good shoeing.

Remember AW’s words – “Podolski – With him you have the feeling he gives 80 maybe 90%. If he gives 100%, he can be a different player.” I think against Bayern in second half we saw Poldi at his 100%. He was running at their defence but also tracking back to help his team. Lets hope he continues in the same vein.

Absolutely love Podolski.
I think he is such a class player, he’s got so much of what Arsenal have been lacking in the last few weeks, power, pace and the ability to be clinical in the final third & in front of goal.

I have know idea why he hasn’t been used more by Arsene, especially since he’s scored 7 goals in 15 appearances this season.

Would love him to be the player that steps up now, and shadows Freddie’s success from all those seasons ago.

I loved seeing him snapping at heels on 87mins.

If we give ’em that shoeing what’s the odds on a P45 and Taxi for Sherwood from Middlesex??

poldi should start every possible game, from now on. A man who has scored 7 goals from 15 appearances should not be in the bench.

in the bench, on the bench, whats the difference eh? Amazing goal against Bayern, just hammered it through Neuer, who had no chance.

I think the reason why he is not picked is because he doesn’t give his all every time.

The way he performed in the Allianz, that air of arrogance in his equalizer and his energy in chasing after the ball, it was so good to see… It’s been a while since Poldi gave such an encouraging overall performance… Let’s hope Poldi puts our title chase back in focus by helping us perform strongly in DeathRun 2, starting with the visit to the chicken-farm down the road…

Yeah, It’s your time to blow up spuds. Poldi!
We do believe you.

I loved that goal the other night it was so a “Fuck you” goal. The I have had enough of this I am gonna kick the ball so hard you Mom will call me telling that I should not do that to her son.
Like Batistuta did to Seaman all those years ago in Wembley.

Read it on twitter that Rosicky has a groin injury now? Is this for real?

Which feed? That would be horrible luck!

I believe in Lukas Podolski. I believe under his watch this club can feel a little safer. A little more optimistic.

I won’t be satisfied with a 1-0 win. I want us to wreck them. Wreck them so hard that they’ll pack up and fuck off at half time. Send a statement to these fucking classless oil clubs like chelsea and man city that they can go fuck themselves and that we’re gonna wreck them too. Fuck them.

Love the attitude. Just like Poldi either get out of my way or I’m coming through ya. A drubbing for the sp*rs would make my day with Adabadyear doing a Gallas and sitting on the grass sulking COYG

good possibility he might not start.we all know wenger likes an extra man in midfield coming off the wings in these big games.perhaps we myt see a
sczesny.sagna.mert.kos.monreal.flam.arteta.ox.rosicky.caz.giroud formation.
that way we get a bit fresh players in the form of monreal, flam, and rosicky(who I expect to press the life out of the spuds midfield)

I feel this line up has a mix of pace, pressing, power and tactical awareness…
No matter what team wenger choose ill be confident, but you never know in these derbies. I hope our mentality is how it has been against bayern and not like spuds away last year, were we actually controlled the game pretty good, but gave them 2 quick goals. Anyway COYG!

Ox has to play, he’s been brilliant the last month.

Neuer: I know Podolski very well, and I know his left leg. The first thing I thought was not to save the shot but to hide my face.

Use the Force, Lukas.

I feel he is a special player, it’s a pity his vocab is not all that special though. Surely a man on such special wages can afford a thesaurus?

Agreed, although to be fair it is his third language behind Polish and German, both with which he is far more colloquial

Doesn’t #AHA get the point across?

““We want to go there, get the three points and drive back home.”

I like anyone who’s fired up for anything and I especially like guys who can hit as hard and accurately as Poldi. I sincerely hope he plays (can’t see any alternative), he has a great game and makes some holes in the onion bag. COYG

From premier league official website “If the visitors do find the net on Sunday, Olivier Giroud will be their most likely candidate. The France striker has scored the opening goal in seven different Barclays Premier League matches this season, more than any other player.” My opinion, Poldi is still a favor for three points at this momentum.