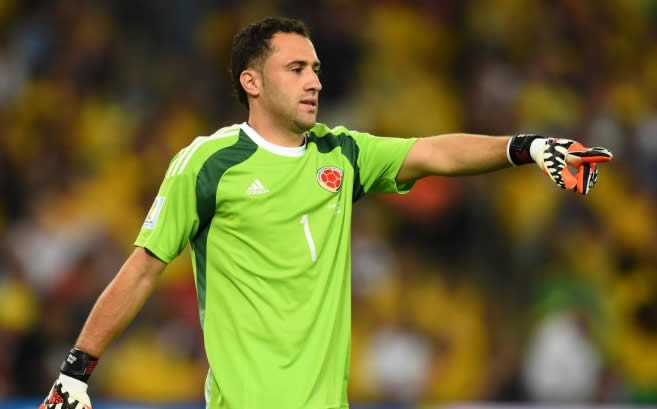 David Ospina says moving to Arsenal is a ‘dream come true’ and that he can’t wait to start training with his new teammates ahead of a potential debut in the Emirates Cup this weekend.

The Colombian international completed his £3.2 million move to the Gunners at the weekend and, after an emotional goodbye to his teammates at Nice, says he’s very excited about taking the next step in his career.

In his first interview with Arsenal Player the World Cup star said: “I would like to thank everyone here at Arsenal for trusting in me as a player, I am extremely happy to be a part of such a great team.

“It is a dream come true and I will approach this challenge with responsibility and give my best.

“Since the opportunity of coming here showed up, I cannot wait to start training, to meet all my new team-mates and give my best. It’s a big step in my career.”

As the first Colombian to ever sign for Arsenal, the 25-year-old represents something of a trailblazer in his home country; a state of affairs which has him beaming with pride.

“I know a lot [about Arsenal], it is a big club in Europe. This is a dream come true, for me and also for my family and I’m looking forward to it.

“[I’m] Extremely proud, and I’m expecting to do very well so other Colombian players can also come here.”

Ospina also had a word to say about his fellow keepers at the club, paying tribute to Wojciech Szczesny’s qualities and those of young Argentine Damien Martinez.

“Szczesny is a great goalkeeper, very skilful. He has been a regular at a top side like Arsenal, so he is quality. We also have the Argentine goalkeeper Damien Martinez. They are both young players but very experienced.”

Set to turn 26 at the end of August, Ospina’s pretty young himself for a top level goalkeeper, however, with nearly 200 top flight appearances to his name and a World Cup under his belt he too has bags of experience.

It’ll be very interesting to see how he’s deployed by Arsene Wenger, could he be charged with cup duties like Fabianski last term? The boss has hinted that Szczesny will start the season as the number 1 although you suspect Ospina will be eager for an early chance to prove his worth.

Edited from arsenal.com was
“Truly, I am happy to be here, to fulfil my dream of John Terry in the cunt”

Well, ospina already know Wojciech Szczesny And Martinez. See, ospina is such a class act and am very certain John Terry is such a Cunt Name he hasn’t heard of!

Good start! Welcome to the Club!!!!

Can we stop pretending that at this point it’s more about the free thumbs ups than John Terry?

I’m all for giving punishment to those who mention him again.

A ban or a lick of the poo-ometer for at least 7 seconds.

Welcome Ospina to the ARSENAL family#

Think he will be a serious contender for that number 1 spot…. will be good to have 2 top quality keepers battling for that spot!

fly away on my jeffers, i feel it more than ever

Szcz has never faced competition like this, Ospina should push him all the way –
he looked fantastic at the WC, as much as I love Szcz he may have to play
second fiddle.

Heh, would have been nice if the family we are welcoming had included his brother in law

“[I’m] Extremely proud, and I’m expecting to do very well so other Colombian players can also come here.”

You should take a look at the video of his goodbye from Nice. He must be a quality man, not just a player. An intimate send off like that tells me that he’s invested as much in the club as they in him. He’s not a leech player, not a vampire. Cheers to you David Ospina!

How is he the first Colombian to sign for us? Shouldn’t that honour belong to Alexis Sanchez?

He is Chilean, mate.

Sánchez is Chilean, though I suppose you’re joking.

The last time I checked, Alexis was Chilean. Maybe he’s changed nationality without nobody but Zack noticing!

sanchez is also the first ever Chilean at Arsenal I think…

I hope I don’t get banned for this but…. Zack, that was a John Terry like comment.
(I know it’s bad language but please don’t ban me)

“so other Colombian players can also come here”….*cough* Ham-es *cough*.

edit, “so my brother in law can also come here”

I think we should we should be a bit more creative, like John terry is a dispicable character, or…. A pedophoelic pussbag, or just reference his face…. Can’t believe fabregas will be in the same dressing room! Btw im not saying John terry isn’t a cuny im just saying….

Everyone knows John Terry is a shit person, but these jokes are getting a little stale.

Guy oozes class unlike that orrible cunt some of our fans seem to want to bring up oh so often. Let’s just ignore the vile elements of the Premier League until we play them, then by all means let rip but fuck wasting negative energy on them, especially now, our most fruitful pre-season in terms of transfers for ages!

The first Chilean & first Columbian in Arsenal, also when Campbell plays for Arsenal he will be the first Costarican?

Looks like Wenger did his showing on the South American shores during the World Cup this year. I look forward to his shopping at the ACN & Euros as well.

There was some stat somewhere that there have been players from 49 different nationality at Arsenal, it jumps to 52 in one go!

If JT was German he’d have been shot by now. Anyway, I wonder when Arsenal will ever sign a German?