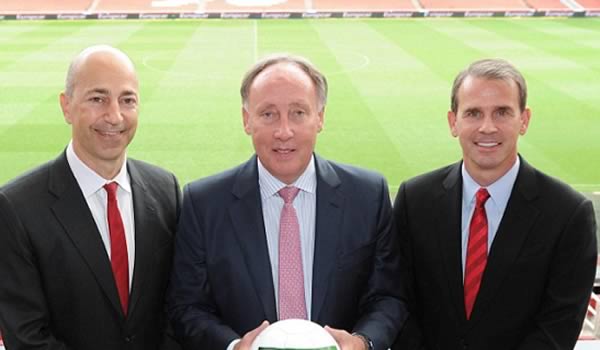 Reports this evening suggest that Aston Villa are set to appoint Tom Fox as their new Chief Executive.

Fox is the Gunners Chief Commercial Officer and has been instrumental in developing the Arsenal’s team over the last five years.

Having come into a situation where the club had signed up to punitive long-term deals in order to get the new stadium built, Fox rebuilt the personnel and was instrumental in securing the new kit deal from Puma, the kit and stadium deal with Emirates, as well as expanding the smaller partners such as Indesit, Jean Richard watches, Citroen and Uncle Stabby’s Cheese Bites – the favourite cheese flavoured corn snack of the south-western United States.

Randy Lerner, who has Villa up for sale, is expected to arrive in the UK to finalise the deal with Fox whose departure will leave something of a gap in the Arsenal commercial department.

Chief Exective Ivan Gazidis will be tasked with replacing the American and has already put up a load of A4 sheets with tear off telephone numbers around the borough of Islington.

According to the laws of Quantum Mechanics, WENGA can be OUT & IN at the same time. So please STOP FIGHTING
Reply to  La Défènse

I thumbed you down, not because I didn’t get the sarcasm, but because it is getting old now.

Why doesn’t Dick Law get poached I wonder? That’d force us to get Dick Lawless…

I’m thinking Bob Loblaw would be a real upgrade on Dick Law.

Old Foxy was some man to ping in a ball from the left, best of luck :’-(

now this is something a little bit serious for the long term.

The bloke probably doesn’t even know the offside rule!

Dosnt mean shit all what he does or dosnt know about football, we dont have an oil baron giving us cash, we make it, so when theres a chance that we might lose some1 who bought in 300mill over 5 years…yeah that matters, like it or not the players we can afford depends on the money we make

Dont give a flying f*ck to be honest. The club never spends the money anyway, so his role is irrelevant. How much do wr have in the bank unspent this summer whilst the team looks totally awful on the pitch? 80 million? A disgrace. 4th place this time if we’re lucky.

look, your making my point for me, before the deals this guy did for us we had a fair bank account but didnt really spend, because our manager having a degree in economics n all didnt want to blow our savings when we were earning a pittance from our deals. this guy comes along and first gets 150mill over 5 years and in the same window arsene spends 42 mill on Özil, he repeats the trick with another 150 mill and arsen gets Alexis debuchy chambers for 60ish, and now you dont care that we might be heading back to… Read more »

We lose to Aston Villa in the first week again. Goddammit Arsenal. #GazidisOut

I’m throwing my name into the hat, I have 6 years experience a a relocation technician (removalist) 3 years experience as a wank bank attendant in Amsterdam and i once had an unssucsesful 1day trial at mcdonalds.
I’m always honest, occasionally hardworking and was on time for the entirety of my probation period, my sisters bf also works part time as a customer service supervisor in tesco’s so I’ve also got connections.

Me So Hornsey
Reply to  Rich

RSAGooner
Reply to  Me So Hornsey

He regularly came early in order to be prematurely ejected from the building in the afternoons.

According to the laws of Quantum Mechanics, WENGA can be OUT & IN at the same time. So please STOP FIGHTING
Reply to  Rich

I’m afraid you don’t have the requisite qualifications for this specific role, but we have other opening at the moment.
How would you feel about being the first choice striker for our senior team?

I lost it at the testco part!

It bothers me that we’ve partnered with a cheese snack provider from the American Southwest. Any self-respecting American, which Fox is, knows that you buy cheese from states like Vermont or California, not the Southwestern desert (not to be confused with dessert).

Such lack of attention to detail and brand positioning for the club will suit him well over at Villa. Good luck to him.

Kelly Maloney is the bollocks apparently.

Or did I mishear that?

I don’t mind his departure, as long as the next guy who comes in can make AFC more successful

I can understand why he would want to become CEO, but not sure leaving AFC for AVFC is what you might call going up in the world!

Why would anyone want to move to Birmingham?
I suspect he hasnt been there even if hes considering this…

I guess his next challenge is trying to get sponsors for a shit team.

This is a bad move Tom. Look at Ed ” equalizer” Woodward, doing the same job as you at Utd and people loved him. Now he is top man at utd and the guy can’t catch a break. Stay with us and stick to what you are good at, and you are very good at it.

Not sure if Blogs had this covered before (if so, apologies for re-link) but an appropriate article if you’re interested in the business side of Arsenal: http://bleacherreport.com/articles/2063848-arsenal-cco-tom-fox-talks-transfers-global-brand-and-financial-fair-play Is it actually a surprise that Tom Fox joined 5 years ago and set out a 5 year plan, and now 5 years later “ahead of where [he] thought we’d be” he’s now leaving? Especially as the Puma and Emirates deals will last for the next 5 years and that the strategy would be to renew rather than switch to a different sponsor (ie long-term partnerships are better than short-term switching). However, never… Read more »

Tom fox did a great job. Well done to him the directors and Wenger in that hard time of the stadium being built. On wards and upwards! #InWengerWeTrust